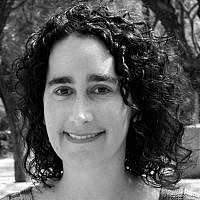 The Blogs
Dalia Rosenfeld
Apply for a Blog
Advertisement
Please note that the posts on The Blogs are contributed by third parties. The opinions, facts and any media content in them are presented solely by the authors, and neither The Times of Israel nor its partners assume any responsibility for them. Please contact us in case of abuse. In case of abuse,
Report this post.

It was time for my husband and teenage son to have The Talk. I had been after him for months already to get it over with, and from various anecdotes that Natan had brought home, it was clear that if we didn’t sit him down soon, we would wake up one morning to find our son embracing a view of the world cobbled together from snatches of conversation between classes and Youtube videos that had managed to slip between the cracks of our parental controls.

“Son, there’s something you should know,” my husband started.

The tone was just awkward enough to turn our teen’s eyes to the ceiling.

Sitting as they were on opposite sides of the couch, it was easy for me to insert myself between them and take over. I could see my husband still considering how to proceed, and time was not on our side.

My husband having fled the room, it was just the two of us now. “Sweetie, when I was in high school in Indiana, it was my physics teacher who announced to the class one day that Hitler was Jewish. But in this generation it appears to be history teachers. Okay, I have no idea what that means, but Zeyde and Uncle Gavriel are both scholars of the Holocaust. Why don’t you ask them?”

A liberal oasis in a conservative state, Charlottesville, Virginia (home of Jefferson’s University of Virginia) hardly qualifies as the most challenging place to raise a Jewish family. The city boasts a synagogue, a Chabad house, a Bity youth group, choir, Hadassah chapter, and enough Jewish faculty to make for multiple minyans if anyone ever felt a calling to crack open a siddur.

But outside the borders of this small heimisch comfort zone, a more unheimlich one sometimes makes an appearance, a space where the myths of old have survived, but in a new, more palatable (and hence even more insidious) form: Back in my day, I was still called a Christ Killer, whereas today my son is merely told by a church-going classmate that the “Jews killed Jesus.” Back in my day, my biology teacher let it be known—and loudly—that evolution had no place in a school curriculum, whereas in my son’s science class this year, he learned that everything in nature has evolved except us. Back in my day, “Jew me down” was a popular expression in the lunchroom; these days, Natan informs me, Jews are merely rich. And the same history teacher who announced that Hitler was Jewish could not praise Elie Wiesel’s NIGHT highly enough (after admitting he was “not much of a reader”).

My son did not call Zeyde or Uncle Gav, but I did.

“It’s a totally stupid, unfounded allegation, but one hears it pretty often,” Zeyde explained. “It’s the last thing that teachers should be telling their students.”

Next Shabbat we will attend the bar mitzvah of the Chabad rabbi’s third son, Menachem Mendel, an event that, for a few blissful hours, will paint the picture of a small southern town bursting at the seams with Jews, the only challenge to our identity being finding a parking spot in time for the Haftarah. The invitation ends with the words, With prayers for the immediate Redemption. After reading it, my youngest son, Adin, hands it back and asks what that means.

“It means that even if the present isn’t perfect, we can always work for a better future,” I say, and the answer seems to satisfy him. He returns to his Asterix and Cleopatra.

Adin just turned ten. In a few years, my husband will have to sit him down for The Talk. The old myths have become commonplace; what new ones will emerge by then, and will they shock the conscience or merely be shrugged off?

About the Author
Dalia Rosenfeld is a graduate of the Iowa Writers' Workshop. Her work has appeared in The Daily Forward, Jerusalem Post, Jewish Journal, The Atlantic Monthly, Agni, Mississippi Review, Michigan Quarterly Review, Bellingham Review, Moment Magazine, Zeek, Jewcy, and other journals. She lives with her husband and three children in Charlottesville, Virginia.
Comments