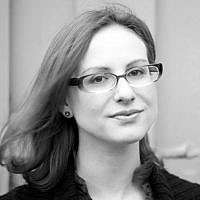 The Blogs
Jenn Book Haselswerdt
Apply for a Blog
Advertisement
Please note that the posts on The Blogs are contributed by third parties. The opinions, facts and any media content in them are presented solely by the authors, and neither The Times of Israel nor its partners assume any responsibility for them. Please contact us in case of abuse. In case of abuse,
Report this post.

Kveller via JTA — My 4-year-old son can’t get enough of dragons and monsters, and — as is appropriate for his age — asking questions about dragons and monsters. Books about the topic have completely taken over our library shelf. He loves reading legends and contemporary stories about them, from luck dragons to treasure-greedy Wyverns, from the tiny Japanese Hitotsume-kozō to the skin-and-bones man-eater Wendigo. (“Dada should be afraid of him, right? Because he eats men, and Dada is a man. But you and I don’t have to be afraid of him because you’re a lady and I’m a kid.”)

One monster in his very favorite book of the moment is Cerberus, who I’ve always been told guards the gates of Hades. For some reason, the writers of this book chose to use the word hell instead of Hades. I generally don’t change words in books because I can’t be sure that other people will change the same words, and that can get confusing for an emerging reader. So, “hell” it was. And, thank goodness, my son didn’t ask any questions, just took it at face value.

The first seven or eight times we read it.

So: “Hell is a place some people think we go after we die if we make really bad choices.” OK, answer accepted.

Then: “Mama, what do we think happens after we die?” Oy.

We’ve talked about some big questions. My son knows, for example, that he grew out of an egg in my uterus before the doctors took him out of my body. (He hasn’t asked how he got in there yet.) He knows that when people’s and animals’ bodies run out, that’s called dying. But we hadn’t talked about what happens after that yet.

I bought myself some time by asking, “What do you think happens after we die?” But although he’s generally a very imaginative kid (see: he’s pretty frequently a dragon himself nowadays), he didn’t have any ideas.

One of the things I love about Judaism is that a question brings up more questions, and many ran through my head over the next few seconds. I’m a Reform Jew who prays every year to be written into the Book of Life, for God and the people around us to forgive our transgressions, and who vows to do better in the coming year. But we don’t really talk about what happens after our pages in the Book of Life have come to an end. What happens, if on Rosh Hashanah it is written and on Yom Kippur it is sealed, if we won’t be around to see the next High Holy Day?

Scholars talk about olam haba, the world to come, but what does that mean? There are souls, but we really don’t know what that means, and our sins and mitzvot are counted, but for what? Reform Judaism doesn’t have a definite answer or an official position. We focus on life here on earth and doing things to heal the world.

What happens after that?

I thought about what I would have wanted to hear when I was my son’s age, about his love of nature and family, about my promise to myself not to lie to him. I thought about my spiritual background and my husband’s background in science. All those thoughts about the High Holidays made “Avenu Malkeinu” run through my head. And then, other words that have been ringing in my head since I was very, very small:

And we’ve got to get ourselves

Back to the garden

“When you die, your body goes into the earth. You know how you learned about composting in camp? Well, your body does the same thing: After a long time, it becomes dirt. That dirt feeds the plants. The plants feed animals. The animals might feed other animals. Or they might die and become dirt and feed other plants.

“There’s also energy inside of you. That energy has been around for a long, long time. After we die, our energy goes out into the universe. I don’t know what happens to it for sure, but it might eventually make a new star.

We do good things for the world, even after our energy has run out. And that energy is stardust.

I don’t know if he completely understood it, but I got a big hug and a smile. Which is always the goal.

And then he went back to asking questions about dragons.