The Blogs
Ruth Lieberman
Apply for a Blog
Please note that the posts on The Blogs are contributed by third parties. The opinions, facts and any media content in them are presented solely by the authors, and neither The Times of Israel nor its partners assume any responsibility for them. Please contact us in case of abuse. In case of abuse,
Report this post.
Some of you have had the opportunity to visit Tel Aviv’s high-tech centers with the Yes! Israel Project and our terrific guides. We’ve seen young entrepreneurs put fantastic ideas into motion, leading the world in technology breakthroughs and rendering attempts to boycott Israel just about impossible in this day and age.
But Tel Aviv wasn’t always the bustling metropolis of today. Its beaches were about all it had going for it, and even those were outside the protective walls of Jaffa, where few ventured and none lived, in the mid 19th century.
The process of Jewish movement to life beyond the walls of Jaffa began in the second half of the 19th century. If we were touring the area together – an impossibility these days so we’ll have to use our imagination, along with some great historic photos – we’d first visit the neighborhood of Neve Tzedek, perhaps have tea at one of the Shlush family’s homes. In 1890, the new kids on the block arrived: the Neve Shalom neighborhood. Soon after that, in 1882, with the cholera breakout, the ruling Turks didn’t allow the Jews to bury their dead in Jaffa, so Mr. Shlush donated land on Trumpeldor Street for the Jews of Jaffa – this cemetery can still be visited today, with its historic family names as testimony to Tel Aviv’s earliest beginnings. 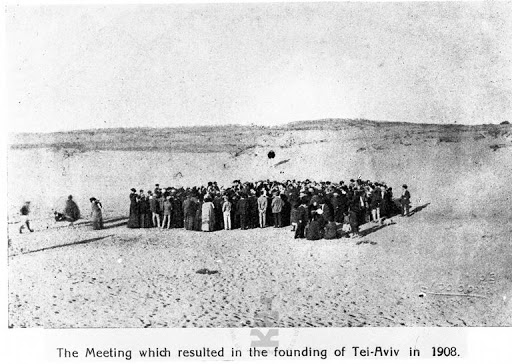 In 1904 a Jewish guy named Akiva Aryeh Weiss arrived in Israel from Lodz, Poland. He was rich, he was a Zionist, and he was very against the proposed plan to set up a Jewish homeland in Uganda. However, he was also a huge fan of Herzl, known to many as the father of modern Zionism, and wanted to commemorate him, to set up a new city in the land of Israel in his memory and inspiration.
Petach Tikvah, Zichron Yaakov, Nes Ziona, and other settlements had already been established. Akiva Weiss returned in 1906 to the land of Palestine with his whole family, a three-month-old son in tow, named Herzl! In that same year he wrote his Zionist vision, and led the establishment of the Ahuzat Bayit group in order to set up a new city on the sand dunes just north of Jaffa, where the fledgling communities were to be found.
Weiss spoke passionately:“I have a plan as to how we may build 100% Israeli cities… The streets will be broad, the homes will have running water and be surrounded by gardens, electric lights will blaze in the streets and houses and industry will have electrical power day and night. A comprehensive sewage system will be established and everything required for a modern city will be installed.” His words aroused dispute and questions regarding such issues as where the land would be purchased and how the project would be financed. But Weiss had prepared well for that moment and he clarified that the city would be built as a private initiative, aided by a commercial loan. His proposal was accepted. And in April, 1901 – on Passover, just coming up on our calendars as well – the famed lottery took place and the birth-date of the first Jewish city made history. 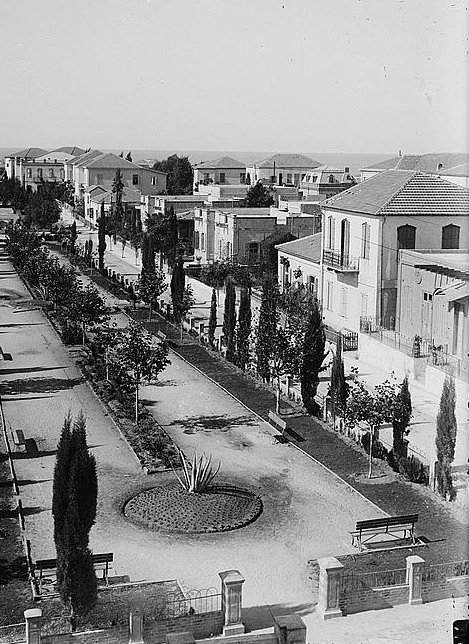 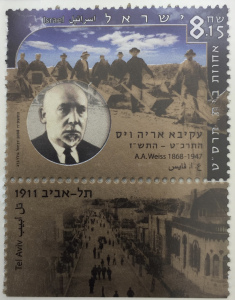 The stamp commemorating Tel Aviv’s centennial depicts Weiss against a backdrop of the ‘wheelbarrow workers (Eretz Israel Museum, Tel Aviv). His home at the corner of Herzl and Ahad Ha’am streets, recently renovated, appears on the tab on the right. Catch a glimpse of the local shoreline in the background.
Historically, the Land of Israel boasted four holy cities – Jerusalem and Hebron from ancient biblical times, and Tzfat & Tiberias from ‘modern’ Second Temple period & later centuries. Now, for the first time, the fledgling return to our land included the very first ‘Israeli’ city in the world. Weiss spoke of Tel Aviv becoming the New York of Israel, and his city in fact became the earliest Zionist start-up!
There’s so much more to the story of fledgling Tel Aviv, but I’ll leave it at that for now. Start planning your next trip to Israel, to join me for more, in person – God willing, after this corona virus is defeated. Til then, sign up for our newsletter to get more straight from Israel, real-time – ancient and modern – send me a message here, to join.
About the Author
Ruth Lieberman is an Israeli-based political consultant and licensed tour guide, combining her love of Israel with political acumen to better Israel's standing both at home and in the eyes of the world. She has consulted for political leaders in Jerusalem and in Washington, from work on election campaigns to public advocacy and events. Her tours in Israel connect Biblical history to modern realities, to highlight Israel's achievements and promote its policies.
Related Topics
Related Posts
Comments