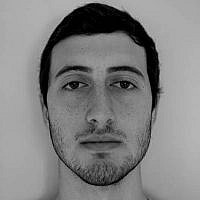 95 minutes of reality escape into the comic fantasy a world where injustice becomes a subject of entertainment. That is my way to describe Sameh Zoabi’s “Tel Aviv on Fire”, the co-production that was chosen to represent Luxembourg in the foreign language competition of the American academy awards.  The credit must be given to Zoabi, as one of the few creators who understand how to produce comedy from the Israeli-Palestinian conflict and for making a feature that does not aspire to exhibit reality, but to mock those who create it. Is it a cinematic masterpiece that delivers new concepts and opens our mind? No. But who determined every film has to be? It’s recommended because it’s amusing, well written and brings some relief from the heavy dramas with a sharp political massage that occupy to much space in your mind.

The main variation between the “usual” screen content of its genre to this film is that the most of it was shot in a studio, whether the soap opera set or even the office at the checkpoint, a great part of the movie is shot in a built up set with fake lightening and the analogy between them and the scenes shot in an “authentic” location, and the use of natural light creates contrast between the glowing life inside the shooting set to the miserable reality outside. The ornate soap opera inside the film becomes the mirror image of this film compared to the real world.  And even if Sameh Zoabi chooses to focus on the fake fantasy, he keeps reminding us reality every once in a while, with shreds of street shots or a scene next to the separation wall.

Another reason to praise Zoabi is the simplicity with which he touches the Israeli-Palestinian conflict. It even crosses the line to the definition of “dark humor”. Not a customary act in such a sensitive area, but he still chooses this tool of satire to strengthen the subtext, as quoted in the film “Not everything in life is Politics”. Finally, somebody said it. And finally, somebody acted according to it, by created a cheerful content regarding the geopolitical situation in Israel and the west bank. An imitation of a Hollywood production and a witty script that adapted itself into our obscure conflict.

In conclusion, “Tel Aviv on Fire” is a very qualitative refuge from the Israeli-Palestinian genre that had been reinforced during the years. A bright script combined with a fine visual touch, makes it nice and easy to watch, even for those who prefer the quality type films.

About the Author
Yair Stolik, born in 1998, lives in Nordiya, Israel. A cinema major in high school, he is now a Cinematographer in the IDF Spokesperson's unit.
Comments