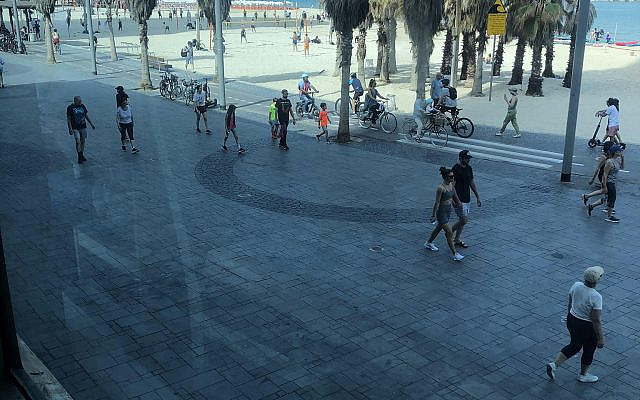 To start with, there’s the Mediterranean Sea, with its long sandy beaches, kept relatively clean by the municipality, with designated areas for people to play games (ah, the dreaded ‘matkot’ with their constant noisy batting to and fro of a ball against wooden bats), another area for dogs off the leash (but they must be well-behaved) with a special shower for dogs, and the wonderful kilometer after kilometer of the promenade. Anyone venturing out early in the morning (say, 6 a.m., even on a Saturday, supposedly the day of rest), as I did, encounters throngs of other like-minded people, whether singly, in pairs, small groups or even large groups, walking, jogging or running along it. Some people even manage to conduct a conversation as they jog, which seems almost superhuman to me. There are couples or groups wear matching outfits bearing slogans or designs aimed at attracting attention, but most people wear modest sports gear, and of course the ubiquitous sports shoes. And of course, there are also people walking their dogs, though always on a leash. I didn’t notice any dog-poop on the promenade, so presumably their owners were dutiful about cleaning up after their pets.

Always accompanying us as we made our way past the enticing sandy beaches was the constant sound of the waves as they crashed onto the sand. Even if one just stands and looks at the sea, with the azure sky above and the occasional palm tree or scrubby bush breaking the monotony, we feel that the salty sea air is doing us good.

It all takes me back to the summer holidays of my childhood, when the family would decamp to a rented house in Bognor Regis, on England’s south coast, where the chilly waves of the Atlantic ocean would embrace us children as we bravely waded into it, trying to avoid getting entangled in the ubiquitous seaweed. I haven’t ventured into the sea in Tel Aviv, so don’t know if there’s seaweed there or not. What I did notice, however, is that at various points along the promenade Beach Libraries have been set up, where books may be borrowed (and users are requested to return the books after using them).

The city of Tel Aviv itself is awash with eateries, pubs and places of entertainment of all kinds, though we mustn’t forget that it is, after all, a city where real people live – and that house prices there are among the highest in the country.

Our long weekend there was occasioned by a concert of the Israel Philharmonic orchestra and a performance of Handel’s opera ‘Alcina’ within the space of three days. While on this occasion we didn’t use the opportunity to visit the impressive Tel Aviv Museum, we were able to enjoy the delights of the city in various other spheres. For example, as we ate breakfast in our hotel overlooking the sea we could witness people running and playing on the promenade and the beach, and nearby nets had been set up on the sand enabling people to play energetic games of volleyball. The sight was a veritable perpetuum mobile of active energy and sporting prowess.

The one jarring note was a notice at the side, indicating a path leading up towards the town bearing the message ‘Tsunami evacuation route.’ I wonder who thought of that contingency in the placid Mediterranean Sea.