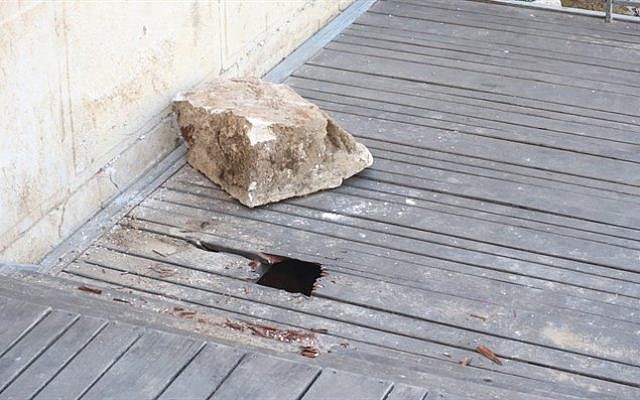 A bolder hurtling down inches away from one person praying in a for the rest empty Reform Temple Mount Wall prayer area raises a lot of questions.

Was this “just” a natural occurrence? Things happen. Skeptics (afraid to have to acknowledge G^d’s Hand and Presence) can so maintain their denial of the metaphysical. Rabbi Lopes Cardozo explains that G^d’s Assistance is so clear in Israel that He needs to perform daily miracles to help the non-religious to stay outside of a religious way of thinking.

Or was this a sign of Divine anger? Then, was it a condemnation of the multi-gender Kotel section? Or was it anger that the “Ezrat Yisrael” section is still not built? Or was it – the other way around – Heavenly compassion that no one got hurt? At regular times, it has recently been very crowded there – with ultra-Orthodox worshippers. The Reform, Conservative and non-religious don’t daily show up for prayers there.

In fact, one can see this averted disaster as Heavenly upset about the disgrace of withholding children to single men and gay couples; or of the demonstrations against this bigotry. To add to the earthquakes. To signal that Redemption is close and we’d better shape up. Or as reward for the crowd yesterday at the main Kotel Plazza singing “we believe in the coming of the Redeemer, even if he stalls.”

It seems that one can take it any way one wants. Except: declaring it a simple coincidence is no winner. Even the Six-Day War has been “explained” (made plain) to remove any compulsion to take this as supernatural. That’s nice and sweet, but it’s kind of contrived. Especially as miracles systematically surround the survival of the Jewish People.

Another – brilliant – way to neutralize the notion of this being a miracle is by saying that although this occurrence is unheard of, it’s actually nothing special, can happen any time to the whole of the Wall, and people should stay away from it altogether. We’re looking forward to the authorities putting signs on the Wall with “danger of life” (which is the funny way in which Hebrew and English speaker say: danger to life, danger of death).

In the question if one needs to inspect meticulously the situation of the Wall or of our soul, I would like to suggest: both.

In any case, one can only feel shock when one sees in a security camera’s footage the enormous stone weighing about 100 kilograms from the Retaining Wall of the Temple Mount jumping out and crashing 10 meters lower just steps away from the only praying lady there. The stone fell sideways (because of the tension it was under), it popped out. If it would have popped out in the other direction, it would’ve hit the lady.

The emotional take of a disaster narrowly averted is to call it a miracle.

Rabbi Cardozo explains that a miracle is not something that upsets the laws of nature but rather something natural, unusual and favorable that strikes as extremely good luck because of its timing (and place).

The Torah explains the Splitting of the Sea of Reeds coming after the wind blowing all night. Yet, no one can deny that a sea splitting is rare and doing that just as the Jews need an escape is outright miraculous.

The rabbis explain that the responsible thing to do when people get away miraculously or when one hears of a disaster is to check one’s moral state. Not to soul search, contemplate if we should start improving, is like callously (and arrogantly) rejecting a warning that could be Divine. Such an arrogance is possibly graver than some agnosticism. (Since one cannot disprove G^d, people who go by logic must be either believers or agnostics.)

The timing of this bolder coming apart from the Wall in which it was lodged for literally thousands of years is curious enough. Miraculously, it fell in an area reserved for egalitarian services which was almost empty. Was the only woman who was close by, extra-warned by the Almighty or was she extra-honored in personally witnessing this warning to the Jewish People? For reasons unknown to me, she stood just outside the area fenced off and equalized for prayer. If she had stood inside the area she would not have survived. She owes us all a story.