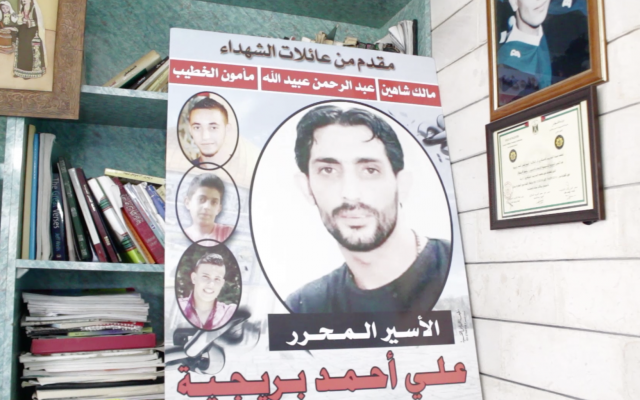 “You are our friend.”

So said the man who had just returned from 12 years in an Israeli prison. We were driving from his home where I’d gone to meet his mother, the first Palestinian female mayor in the West Bank. A poster featuring his somber face stood in his family’s living room.

“I’m not your friend,” I replied. “I’m giving your people a voice. That may be better.”

The two of us, and his brother, were on our way to the Wall Road, which separated their village of Al`Masara from the Israeli town of Efrat. There was no wall to speak of, just the remnants of one that had never risen, owing to the combined efforts of people who would have been separated by it.

The brothers wanted to give me a panoramic view of their neighborhood. Shortly after we parked on the side of thee road, several soldiers in an Israeli Army jeep appeared. I handed one of them my passport and explained why I was there. Except for a few tense moments when one of my guides took out his cell phone and began recording what was happening, the encounter ended without incident.

“The Mossad has your number,” a friend of mine said, after I told him about it.

A former security specialist for the Israel Defense Force, he spoke with certainty, but  I’ve grown wise to how friends and non-friends alike speak in the Land. My friend didn’t have actual proof that the renowned security agency had me in its files. He based his opinion largely on the fact that I had a phone bill with charges from the Palestinian National Authority, because of calls I made in their region.

People call the area I visited Judea, Israel, Palestine, the Occupied Territory, and the Disputed Territory. To avoid arguments, I avoided those labels and spoke specifically about visiting Efrat, Al`Masara, Bethlehem, Carmel, Umm Al Kair, and the Gush Etzion Winery.

This was three years ago, when I produced a documentary to mark the 50th anniversary of the Six Day War. The film is tame by today’s standards. I expose no dark secrets about the IDF or Palestinian terrorists, glorify no violence.

None of my interviewees — three Jewish Israelis, a Bedouin, a Palestinian Muslim, and a Palestinian Christian — comes off as a saint or a monster.  All of them speak plainly, sometimes passionately, but there is no fire, no brimstone.  My goal was to produce a piece that was fair, rather than opinionated, inflammatory, or sexy.

Visiting Al Ma`sara alone during the month of Ramadan, I might have been taking a chance, but I never felt threatened. After the former convict called me a friend, I told him and his brother that whenever Palestinians resorted to terrorism they alienated Jews like me who were more open to listening and telling their story. Neither of them argued with me, and we parted amicably.

Since then, having passed the necessary background checks, I am now a citizen of Israel ten days shy of celebrating the one-year anniversary of my arrival at Ben Gurion Airport with a planeload of American immigrants. I’m not a prominent activist, and my quiet documentary has not caused a stir on the festival circuit. So, I imagine that if the Mossad does have my name, I’m probably not on any special watch list.

Before COVID-19 struck, President Trump gave Prime Minister Netanyahu the green light to annex chunks of the West Bank, and the prime minister looked raring to go. Then the president’s son-in-law flashed Netanyahu a yellow light, and Bibi paused.

Now, with a second wave of COVID-19 threatening, the economy reeling, and people protesting against Netanyahu’s government, the topic of annexation may be lost in the fog of tear gas and the roar of water cannons.  Eventually, the issue will return to the fore with a vengeance. I’m only an Israeli newcomer, so I’m not ready to speak with certainty, of course.

I have not been back to the Territory since completing my documentary. Meanwhile, I’m no longer as free to move about the region as I was when I held only an American passport. The situation has changed so much since I last visited Al M`asara, I’m not sure how I would be received if I returned.

It’s hard to be a centrist these days.