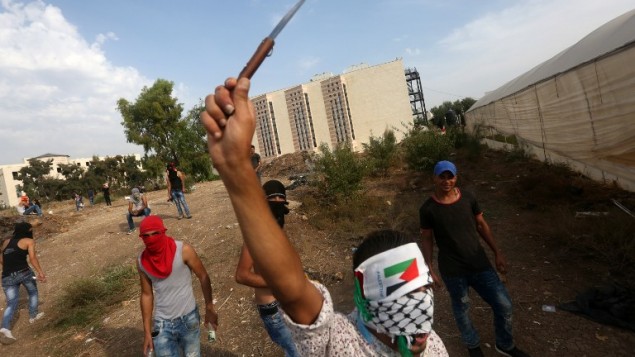 A Palestinian youth raises a knife during clashes with Israeli security forces in the West Bank city of Tulkarem, October 18, 2015. (AFP/JAAFAR ASHTIYEH)

Terrorism is the most abhorrent of political tools: it is a purposeful act of violence directed primarily against innocent civilians in order to create intense fear and sow widespread havoc to promote particular political goals. The use of terrorism is vile: it is merciless, indiscriminate, cruel, and beyond inhumane. Any act of terrorism — whether in Paris or Jerusalem, in Bamako or in New York, in Damascus or in Bangkok — is unconscionable. The broad condemnation of the latest unspeakable wave of terrorism is more than justified; the frequent conflation of these actions with their motives — which confuses cause and effect — is not.

Israeli officials, often backed by the media, have contributed to this discombobulation. Immediately after the horrific events in Paris last weekend, Prime Minister Netanyahu declared: “In Israel, as in France, terrorism is terrorism and the force standing behind it is radical Islam and its wish to destroy its victims.”

The mayor of Jerusalem, Nir Barkat, echoed these thoughts: “The whole world now understands what we experience in Israel and Jerusalem — murderous terrorism motivated by the same hatred and a mission of death against innocents in the West.” Gilad Erdan, the Minister of Public Security, by giving these comparisons operational weight, went even one step further: “The State of Israel must serve as an example and spearhead the struggle against extreme Islam, whose messengers have slaughtered innocent people in Paris, New York, Madrid and Israel. Hamas and the Islamic State share an ideological platform that leads to attacks around the world and a wave of terrorism in this country.”

Drawing a straight line between events in Europe and those closer to home is a public disservice of the highest order. It not only constitutes a conceptual distortion, but in an effort to demonstrate that Israel and the West are in the same boat, implies that the solutions to terrorism are identical. The insistence on such parallels, however politically convenient for those in power at the moment, is highly irresponsible. It falsely assumes that contemporary acts of terrorism are prompted by the same motives, carried out by the same perpetrators, yield the same results and can be eradicated by the same means. This is false and misleading.

There are as many definitions of terrorism as there are instances of its nefarious manifestations. All seem to contain several common threads. The intent of those who carry out acts of terrorism is precisely that: to instill terror (panic) as a way of making a political statement against the existing order. Terrorism is the work primarily of clandestine groups or individuals mostly linked to non-state actors involved in asymmetrical conflicts either locally, nationally or — increasingly, transnationally (although states have been known to engage in such acts). The mark of terrorism is violence — both actual and potential. Its activities are designed to have far-reaching psychological repercussions beyond its immediate victims or targets. In the contemporary world, terrorists rely on the media to magnify and multiply their impact, thus giving their activities a theatrical quality.

Above all else, terrorism is a political tool — a tactic designed to achieve a particular goal. As a method, it is distinguished from terror (a term which denotes intense fear, intimidation, or horror) in that it is not abstract. By definition terrorism is concrete, focused, and specific. It comes in many forms and springs up from many different sources.

This is the reason that the objectives of terrorism today are so diverse. The latest attacks on the City of Lights by proponents of the Islamic State were meant to assail the physical symbols of Western culture on its own ground, while simultaneously warning French policy-makers against the continued military assault on ISIS strongholds in the Middle East. This is a far cry from the ongoing and mostly individual acts of terrorism now taking place in Israel and the West Bank — aimed primarily (official protestations aside) against years of Israeli occupation and repression — or, for that matter, from successive rounds of rocket barrages emanating from Gaza, which, under the aegis of Hamas, seek to destabilize Israel.

The perpetrators, therefore, also vary. They come from all parts of the globe and all religions. Each culture has its own peculiar brand. To be sure, the most outrageous acts of terrorism in recent years — but definitely not all — are the work of a handful of Islamic extremists. But it would be a terrible mistake to presume that they are made of the same cloth. ISIS is not Hezbollah, Al-Qaeda is not Hamas, and the Jabhat Al-Nusra in Syria is not the same as the Al-Mourabitoun, which carried out the recent carnage in Mali. Some of the most fanatical groups, conventional wisdom notwithstanding, are Sunni rather than Shi’a Muslims. This is why attempts to generalize about the characteristics of individual terrorists — their education, employment status, mental state, religious devotion — have also failed. These are tied to time and place and should be addressed on a case by case basis.

The refusal to differentiate between the particular attributes of each act of terrorism makes it even harder to deal with the complexities of the phenomenon. For years, official responses have centered on the near and the immediate: on prevention and, where possible, on retribution through the use of physical force. Increased security measures, mounted vigilance and an array of precautionary steps are at times able to contain terrorism (often at the price of constraining individual freedoms and nurturing massive panic — exactly what the terrorists want). Attacks on terrorist cells and strongholds may succeed, at least temporarily, in weakening these combatants. But if history teaches us anything in this regard, no major source of terrorism has been permanently eradicated by military means.

No end without political solutions

Eliminating the roots of specific acts of terrorism requires, above all, political solutions, just as the answer to most political problems lies in presenting viable political alternatives. Thus, those concerned with halting the reach of ISIS would do well to begin to reconstruct state structures in the region because it is the collapse of the post-colonial state system that has resulted in the political vacuum that allowed the rise of the aggressive fanatical groups. In Israel, further avoidance of political accommodation with the Palestinians will only lead to more violence. In parts of Africa, weak governments invite ongoing terrorism, as Nigerians subject to the forays of Boko Haram know all too well. And the political stabilization of Lebanon can go a long way towards minimizing the activities of the terrorist cells that breed on its hilly terrain. These are sometimes protracted and complicated processes. But they must be set in motion if anything is going to change in the long run. Since terrorism surges when conventional politics fail, the revival of viable political options is by far the best answer to the proliferation of its evils.

Israel stands to gain nothing from placing all acts of terrorism together in the same basket. Insistence on such a conflation may allow the government to place the country in the company of European states under assault, but it suggests that its own struggle against terrorism can be dealt with in the same way. Nothing could be further from the truth. ISIS is not stabbing Israelis in Hebron or Kiryat Gat; Palestinians overwhelmingly despise the Islamic State and what it represents.

No amount of political manipulation should defer what is now needed. Israel must quickly and efficiently deal with its own terrorism by coming to terms with the Palestinians and let the West to address its terrorists through its own political means. This, ultimately, is the only way to quash the terror of terrorism.