The quote found in the title of this post are the words of Dalya Lemkus (hy”d) who was savagely murdered by a knife-wielding terrorist one month ago. She made this statement after the FIRST time she was attacked by a terrorist. Yes, you read that right: she was FIRST attacked in 2006 and lived through that trauma, only to be murdered in a SECOND attack this past November.

Dalya lived after the first attempt on her life an additional eight years, during which time she matured into the woman she became on the day she was murdered. While I did not know her personally (as I wrote in a post the day she was murdered [here]), it was AS IF I knew her the moment I saw her picture. She is the young woman I passed at the Makolet. She was the young woman I sat next to on the train; the one who plastered signs all over about Bnei Akiva events; and the one who other girls just naturally flocked to.

Sadly, in many cases, after a family suffers such a tragic loss such as this, the media attention subsides; the story begins to fade and the victim is remembered by her close friends and family while others move on with their own day-to-day issues. In other cases, there are projects that are begun in the memory of the victim that perpetuate the life of that individual and bring joy to the living.

And I am happy to report that this is the case in this situation. Dalya was a woman who exuded joy and happiness and she brought that to others as well. Just look at her smile and look into her eyes.

It is that joy that she had in life that will be perpetuated after her death. The Lemkus family has created a project in Dalya’s memory. They are asking for people to partner with them and the community of Tekoa, from which Dalya came, to fund the Simchat Dalya Hall at Congregation Sukkat David.

Tekoa was the home of the prophet Amos. In the very last pasuk in Amos, the prophet tells us:  וּנְטַעְתִּים, עַל-אַדְמָתָם; וְלֹא יִנָּתְשׁוּ עוֹד, מֵעַל אַדְמָתָם אֲשֶׁר נָתַתִּי לָהֶם–אָמַר, יְהוָה אֱלֹהֶיךָ   (“And I will plant them upon their land, and they shall no more be plucked up out of their land which I have given them, saith the Lord your G-d.“)

No matter what; no matter the terror and the murder and the vitriol, Hashem promises us that we shall not be removed from our Land. In the very same place from which this prophecy was stated, I urge everyone reading this to visit the website set up for donations and to generously give to perpetuate the life and legacy of happiness that was Dalya. 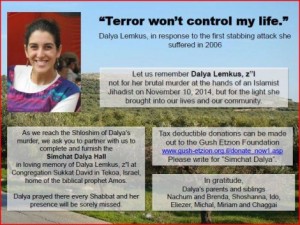