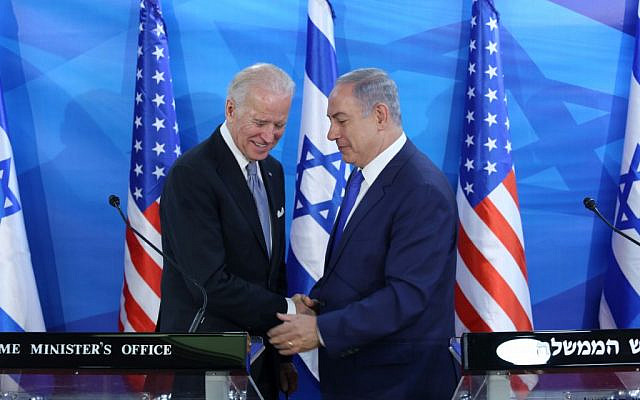 I’m a Jew who lives in Judea and Samaria; most of the world refers to me as an Israeli settler in the West Bank. There are certain assumptions made about people like me. We are supposed to be right wing, tend towards the extreme side of issues, hate Palestinians, and of course, support US President Trump’s re-election and oppose Vice President Joe Biden’s candidacy. None of these assumptions are sustainable.

I’m grateful to President Trump and my gratitude will never wane. I’ve previously written of all that he and his administration have done for Israel and the Jewish people. Many criticize his policies as purely cosmetic, but nothing could be further from the truth. Many of President Trump’s policies concretely improved Israeli’s lives. He has made Israel safer and more secure, and even more importantly, he has encouraged and helped Israeli growth. President Trump has been a true ally to the Jewish people, and he was the most supportive American President Israel has ever enjoyed.

By his own demonstration and statements, Vice President Biden is a Zionist. He loves the Jewish people and the State of Israel. He had a near unheard of perfect Pro-Israel voting record in over 30 years in the Senate. President-elect Biden aims to be a strong supporter of Israel as President, while being an effective broker between Israel and the Palestinians. As party leader, Biden effectively shut down efforts to move the Democratic party away from its supportive positions on Israel.

As an Israeli I’m optimistic about the future of the US-Israel relationship. Our Prime Minister, Benjamin Netanyahu, has worked with Joe Biden as a Senator and as Vice President. While both leaders frequently allude to their disagreements, they both talk proudly of their warm and honest friendship. Vice President Biden was often a calming and bridging voice during the tumultuous Obama years. During one of Vice President Biden’s visits to Israel, Jerusalem’s planning commission lacked the sensitivity to better time their newest building announcement and inadvertently offended the Obama administration. Vice President Biden worked tirelessly to explain that the announcement was a misunderstanding and not an intended slight. It is this fair approach that we can expect from President Biden.

Do I have concerns over a Biden presidency? Yes. President-elect Biden is a strong advocate for a return to the Iran nuclear deal. Like the overwhelming majority of Israelis and our leadership, I felt the JCPOA wasn’t effective at stopping Iran’s nuclear weapons program and didn’t address Iran’s missile development or sponsorship of global terror. As a Jewish resident of Judea and Samaria (a settler) I know that Biden is wrong that we impede peace and our growth should be hampered. I hope President Biden and his administration will refrain from unhelpful criticism of Israeli growth. I hope these concerns will be unfounded, but I am apprehensive.

There’s no contradiction in thanking President Trump and congratulating President-elect Biden. As an American I love America and know that praying for the success of the union and its President is as American as apple pie. The greatness of America is the ability to praise and criticize simultaneously and not see political opponents as enemies. I will forever be grateful to President Trump and have begun praying for President-elect Biden’s success.