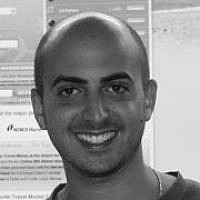 The Blogs
Daniel Abrahams
Apply for a Blog
Advertisement
Please note that the posts on The Blogs are contributed by third parties. The opinions, facts and any media content in them are presented solely by the authors, and neither The Times of Israel nor its partners assume any responsibility for them. Please contact us in case of abuse. In case of abuse,
Report this post.

It’s been an incredible two and a half months relocating the MyCurrencyTransfer HQ to Tel Aviv. Your vibrant startup community has welcomed us with open arms. We’ve tapped into your extraordinarily bright talent pool and our team has had the bonding experience of a lifetime.

Many back home in London thought we were barking mad. A member of my family asked me only days before departure, ‘‘ Why would you want to leave one of the largest financial centres in the world?’’ The answer? We wanted to experience first hand everything ‘The Startup Nation’ has to offer.

In this post, I will try to explain why our UK price comparison site, with UK visitors & predominantly UK partners took the slightly bizarre decision to trade the Silicon Roundabout in London for the Silicon Boulevard in Tel Aviv.

In a recent speech, Barack Obama said, ‘‘ if people want to see the future of the world economy, they should look at Tel Aviv, home to hundreds of Startups and research centres.’’

Tel Aviv has a vibrant, exciting & execution driven Startup community. The idea of immersing ourselves in such a thriving hub of innovation was a mouth watering prospect. Not a day goes by without some type of ‘meet up’ or event designed to bring the tech community closer together. From highly acclaimed accelerators to prestigious entrepreneurship competitions with fabulous prizes on offer, it is no surprise that proportionate to the population, Israel has the largest number of Startup companies in the world.

From digital marketing gurus to data scientists, we’ve been able to tap into the talented local talent pool. Our goal was always to come back to London & build a legacy in Israel. Thankfully, we’ve been able to recruit people on the ground and will leave having established our first international office in one of the hottest startup capitals of the world.

In my opinion, the fact that the vast majority of Israelis have been to the army & generally start their careers much later than those of other European countries makes the entrepreneurs that much more mature and goal driven. I have no doubt that Senor & Singer, authors of ‘ The Startup Nation’ are bang on the money. The responsibility that comes with military service, the network of contacts acquired and unhierarchical environment of the IDF has helped breed an array of successful Israeli entrepreneurs. We’ve listened and learned from so many ex-soldiers now in business. It has certainly made us stronger, more rounded entrepreneurs.

Israel is a country of risk takers

Successful entrepreneurs, we’re taught, are natural dreamers and take risks. They take risks to launch businesses that solve problems in the world. In our case, it’s cleaning up currency & the extortionate charges to make a foreign exchange transaction. At a base level, moving a UK based price comparison site to Israel for three months was certainly a risky move.

However, over the last two and a half months, we’ve pushed ourselves to learn first hand how the confidence to take a risk is a key part of the ‘Israeli DNA. One of the most inspirational things we have learned is the appetite & premium placed on taking a risk. The high risk, high return mentality has certainly acted as a catalyst for helping our own business to ‘think big.’

We try to build a hard working but fun company culture. Moving the team to another county and being a part of new anthropological experiences has been fascinating. We have both Christians & Jews in our team. Everyone has immersed themselves deep into Israeli culture, made new lifelong friends and benefitted greatly both personally and professionally from the experience. We’ve toured & had a blast. From sunbathing in Eilat to climbing Masada by sunrise, we’ve got to know our colleagues better and build camaraderie amongst peers.

With an average of close on 0 rainy days per year & the sun on autopilot, your climate definitely helps bring a smile to all our faces. Living in a beach city and having the ability to go for a run on the sand before work is a simple, yet exhilarating experience. Furthermore, walking to work as opposed to the smelly London Underground has proven to be a pleasure rather than our usual tiresome chore.

Only In Israel Moments

Last but not least, it wouldn’t feel right to leave you without a couple of classic #onlyinisrael moments. If I had a pound (or shekel) for every time I loudly proclaimed ‘‘ #onlyinisrael ’’ – I’d be high on the super rich list alongside Mark Zuckenberg himself. That’s right, we’re talking about those uniquely infuriating, hilarious, shocking & unbelievable moments that truly only happen in Israel.

#onlyinisrael does my taxi driver break down on the highway with a puncture & fancies a sleep so asks me (the customer) to make calls to sort the issue out.

#onlyinisrael do 2 Israeli Co-Founders approach us within 60 seconds of arriving on the first day to ask us whether we can do an English ‘usability’ test on their product. The hook was a pack of Bisli & Beer in return.

On a serious note, I firmly believe that your secret sauce is not Tahina or Hummous, but ‘Chutspah.’ Channeled in the right way, it is incredibly powerful and an attribute which forms part of a successful Israeli entrepreneur’s weaponry. Israelis are not rude. It’s strong, tenacious Chutspah!

Your tiny country lives and breathes innovation & it’s something we are privileged to be a part of. Thank you for helping us build a home in one of the most friendly, exciting & technologically influential cities in the world.

About the Author
Half Israeli, Daniel Abrahams is the Co Founder & Head of Partnerships at MyCurrencyTransfer.com & MyTravelMoney.co.uk, a comparison platform to help individuals and businesses get the best foreign currency deal.
Comments