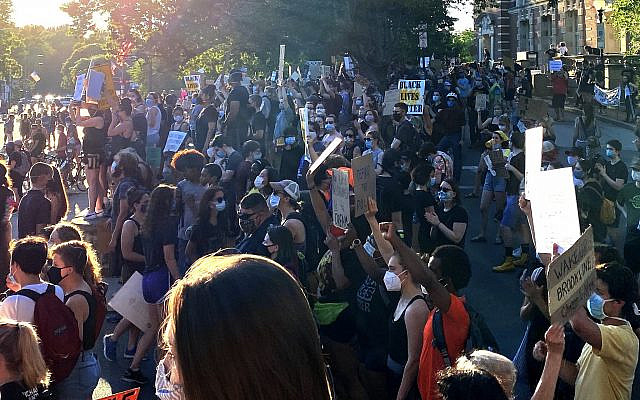 A Rally marking Juneteenth, demanding an end to white supremacy and police brutality, in front of the police station in Brookline, Massachusetts (2020 - Arnaud Amzallag)

Can they be explained by scientific and systematic patterns? Are there deeper meanings behind them? Or, are they simply what they are: just coincidences?

These are some of the questions I have been asking myself since my father recently passed away. My father’s passing occurred at the intersection of several coincidences. He passed away on the 30th day after his mother died — a significant day in our Jewish tradition of mourning.

He also passed away on a Saturday, which just so happened to be the 15th anniversary of my Bar Mitzvah portion, Beshalach. In parshat Beshalach, we come across an interesting theme about birds. We sing the Sea of Songs that the Israelites sang after safely crossing the Red Sea where the birds sang with them. It is also a tradition to feed birds on that Shabbat. Coincidentally, my father’s name was that of a bird — Shahin, which means hawk.

Were these coincidences just random or were they signs with deeper meanings?

My father and I were, in fact, asking ourselves a similar question about another apparent coincidence that occurred during the Black Lives Matters protests last summer that connected with parshat Beshalach. So to honor my father’s memory and in honor of Black History Month, I decided to reflect on this particular “coincidence” and share what my father believed it meant.

This past summer, we saw perhaps the most significant racial unrest since the Civil Rights Movement in the 1960s. Indeed, the brutal killing of George Flyod sparked some of the largest mass protests throughout the country in decades, with calls for significant reforms in response to police brutality and a changed national narrative.

When talking about the events with my dad, he said he noticed a coincidence in the timing of the rise of this racial justice movement. He pointed out how it has been about 400 years since Blacks were enslaved in America and, as we learn in the Bible, our Jewish ancestors spent over 400 years in Egypt before they were freed from slavery in parshat Beshalach:

“Then God said to Abram, ‘Know for certain that your descendants will be strangers in a land that is not theirs, where they will be enslaved and oppressed for four hundred years'”(Genesis 15:13).

My father said he believed there were a couple of deeper meanings behind this apparent “four hundred year coincidence,” as he liked to describe it. One, he believed it was a sign that a people’s true process towards liberation begins after about 400 years of oppression. One might argue that the comparison does not match because slavery was officially abolished in America back in 1865. While it is true that formal chattel slavery has not existed in America for over 150 years and there certainly has been significant progress in racial equality, the past century-and-a-half have seen new systems of control targeting Black and Brown people.

This was something I learned over the summer when I read Michelle Alexander’s The New Jim Crow: Mass Incarceration in the Age of Colorblindness. As many Americans may know, even after the abolition of slavery, there were still legalized segregation policies and voter suppression tactics targeting Black people in America known as the “Jim Crow era.” Even after the Civil Rights Movement in the 1960’s, yet another system of control came into being.

Alexander argues that mass incarceration and the War on Drugs are practically the “new Jim Crow” of today. Indeed, even though White people are just as likely to use illegal substances as Black and Brown people are, people of color have been and still are disproportionately incarcerated for non-violent drugs offences. For instance, she points out how in some states 80-90% of those incarcerated due to drug offenses are Black. Moreover, even if they spend little or no time in prison, once they are convicted they are often monitored and face restrictions in their mobility or else they may go back to prison. For example, in many states, those with non-violent drug offences, who are disproportionately Black and Brown, encounter a wide range of regulations that prevent them from accessing legal employment or social services and sometimes are not even allowed to vote.

Indeed, mass incarceration and the War on Drugs have served as the latest undercaste system for Black people and, in order for them to be truly free, this will need to change. And, as the Black Lives Matters protests were in response to specifically police brutality, this could be the beginning of the end of what will hopefully be the final system of control.

My dad also believed that “the 400 year coincidence” was a sign that American Jews should become more involved in helping end this system of control. My dad felt that American Jews had become less proactive in social and racial justice after the Civil Rights Movement, which he also believed harmed Black-Jewish relations. Thus, he suggested that this “coincidence” was a wake up call for us to rejoin the cause and help raise the voices of Black and Brown people so they can be freed from this system of control just as our ancestors were all those years ago, and that is exactly what I intend to do.

My father taught me almost everything I know in life and, now that the torch has been passed, I plan to use everything he taught me as I go about the next stage in my life and to do what is right. To honor my father’s name and his memory, I will raise his voice by raising my own and help raise the voices of Black and Brown people to promote criminal justice reform and end systematic racism — and I implore my family, friends, peers to join us.