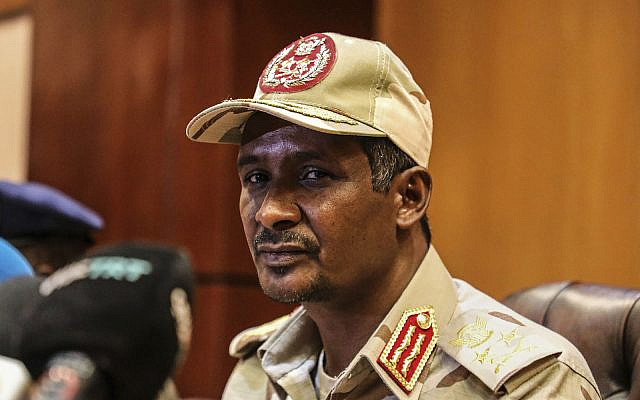 FILE - In this April 30, 2019 file photo, Sudanese Gen. Mohamed Hamdan Dagalo, the deputy head of the military council speaks at a press conference in Khartoum, Sudan. Dagalo, on Sunday, March 15, 2020, said his country would mediate a deal on an escalating dispute between Ethiopia and Egypt over Ethiopia's controversial dam on the Nile River. Tensions are rising because of the impasse between Ethiopia and Egypt over the $4.6 billion Grand Ethiopian Renaissance Dam. The project is around 71% complete and promises to provide much-needed electricity to Ethiopia’s 100 million people. (AP Photo/File)

How would our forefather Abraham feel about the accords that bear his name?

Standing in the days between the two Torah portions focusing on his life and considering them carefully, my guess is: bitter disappointment, and righteous indignation.

How dare I say that? Don’t these historic accords herald peace and prosperity, and an unprecedented Israeli recognition by the Arab world? What is there to criticize?

To understand why Abraham may have been less enthused at the “peace and prosperity” brought about by this recognition, it is worthwhile to consider his complicated relationship with Sodom.

In last week’s Torah portion, after Abraham inserts himself into a regional war to save his nephew, the king of Sodom, believing he has found a powerful new ally, extends a hand of friendship that comes with economic incentives. “Give me the people, and you can keep the property” (Genesis 14:21).

Abraham’s response? Not a single cent. As attractive as the offer may have been, Abraham is not willing to base his economic advancement on the deeply corrupt society of Sodom, because he understands that it is the very antithesis of his mission in the world. Abraham, the epitome of chesed, of lovingkindness, was chosen in order to bring blessing to all nations. Sodom’s ideology, as elaborated by rabbinic midrash carefully listening to text and subtext, was precisely the opposite. The world works best when each individual, and every nation, works in their own best interests. Chesed breeds dependency and weakness, and besides, the world doesn’t work that way.

Abraham understands that to build his own vision on the economic success of his antithesis is not only hypocritical, it is also ultimately counterproductive.

This deep ideological debate, however, does not prevent him from arguing with God on Sodom’s behalf in this week’s portion. Abraham’s view of the world is radically different than Sodom’s, but he is not indifferent to them. Indifference, after all, is Sodomite currency, while Abraham’s coin is radical responsibility.  For the father of many nations, how could it be otherwise?

What does it look like to apply the ethos of Abraham to the Abraham Accords?

It means asking the following question: are these accords a fundamentally Sodom-like exercise in self-interest on the part of both parties? Or are they truly grounded in mutual chesed, and a message of peace, prosperity, justice and righteousness for the world?

We can discern what Israel’s answer is by looking at how we react when tested as the king of Sodom tested Abraham. Are we willing to benefit from practices antithetical to our own values and commitments? Recently, the Arabic press reported on a secret Sudanese delegation that arrived in Israel to discuss “security matters.” The delegation was led by one Mohamed Hamdan Dagalo, commander of the Rapid Support Forces. Dagalo was a leader of the Janjaweed militia responsible for the perpetration of genocide in Darfur in 2004. The Rapid Support Forces were created under his leadership out of former Janjaweed fighters and continued to be responsible for mass killings of civilians and rape as recently as 2014. Dagalo is not only one of the most powerful people in Sudan, he is also one of the richest, having used the power of the RSF to allow him to become the country’s biggest gold trader.

As part of Sudan’s agreement to join the Abraham Accords, Israel will not only “benefit” from this money, it will almost certainly do so in exchange for goods, including Israeli weapons exports, and in particular, Israeli cyberweapons. The ways in which these weapons are used by other partners to these accords – against human rights activists and journalists, to crush dissent and undermine free speech and democracy — recently received worldwide coverage in the award-winning Pegasus Project investigative reportage.

What would Abraham say to all this? “Please, not in my name.”