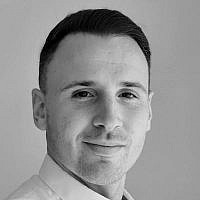 The Blogs
Jonathan Marcheria
Apply for a Blog
Please note that the posts on The Blogs are contributed by third parties. The opinions, facts and any media content in them are presented solely by the authors, and neither The Times of Israel nor its partners assume any responsibility for them. Please contact us in case of abuse. In case of abuse,
Report this post.

There is a saying in Israel, that when you enter a courtroom, you know in what state you’re going in, but you never know how you’ll leave. Neither side, in other words, can be certain of the results of the judicial process. Something similar is also happening in Israel’s political system. Over the past two years, the State of Israel has been gripped by a grave and unprecedented political crisis, in which attempts to find a solution have revealed the excess flexibility of our governing system.

When did it all begin?

After three election campaigns and with the coronavirus crisis unfolding, Benjamin Netanyahu and Benny Gantz, decided to form a rotation government i.e. a government that, during its term, will alternately be headed by two prime ministers. The new government’s declared aims were to deal with the challenges of the COVID-19 pandemic, to bring an end to the political deadlock, and to avoid a fourth consecutive election. Hence, it called itself “emergency unity government.” In order to form this government, Netanyahu and Gantz drafted a convoluted and unprecedented coalition agreement that required major legislative changes, which revealed the extraordinary flexibility of parliamentary procedures in Israel and introduced a new, innovative, and creative political vocabulary. In retrospect, it appears that the formation of this government eroded certain political norms and normalized the idea of making fundamental constitutional reforms. The new rule is that everything is kosher, and the ends justify absolutely any means.

It was decided, among other things, that the new government would be what Israelis call “Paritetic,” i.e. founded on the basis of parity and equal power between its two constituent blocs: the center-left bloc led by Blue and White, and the right-wing/religious bloc led by the Likud. This guaranteed an equal weight in government votes for the two blocs, even though Blue and White controlled far fewer seats in the Knesset and government.

Moreover, in order to facilitate this parity and enable parties to function properly in Knesset committees, it was decided to pass a law allowing ministers to resign from the Knesset while retaining their ministerial portfolios, such that parties could swear-in the next candidates on their electoral lists as members of Knesset. This is popularly known as the “Norwegian law.”

Moreover, Israeli law states that a new government must pass a budget within three months, and if it fails to do so – it collapses, the Knesset is dispersed, and new elections are triggered automatically. The coalition agreement stipulated that Benjamin Netanyahu would serve first as prime minister in rotation, and if the Knesset were dispersed, Benny Gantz would become the interim prime minister. The fine print, however, stated that this clause would not come into effect if the Knesset were dispersed owing to a failure to pass a budget. After three months without a budget, in order to give the government another chance and more time to solve its political disagreements, the “Hauser-Hendel compromise” was reached. This was a proposal by MKs Zvi Hauser and Yoaz Hendel to amend Basic Law: The Knesset and give the government a four-month extension to pass a budget. In other words, governments would have seven months to pass a budget from the day of their establishment. This extra time did not help the Netanyahu-Gantz government pass the budget, and when the deadline passed, the government fell and Israel was plunged into a fourth consecutive election.

Furthermore, in order to placate all the sides in the coalition negotiations, even more norms were trampled: new, absurd ministries were created with the sole purpose of handing out more ministerial jobs, such as the “Cyber and National Digital Matters Ministry,” the “Community Empowerment and Advancement Ministry,” and the “Water Ministry,” which did not really exist as independent ministries at all. The new government had a record-breaking fifty-two* ministers and deputy ministers (in a 120-seat parliament!). Some politicians were made “ministers in” certain ministries, in addition to the ministers responsible for the ministries themselves. Further rotation agreements were enacted for membership of the security cabinet, the judicial appointments committee, ambassadorial posts, and ministerial portfolios. The government scrapped the practice of giving the opposition a seat on the judicial appointments committee and the chairmanship of certain Knesset committees and more.

Why were these developments problematic?

In any political culture, boundary-pushing creates new norms, and when certain changes are legitimized, there is a real concern that the next elected officials will continue on the same trajectory. They may encounter problems and create all sorts of mutant or hybrid legal constructions to get around them. Band-Aids that ultimately become stuck in Israel’s governing system. Even worse, given the ease with which this is done, it is impossible to predict the next boundary to be pushed. The emerging reality is that whenever the political system reaches a dead end, someone will invent a strange quick-fix for the problem at hand, thus obviating the need to reach a consensus and find stable, long-term solutions.

For proof, just consider the recent formation of the “change government” headed by the new prime minister, Naftali Bennett, and of course his alternate prime minister, Yair Lapid. From now on, it is considered legitimate to appoint two prime ministers, and this could easily continue and become a norm. Interestingly, just as the Netanyahu-Gantz government was described as a “emergency unity government,” its replacement was also given a name. Israel seems to have invented a new practice of naming its governments, as if the formation of a new government requires a reason, an excuse, or an explanation of its purpose. The danger is that this will give public legitimacy for party leaders to build ideologically heterogeneous governments and, even worse, to amend basic laws in order to enable their formation. From now on, forming a government will no longer be a straightforward affair.

This time too, it was agreed to rotate the premiership. This time too, an extremely large number of ministers were appointed. This time too, the “Norwegian law” was used and even expanded. This time too, the membership of the judicial appointments committee is set to rotate. And the crown jewel is that the prime minister heads a party with just six seats: more precedent-setting boundary-pushing that will legitimize similar efforts in future. If you had asked political analysts just a few years ago whether these developments were feasible, you would have been told this was an unrealistic fantasy scenario. But here we are.

This is the context for the ongoing debate about legislating an “override clause” (to allow the Knesset to overrule the Supreme Court), provisions for a three-way rotation of the premiership, and a plethora of other amendments that could fundamentally transform Israel’s governing system and harm the separation of powers, a crucial principle of functioning democracies.

The public feels that politicians are able to do whatever they fancy with extreme ease. Fundamental changes are being made to our constitutional system, quickly, without any public debate, and without any in-depth examination of the consequences. In fact, the rules of the game are being changed in the middle of the game, in order to make it easier to assume power, in a way that feels like a sneaky power grab.

Immense damage has been inflicted on the Israeli public’s trust in its governing institutions and political system because of the way in which these changes were introduced and the controversial reasons for them, with the political system failing to give citizens a sense of certainty. There is a fear that our way of life will be subjected to drastic changes, imposed in a top-down manner, without any warning or much thought. What will happen if the next government suddenly decides, without any oversight, to move to a canton-based system and transform Israel into a confederation of autonomous states? To pursue a unilateral withdrawal as part of a peace process? To annex Judea and Samaria? Or even to ban the wearing of flip-flops in the summer…

It is time to reexamine the ease with which such enormous and unlimited power is given to our representatives in the Knesset. Some will say that this flexibility and freedom of maneuver are an advantage in crisis management, but this view is myopic. Looking at the bigger picture, what emerges is a trend of increasing legitimation for the subordination of Israel’s governing system to immediate political needs.

We must find solutions to stop this snowball effect, to secure much-needed stability. There is no need to reinvent the wheel: it will suffice to learn from how other countries found solutions, such as the establishment of an upper chamber to supervise and oversee the Knesset’s work, the enactment of a constitution, and more. Nobody has found the perfect system yet. Wherever we look, there will be advantages and disadvantages, but we must decide on a path and stick to it. Precisely now, with a government comprising such a diverse spectrum of parties, from left to right, we have an opportunity to make brave decisions, treat the problem at root, and rip off all the Band-Aids.

About the Author
Jonathan Marcheria is the former advisor to Israel's Minister of Science and Technology. He has a Master's degree in Government, Diplomacy and Strategy from IDC Herzliya. Jonathan was born in Italy by an Israeli mother and Italian father. They made "Aliyah" when he was 8 years old.
Related Topics
Related Posts
Comments
Advertisement