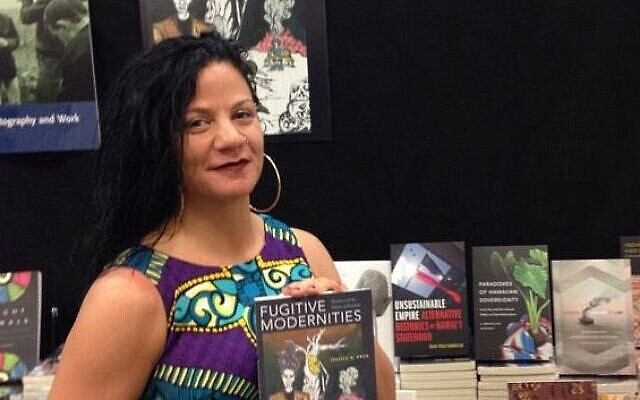 Earlier this month, Jessica Anne Krug – an associate professor of West African studies at George Washington University – revealed in a Medium blog post that she had falsely presented herself as an African-American woman throughout the duration of her tenure. Upon explaining to her audience that she is actually a “white” Jewish woman from Kansas, she announced her resignation.

Given the nature of her lies and her history of incitement against Israel, many were quick to doubt her claim to Jewishness as well. I was one of them.

Admittedly, I did not want to believe she was really Jewish at first, if only because I knew it wouldn’t bode well for the already tense relations between the diasporas of Israel and Africa. But, more selfishly, I feared that her actions would make my already Sisyphean task of decolonizing Jewish identity that much harder in the long run.

Why she did what she did isn’t clear, but I can at least offer an educated guess.

Before I do that, a disclaimer: none of what I am about to say here renders Jessica Krug’s actions acceptable or in any way justified. There is no excuse for what she did. In addition to the fact that she lied, she spread racist notions (against black people *and* Jews alike), destroyed countless reputations and, most crucially of all, stole resources and opportunities meant for black people.

My aim is not to exonerate Krug, only to bring light to a trauma dynamic that most commentators have failed to identify and which I suspect was the catalyst for Krug’s actions.

To begin, some context is necessary.

As I’ve covered extensively in countless prior articles, and despite repeated pronouncements to the contrary (predominantly by left-wing antisemites), Jews are not a white-European ethnic group. We are an ethnic group of Levantine-Middle Eastern descent and, at least inasmuch as Western Asians are broadly considered to be such, a community of color (yes, really) – a viciously oppressed and marginalized one at that.

“Ashkenazim” simply means Jews (i.e. Judeans/Levantines) whose ancestors established diasporic colonies along the Rhine River (in what is now Germany) by the end of the 1st millennium AD, pursuant to their forced dispersion from Israel. Ashkenazi means “Germany” in Hebrew, and so ‘Ashkenazi Jews’ can be understood as “the Jews who settled in Germany”. Eventually, these communities were pushed further east into Poland, Ukraine, Czechoslovakia, etc.

To define Ashkenazim as “Jews of European origin” is inaccurate and misleading. We are of Levantine origin, as are all ethnic Jews. Europe was diaspora, just as North America is today. A stop gap, if you will. Ashkenazim are a diaspora branch of a larger Middle Eastern ethnicity, similar to how Acadians are a diaspora branch of the French ethnicity.

Exile to Europe did not turn us into white/European people (or “Japheths”, as the antisemites like to say). We are and remain Middle Eastern ethnics indigenous to Israel. Despite centuries of attempts to either assimilate or exterminate us outright, we survived. We’re still here, and we’re still Jews.

Ultimately, this means Jessica Krug, and all Ashkenazi Jews, are non-white ethnic minorities of Middle Eastern descent. That remains true irrespective of the amount of people who refuse to accept it.

I don’t wish to belabor these points ad nauseam, but given the vast number of people who are still holding to the same post-modern antisemitic lies about Ashkenazim, I felt it necessary to do so again. For a more in-depth explanation of this topic, refer to these articles.

More to the point, Ashkenazim were never regarded as white at any point in history. Although many like to believe that European antisemitism was and is purely religious, it was never solely about religion. It was always ultimately about us being a degraded Oriental/Asiatic foreign presence that did not belong in Europe. Being a Middle Eastern ethnicity sandwiched on all sides by Europeans, we were singled out and systematically mass murdered for our race, Orientalized, and (eventually) targeted by America’s anti-Asian laws of the 20th century, to name a few examples.

So if this is how we were seen historically, and if we are still victimized by white supremacy today, why do so many now insist that we are white people? How can it be said that we belong to the very same power structure that excludes and ruthlessly oppresses us?

The main reason is the newfound antisemitic need to present Ashkenazim as “white”, compounded by inter-generational Jewish trauma and the accompanying desire to assimilate.

Partly in response to America’s anti-Asian laws and partly in response to the horrors of the Holocaust, our parents and grandparents labored to be seen as white – as European people who just happened to practice Judaism – because they believed it would make us safer in the long run.

And that is precisely what they did. They bleached their skin. Flattened their noses. Dyed and straightened their hair. Changed their names. Took on as many traits of a “religion” as possible. Identified their descent as “Polish”, “Russian”, “German”. And deliberately failed to educate us about Israel.

They told us our origins are in the ghettos of Eastern Europe, that Israel is nothing more than a spiritual concept – a religious story – and that our connection to the Middle East is spiritual, not historic or biological. That’s what they wanted us to believe, and that’s how they wanted us to present ourselves to the outside world.

In doing so, they’ve unwittingly given the antisemites exactly what they wanted all along and, more crucially, traded away the tools we would need to fight anti-Jewish racism in the present. So scared they were of the prospect of a second Holocaust that they failed to notice the cultural changes happening around them.

The choice they made was catastrophic, in hindsight, not only for our identity as Jews, or our right to be in Israel, or even our struggle to be heard and taken seriously as racial minorities, but for our mental health as well.

The best way I can describe this is by comparing it to an out of body experience. Belonging to a certain ethnic group means genetically inheriting all of the traumas and scars accumulated by that group. In our case, we were artificially transplanted into the bodies (or more accurately, the roles) of privileged white-Europeans – whose families have never known racism or oppression – while still retaining all of the mental scars and traumas we inherited as Jews. On top of that, we still experience racism as Jews today.

Yet we are constantly told that we are “white people of European descent” and that to identify otherwise, to identify as ourselves for what we actually are (and not what others wish us to be, according to the role others have assigned for us), is wrong – even oppressive.

What we have is, in reality, a paper whiteness: de jure, not de facto. And even the de jure is questionable given how selectively it is enforced (i.e. only when it can be used to hurt us). If anything, our “whiteness” is entirely illusory. A false label that was imposed on us to perpetuate our oppression, rob us of our identity, rob us of the tools we need to fight said oppression, silence our stories, and humiliate us by identifying us with our oppressors.

Because there is now a need among antisemites to situate Ashkenazim within the paradigm of whiteness, we find ourselves in an untenable position. We are being pressured to suppress our real identities and to claim an identity that is not ours. And this has caused considerable friction for many of us. Including, I suspect, Jessica Krug.

My suspicion is that Krug passed herself off as a black woman in order to allay feelings of confusion she may have felt as a non-white ethnic minority who, in all probability, has been forced to identify as white her entire life. Having a label that does not reflect your history, ethnicity, or lived experience forced on you is an acutely painful thing.

Imagine knowing certain things to be true about yourself only to be told by the rest of society that none of it is real. That it’s all a self-serving “hasbarah” lie. And this message is constantly and dogmatically reinforced everywhere you can think of: TV (the media eagerly and enthusiastically jumped at the opportunity to reinforce the narrative that Ashkenazim are “white” after Krug outed herself), cinema, schools, universities, among your friends, neighbors, and peers. And nobody listens to you because the meme of inherent Jewish cunning, self-interest, and untrustworthiness is so deeply entrenched.

Krug clearly wanted a way out of that. Considering she most likely didn’t know of her Levantine heritage (which has been and still is being denied to her, and us), passing herself off as black might have been the only way she could escape this hell and make sense of who she was. Or at least mitigate the dissonance.

This is why it is urgent to fight antisemitism and help Ashkenazim reclaim their real identities, and to help them feel confident and assured in who they really are.

If only to ensure that what Jessica Krug did never happens again.