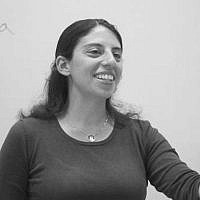 The Blogs
Lisa Biton
Apply for a Blog
Please note that the posts on The Blogs are contributed by third parties. The opinions, facts and any media content in them are presented solely by the authors, and neither The Times of Israel nor its partners assume any responsibility for them. Please contact us in case of abuse. In case of abuse,
Report this post.

As an American immigrant to Israel, married to a native-born Israeli, I often feel caught in between cultural and religious divides. Some of these I expect: my Sephardic in-laws’ opinion that women should have jobs and not careers, the flow of the year around Jewish holidays and not the American calendar, and the fact that Jewish weddings in Israel are always officiated by an Orthodox rabbi have become second nature.

But sometimes this discord of living as an American olah hits suddenly and unexpectedly.

One of my cousins is getting married in the states, and he and his fiancee chose to write their own text for the ketubah. They asked my husband and me to translate the text to Hebrew. My husband is a traditional Moroccan Jew, and the very idea of having a non-traditional ketubah is completely foreign to him. I convinced him that it would be a mitzvah to help, so we sat down to translate.

Anyone who speaks more than one language knows that properly translating texts is not as simple as entering a text into Google translate (though it can be helpful!). The cultural interpretation of words and phrases is often more important than the direct translation. So as we translated, we found ourselves struggling to create the meaning that my cousin had desired.

The first section that we struggled over talked about finding “growth as individuals” and an “elegant freedom” in marriage. Growing up in the San Francisco bay area, this idea of finding individual growth and freedom in marriage was normal, but my traditional Sephardic husband was baffled. His first question was: “Do they mean they want an open marriage?” Translating it in Hebrew made it even more complicated. A direct translation of “hofesh eleganti” makes me feel like I’m discussing an elegant vacation. We couldn’t find a poetic way to express this idea of individual elegant freedom of marriage in Hebrew.

My husband was stuck on the idea that they wanted to express their individual growth in marriage. Our traditional ketubah discusses the ways that the man will support his wife, and how they will unite their household. In our pre-marriage classes, we discussed the idea that marriage would unite us as one, physically and spiritually. We have not lost our individuality of course, but our marriage was a sign of our unity, of a new household being built.

So the very text of an ‘elegant freedom’ in marriage disturbed my husband. He did not understand how a Jewish marriage could be built on individual freedom, and not on two people becoming one.

Our second major conflict came at the end of the text, where it read: “may our devotion to the faith of Israel ennoble us.” Now my cousin is marrying a non-Jew, so I understand the hesitancy to use Judaism within the text. To me, the phrasing ‘the faith of Israel’ recalled Ben Gurion’s decision to use ‘tzur Israel,’ the rock of Israel, instead of the word G-d in the text of the declaration of Independence. My husband was less impressed, and wondered why they wouldn’t just say Judaism in the text of a ketubah, or not include it at all.

As a child of an interfaith marriage myself, I understand the difficulty of trying to incorporate traditional Jewish ideals with American and even Christian ideas. To me, the fact that my cousin, raised with very little traditional Judaism and absolutely no Hebrew, would desire any sort of ketubah, with Hebrew text because he felt a connection to it, is a sign of Jewish continuity. My Israeli husband on the other hand struggles to understand why someone would choose to express such non-traditional views in a Hebrew text that is supposed to represent a ketubah. Why not call it something else? Why bother to use a ketubah at all?

This divide is difficult to overcome. Our culture and upbringing cloud our view of the world in ways that we don’t always comprehend. For me, a ketubah that follows no traditional rules, but tries to keep a Jewish essence while representing a marriage of a non-Jew and a Jew with little day to day connection to Judaism seems normal and an attempt to connect to family history. For my husband, the same ketubah feels like too little too late for the Jewish community, and a sign of how Jewish connection is fading in the Diaspora.

Is either of us right? Or does the answer lie somewhere in between?

About the Author
Lisa Biton was born and raised in the San Francisco Bay area. She studied abroad at Ben Gurion University, where she met her husband, an Israeli from Kiryat Gat. They moved to Kiryat Gat after spending two years in California. She currently works at Alexander Muss High School in Israel.
Related Topics
Related Posts
Comments