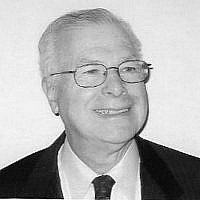 The Blogs
Michael Goldblatt
Apply for a Blog
Advertisement
Please note that the posts on The Blogs are contributed by third parties. The opinions, facts and any media content in them are presented solely by the authors, and neither The Times of Israel nor its partners assume any responsibility for them. Please contact us in case of abuse. In case of abuse,
Report this post.

As a people with a history involving many tragedies, Jews should be attuned to the role that the Big Lie has played in these tragedies as well as the Big Lie that is now being inflicted upon us. Historically, the Big Lie, alleging some fictitious Jewish evil-doing, has been the deliberate prelude to murderous assaults upon Jews.

What is the Big Lie? As defined by the Nazi Propaganda Minister, Joseph Goebbels, it is a lie so fantastic and huge that, if repeated enough, it becomes generally believed. If people find it hard to believe that anyone could have made up such a fantastic story, even absurdities will become believable.

That’s how things utterly absurd and baseless, like the libel that Jews murder gentile children before Passover so they can mix their blood into the Passover matzah, could be widely believed across the centuries.

In the Middle Ages, lies about satanic Jewish rituals, Jews poisoning wells, orchestrating the Black Death, and so on, served as the pretext for massive assaults upon Jewish communities in Europe. The populace would be fed these stories by kings, nobles or priests and would then ‘retaliate’ by attacking Jews. Jews were frequently slaughtered, robbed and expelled.

The same goes for the Protocols of the Elders of Zion. The Protocols, a document forged by the Czarist secret police late in the nineteenth century, purported to be the minutes of a secret meeting of the leaders of all the tribes of Israel at which they conspired to ruin the Christian nations, corrupt their societies and destroy their economies so that a secret cabal of Jews would rule the world.

In retrospect, no-one but the most poisonous anti-Semite today would claim that any of these preposterous allegations, which served as the pretext for murder and cruelty, were true. The exceptions today are the Arab and Muslim worlds, where the blood libels and Protocols are widely believed.

One has only to look at the Charter of Hamas, which calls in Article 7 for the global murder of Jews, which justifies its war on the Jews by explicit reference to the Protocols. In Article 32, the Hamas Charter says, “After Palestine, the Zionists aspire to expand from the Nile to the Euphrates. When they will have digested the region they overtook, they will aspire to further expansion, and so on. Their plan is embodied in the Protocols of the Elders of Zion, and their present conduct is the best proof of what we are saying.”

Today, however, there is an additional, relatively new Big Lie, which is believed far and wide and which is even the official position of most governments in the world, including even the governments of countries that are friendly to Israel — that Israel, by allowing Jews to build homes and communities in Judea/Samaria, is committing an illegal act which constitutes a war crime.

This Big Lie is based on a mendacious reading of Article 49(6) of the Fourth Geneva Convention, which prohibits “individual or mass forcible transfers, as well as deportations of protected persons from occupied territory to the territory of the occupying power or to that of any other country, occupied or not … the occupying power shall not deport or transfer parts of its own civilian population into the territory it occupies.”

The idea that Israel is violating Article 49 makes no sense. The Geneva Convention applies only to territories belonging to a sovereign power, yet Judea/Samaria are unallocated territory under international law. There has been no determination of their status by any internationally binding agreement. Nor are Palestinians being deported from Judea/Samaria to another territory. Further, Jews choose to live in Judea/Samaria — Israel is not deporting them to Judea/Samaria.

The premise of Israeli “occupation,” based on which Jewish settlement has been falsely deemed illegal or illegitimate, has been debunked by many legal scholars, including a recent legal commission headed by former Israeli Supreme Court Justice Edmond Levy. If anything, Israel has the superior title to the land. As stated by Stephen Schwebel, formerly President of the International Court of Justice, a country acting in self-defense lawfully conquers territory when that territory has been used to attack it.

Yet, despite the groundlessness of the claim of illegal settlement, the Big Lie serves as the pretext for anti-Israel voting and campaigning, including the Boycott, Divestment and Sanctions (BDS) movement, which seeks to stifle Israel economically and turn Israel and Jews who support her into pariahs.

In short, the Big Lie fosters international hatred against Jews and enables people to support Palestinian terrorist movements. It also inflames Palestinians, who think that the cause of destroying Israel is popular enough internationally to justify their continuing war on Israel.

It is therefore not a minor irritant or small detail that Israel is falsely branded a war criminal — it is part of a shameless and damaging campaign of defamation which aims, and succeeds, in whipping up hatred towards Israel and Jews. To expose and discredit this Big Lie therefore must be a Jewish priority.

About the Author
Dr. Michael Goldblatt is the national board chairman of the Zionist Organization of America. He is a clinical professor at the Philadelphia College of Osteopathic Medicine. As a charter clinical fellow of the Behavior Therapy and Research Society, he is a recognized pioneer in cognitive behavior therapy.
Comments