How much longer can the community withstand attacks from those who wish to do us harm – when we seem intent on tearing ourselves apart?

The community’s critics and opponents on the far-left, far-right, and even Islamist wing have come under pressure this week – but our front page says our community is on the path to self-destruction.

On Tuesday, we found out that the libel case brought against self-described anti-Zionist ‘ex-Jew’ Gilad Atzmon by the chair of Campaign Against Antisemitism, will go ahead after his defence was dismissed.

Then the community’s Agitator in Chief former Mayor of London, Ken Livingstone, decided to step down from the Labour party – much to the delight of everyone, apart from Jeremy Corbyn. 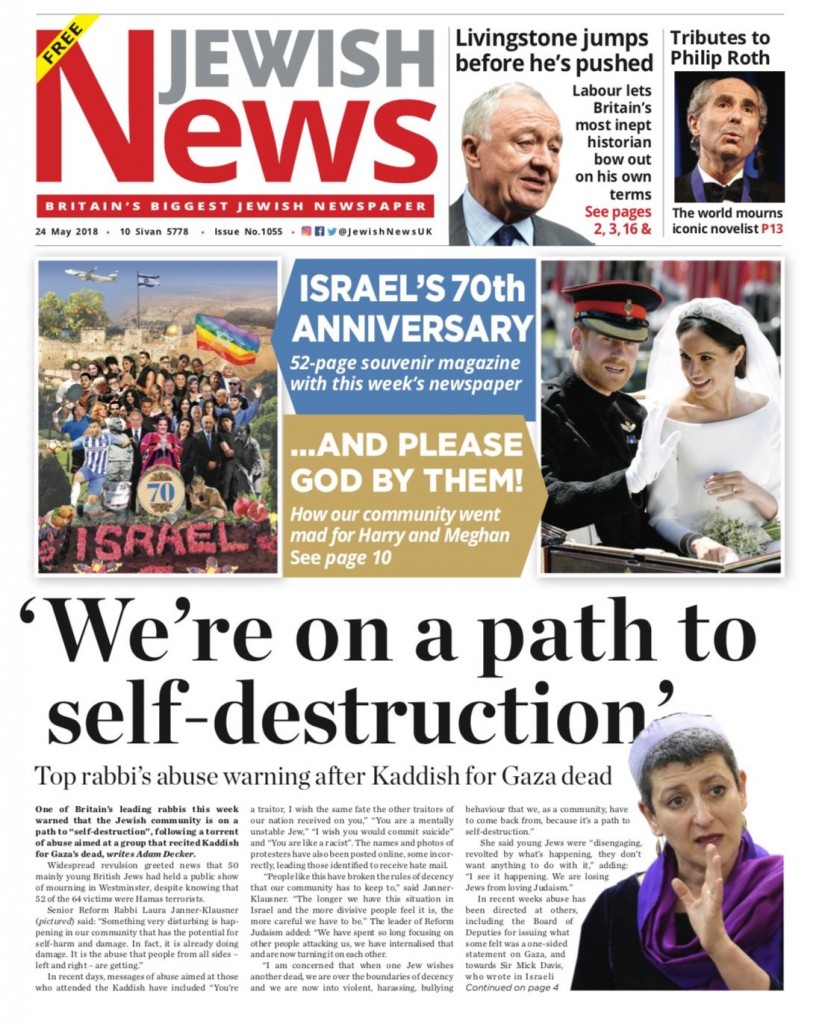 On Wednesday, Wayne Bell, who was the ‘poster boy’ for banned terror group National Action was jailed for 4 and a half years. He described Jews as ‘destructive’ and ‘vile’ and posted an image online of a man being hung with a rope, and a star of David on his forehead.

On Friday, Alison Chabloz, who penned anti-Semitic songs about Auschwitz being a ‘theme park’ was convicted on three charges.

If that wasn’t enough, ISIS supporter Husnain Rashid, who allegedly planned attacks on Jews and against Prince George, went on trial.

Just about every foe going had a taste of justice.

A week of celebration all round! Right?

The main piece of news this week – has been Jews attacking other Jews.

After young left-wing Jews gathered outside parliament to say Kaddish for those killed in Gaza- much to the anger of many in the community – there was a steady stream of abuse.

I disagreed with those who attended. But what followed was toxic. I had to actually close the comments section on columns written by attendees.

Senior Reform Rabbi Laura Janner-Klausner warned about the vitriolic backlash saying: “I am concerned that when one Jew wishes another dead, we are over the boundaries of decency”.. and that we’re on “a path to self-destruction”.

Seeing those who want to attack and destroy us face justice is taking a big step forward. Attacking each other so publicly, is taking two.. or maybe even three or four steps back.

It’s no secret our community is an opinionated  bunch – but there has to be civility in that discourse.

Disagreement has to be linked to mutual respect.

The minute that breaks down – and disagreement becomes abusive and personal – our community is effectively doing anti-Semites’ work for them.

The community is dividing ourselves up, demonising each other, and splintering off into factions.

If you don’t know how to put across an opinion without being civil, hold your tongue, because you’re doing more harm than good.