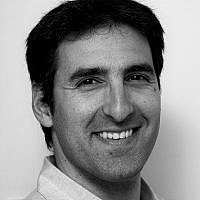 The Blogs
Josh Bacon
Apply for a Blog
Please note that the posts on The Blogs are contributed by third parties. The opinions, facts and any media content in them are presented solely by the authors, and neither The Times of Israel nor its partners assume any responsibility for them. Please contact us in case of abuse. In case of abuse,
Report this post.

Last week, Israeli authorities revealed that, once again, Hamas has been stealing international aid money intended for the general Gazan population, and using it for its own purposes. In this case, Muhammad Murtaja, the local coordinator of the Turkish Cooperation and Coordination Agency (TİKA), has been charged with siphoning millions from Turkish aid donations. He was arrested last month and accused of joining the Hamas military wing in 2008, having received military training a year later. Reportedly, Murtaja stored Hamas weapons in his own home and used his permit to travel through Israel to help the terrorist group identify targets.

As a senior employee of TIKA, Murtaja also allegedly exploited his position and diverted financial assistance and food packages worth millions to members of Hamas and their families. Murtaja’s ties to Hamas appear to include operational knowledge regarding tunnels, plans, and weapons. The director of the Turkish Humanitarian Relief Foundation (IHH), which gained notoriety for the 2010 “Gaza Flotilla” and which Israel designated a terrorist group, is also implicated in this diversion of aid.

The modus operandi of infiltrating the ranks of foreign aid groups is not new to Hamas. Mohammed El-Halabi, the manager of the NGO World Vision’s Gaza operations, is currently on trial in Israel for allegedly funneling 60% of the organization’s Gaza budget to Hamas. Halabi too is thought to have joined the Hamas military wing prior to working for the aid group, and also reportedly used travel permits in Israel to assist Hamas in planning locations for attacks. Likewise, Waheed Borsh, a United Nations Development Programme (UNDP) employee since 2003, was recently convicted for providing material assistance to Hamas and using his position to aid the terrorist group.

The similarities between Halabi’s, and Murtaja’s cases are striking. In both cases, Hamas intentionally and premeditatedly placed operatives within foreign aid groups with the express purpose of exploiting aid, benefiting its members and their families at the expense of those truly in need of assistance.

Unfortunately, the cases in Gaza are not unique. Humanitarian NGOs operate in conflict zones around the world with few controls or restrictive policies, risking the diversion of aid by armed groups. The decision by USAID in 2016 to suspend its humanitarian assistance to Syria due to this issue, as well as the multiple UN reports on commandeering of aid by terrorist organizations in Somalia, underscore this point.

In the end, the noble desires of international humanitarian groups to provide aid come at the expense and danger that terrorists will appropriate all or part of it. For too many NGOs and their government funders, the risks have not been properly weighed. Simply stated, regardless of whether not a terrorist group controls the region, and illegally and immorally paying it off is the price of doing business, NGOs will continue single-mindedly on their “humanitarian” mission.

As this clear pattern emerges, it appears that, at least regarding Gaza, government donors fail to grasp the nature of aid diversion. The Australian government’s Department of Foreign Aid and Trade (DFAT), which was the largest government donor to World Vision’s Gaza operations, has apparently completed an investigation into the alleged diversion of funds to Hamas and concluded that “there was no diversion of funds.”

Yet, it is unknown how DFAT could remotely make such a determination. Did DFAT simply review that same World Vision financial records that have allowed the NGO to self-exonerate? What ability does DFAT have, from Canberra, to determine if receipts were falsified to serve as fronts for Hamas activity, or if people receiving aid were in fact Hamas terrorists or members of their families – as alleged in the charges against Halabi?

While Australian government funds to World Vision remain frozen pending the results of the trial, there is no indication that the international community has fully internalized the lessons of the multiple instances of serious aid exploitation in Gaza.

All in all, it appears that donor governments and even aid groups operating on the ground know little as to what is really being done with the aid they provide. Gaza appears to be a “black hole,” sucking in massive amounts of aid, with little known as to what happens once it arrives on the ground. Does aid assist impoverished civilians in Gaza, or feed the corruption and thuggery of the Hamas regime?

Despite all of these known issues international aid organizations constantly campaign for fewer restrictions and try to raise funds to increase operations.

The need for more safeguards and oversight on the work of aid groups in Gaza (and in other conflict areas as well) is clear and imperative. The mere thought that funds and goods intended for aid purposes end up in the hands of terrorists should cause governments to hit the brakes and rethink what would be the best way to ensure that aid distributed actually reaches the people of Gaza. A pattern such as the one emerging in Gaza should bring about a complete overhaul of how international aid operations are conducted in the terrorist-controlled enclave.

Josh Bacon is the director of the Israel Desk at NGO Monitor, a Jerusalem-based research institute.

About the Author
Josh Bacon is the director of the Israel Desk at NGO Monitor, a Jerusalem-based research institute.
Related Topics
Related Posts
Comments