Readers will have no sympathy for protagonist Matthew Stone, who spends much of this novel whining and aching to be a mass murderer.

I have this habit of starting to read a book without looking at its back cover. Or in the case of an e-book quickly downloaded, I dive into the first chapter without bothering to check its description on Amazon. This habit may have been a mistake in the case of The Book of Stone by Jonathan Papernick (Fig Tree Books, May 2015).

The marketing text says this: “The Book of Stone examines the evolution of the terrorist mentality and the complexities of religious extremism, as well as how easily a vulnerable mind can be exploited for dark purposes.”

What that description doesn’t tell you is that the religious extremism is Jewish extremism and the blood-thirsty terrorists involved make Meir Kahane’s followers in the Jewish Defense League seem like kindergarten teachers. 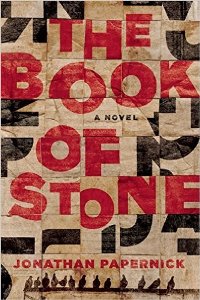 The problem with this book, however, is not its examination of terrorist mentalities but the main character of the story. Matthew Stone, son of a famous, although disgraced judge; and grandson of a Meyer Lansky-like gangster; is probably the least likeable protagonist you’ll ever meet. The younger Stone has spent his life “chasing after disastrous sexual entanglements, clutching the sinking lifeboat of hopeless relationships and cheap marijuana highs” so much that The Book of Stoned is a more appropriate title. When not smoking weed, or drinking booze, or self-mutilating himself, or nearly strangling his girlfriend, or threatening to kill his mother, Matthew treats us to a whiny obsession-filled monologue that becomes more disturbing with each repetition.

One reviewer said that the book follows “a nice Jewish boy’s slow slide into madness,” but there is nothing nice at all about Matthew Stone. At one point we do feel some sort of a connection to him. This is during a flashback to the time he spent in Israel, recovering from a mental breakdown. We actually root for the young man when he falls in love with an Israeli Arab woman, but the minute he stands her up and readily submits himself to his father’s belt whipping, we again realize that Matthew Stone has never been a “nice Jewish boy.”

At one point the author utilizes a jumpstarted word game to make us better understand the guy. “Change a couple letters in Stone, he thought, you had alone; change another, you had atone; split that word, you had at one.” But despite Matthew’s return to the Jewish fold in time to say Kaddish for his father and join High Holiday services with their “mysterious rhythms and eternal cadences”, no atonement is possible for his numerous sins.

Matthew is about to commit suicide when we first meet him; he later becomes an accessory to the murder of a friend; and by the end of the book he volunteers to commit mass murder. As readers we cannot sympathize with his struggles. We wish we could part company with Matthew Stone much sooner than the book’s conclusion. A surprise twist at the very end may be the only reason to force one’s way through the lengthy narrative.

Jonathan Papernick was born and raised in Toronto, Canada. He lived in Israel during the mid 1990s, working as a journalist in the aftermath of the assassination of Prime Minister Yitzhak Rabin. His first collection of short stories The Ascent of Eli Israel was published by Arcade Publishing in 2002 and received a full-page review in the New York Times. His second collection of short stories There is No Other was published in 2010. Papernick is currently Senior Writer-in-Residence at Emerson College in Boston.