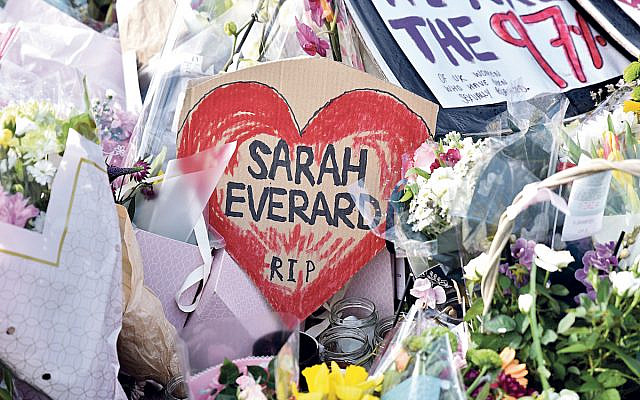 People paying their respects and laying floral tributes for Sarah Everard at the bandstand in Clapham Common, the day after the cancelled vigil. Credit: Matthew Chattle/Alamy Live News (Jewish News)

The murder of two young women recently was horrific. In offering the bereaved families our deepest sympathy, we realise that nothing but time can lessen the pain. The same is true of the youngsters knifed to death and it is not surprising that the media are asking whether women are safe on the streets and what are the police doing about knife crime.

At the same time, there is nothing to be gained by panicking.  Talk about a shortage of tanker drivers and the public creates chaos at the petrol stations. What, therefore, are the facts about women being safe on the streets? The answer is that about 200 a year get killed in the whole country and of those murders about half are domestic.

Now, absolutely agreed, one is far too many, and we grieve for the mourners, but the fact is that well over 99% of women on our streets are perfectly safe.

The subject has a long history. Mobs and riots pepper the accounts of all our monarchs, from at least Wat Tyler’s Peasants Revolt in 1381.  Move on a few centuries and you still needed an armed guard in the 18th century to get from Knightsbridge to Hyde Park Corner.

Men wore swords at the time as part of normal dress. This actually created a problem for Orthodox Jews because carrying a weapon on Shabbot is against the din. The solution the 18th century Chief Rabbi came up with was to permit swords being worn, as long as they had wooden blades. Agreed, useless in a fight, but which mugger was going to risk the blade not being steel!

Of course there were always murderers of women. Jack the Ripper killed five in the East End in 1888 and was never caught. The newspapers at the time could have been copied word for word today.

The Conservative party conference this year is in Manchester, 200 years after the cavalry charged a demonstration in St. Peters Fields and left 18 dead. It is known as Peterloo because it came soon after the battle of Waterloo. So started the agitation which led to Sir Robert Peel, when he was Home Secretary, creating the Metropolitan police in 1829, ensuring that an unarmed force would replace the army in keeping order. Hence Bobbies and Peelers. Those Victorian helmets are a reminder of yet another improvement in our way of life.

There will always be some women who are not safe on our streets because, alas, there will always be murderers. Obviously, though, you don’t have to wait for an attack. You’d have thought it must be obvious that walking on your own in a dark park at night time is taking an unnecessary risk. That wouldn’t, of course, have saved the poor girl who was murdered by a kidnapper recently, but there is no one answer to protecting women on our streets.

Blaming the government for budget cuts and the police for incompetence is just another example of depending on the nanny state. I’m sure I’m a typical father and as far as my daughter was concerned, we picked her up from parties until the day she was married in her twenties. It didn’t matter what time the party ended or where it was, she wasn’t coming home by herself if we had anything to do with it. In that way she came to no harm. Alright, it’s a nuisance. A bereaved family would settle for a nuisance if it now wasn’t too late.

Of course, this is no solution for women whose parents live in other towns or who are just single families. For them, the answer must be to go out in a crowd and come home with friends. If that isn’t possible, stay home, because even if 99% of women are safe on our streets, 100-1 shots do come in.