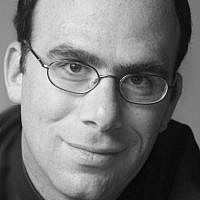 The Blogs
Joel M. Hoffman
teacher . translator . author
Apply for a Blog
Advertisement
Please note that the posts on The Blogs are contributed by third parties. The opinions, facts and any media content in them are presented solely by the authors, and neither The Times of Israel nor its partners assume any responsibility for them. Please contact us in case of abuse. In case of abuse,
Report this post.

“I’ll tell you what,” I said to the taxi driver in Haifa who was trying to cheat me. “It’s Shabbat. Whatever price you tell me — that’s what I’ll pay.”

It was Friday night, and I was on my way to services at Leo Baeck. As a graduate student at the Technion, I hadn’t yet purchased a car, so I had to rely on public transportation — busses, usually, but taxis Friday evenings and on other occasions when I wanted to treat myself.

Haifa is literally built in non-Euclidean space, and there were a variety of paths from my apartment in Neve Shaanan to Leo Baeck in the French Carmel section of the city. I got to know them all thanks to my weekly journeys. I also learned that I didn’t care which route the driver took. All of them were reasonably speedy on Friday evenings, and all of them yielded roughly the same fare of about fourteen Israeli shekels. Sometimes it was thirteen. Sometimes fifteen. Sometimes the driver would run the meter. Other times he wouldn’t bother, knowing that the fare would come to fourteen shekels.

This particular week I had seen that we were well underway and the meter wasn’t running. I had asked the driver, “You’re not using the meter?”

“Twenty-seven shekels,” the driver had told me.

“Nope,” the driver had said. “Twenty-seven. That’s the fare.”

I thought for a moment. And that’s when I said, “I’ll tell you what. It’s Shabbat. Whatever price you tell me — that’s what I’ll pay.”

We sat in silence for the remainder of the journey.

When we arrived at Leo Baeck, I looked at the driver and asked, “How much is the fare?”

He looked back at me, smiled, and said, “It’s fourteen shekels.”

I paid the fare, added a tip, and wished the driver Shabbat shalom.

I’m intrigued by the driver’s behavior. Why did he lower the fare at the end? What convinced him to change his mind? Was it my mentioning Shabbat, or just my refusal to negotiate?

The way I see it, he started the journey believing that he was entitled to take as much as he could. Taxi drivers cheat passengers. It’s just the nature of the game — how they earn a living. For all I know, he had hungry children at home and the more money he brought in the better they would eat.

By the end, he was apparently of the belief that taking anything beyond the customary fourteen shekels would be theft; and he didn’t think of himself as a thief.

But surely he must have known when the journey started that taking money by deceit was theft. He knew right from wrong. Apparently what changed is that, at first, he didn’t care. Then he did care.

I think we all fall prey to the same kind of pattern. We generally know right from wrong, but we all stray anyway, each in our own way: Theft, for some. For others, deceit. Or hurtful speech. Or bullying. Or physical violence.

And we find ways to justify our transgressions: “He wronged me first.” Or “who will know?” Or “life’s been unkind to me so I deserve it.” But we know that what we are doing is wrong, and we know it has no excuse.

I sometimes wonder how the driver feels about the bargain he struck that Shabbat evening. Does he yearn for the extra thirteen shekels (or more!) that he could have had merely for the asking? Does he look back at that journey with same fondness I do? What role did Shabbat play?

I write this just after Rosh Hashanah. And Yom Kippur, after all, is shabbat shabbaton, “the greatest Shabbat,” — a time to contemplate our own lives and behavior. So we might ask ourselves: What are we doing that we know is wrong? And is it worth it?