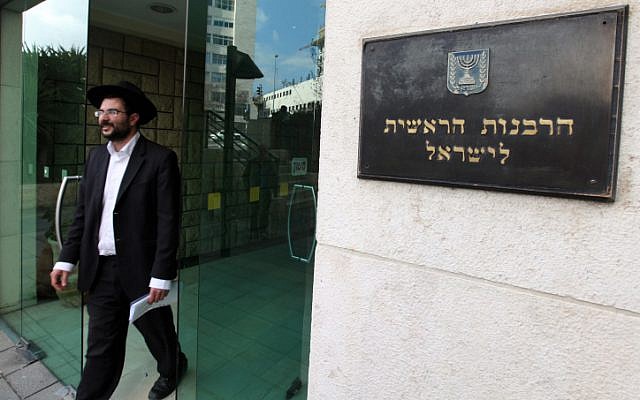 The building of the Chief Rabbinate of Israel in Jerusalem. (Flash90)

Who is an exceptionally great sage?

As the Israeli Chief Rabbinate and some of our halachic authorities seem to have taken a path that results in causing people great pain (1), thereby making Judaism repulsive in the eyes of millions of Israelis and Jews around the world, it may be worthwhile for them to take notice of a remarkable observation made by our talmudic sages.

The Talmud discusses the identity of a gavra rabbah, an exceptionally great person or Torah sage. It quotes a most remarkable observation made by the well-known sage Rava, who states:

“How foolish are some people who stand up [out of respect] for a Sefer Torah but do not stand up for a gavra rabbah” (Makkot 22b).

When asked what is so exceptionally great about these men, Rava ignores their astonishingly vast knowledge of Torah, and even their outstanding ethical and religious qualities. Instead, he notes their power and courage to change the obvious and literal meaning of a commandment as mentioned in the Torah. This is, to say the least, most remarkable!

The example that Rava gives is very telling:

While the Torah commands the Beit Din (Jewish court) to administer 40 lashes for certain offenses (Devarim 25: 2-3), the sages reduced them to 39 (2). This courage, says Rava, to change the literal meaning of the text, is what made them into extraordinarily great people. They recognized the authority vested in them to interpret the biblical text in accordance with the spirit of the Oral Torah. This authority gave them the right, even the obligation, to change the literal meaning of certain biblical texts if it became clear that a deeper reading, as well as the spirit of these texts called for such a move. In our case, they concluded that the number 40 could not to be taken literally and should therefore be reduced to 39.

For this reason, Rava maintains that these Sages should be respected even more than the actual Sefer Torah, the biblical text. After all, the text is only the frozen aspect or outer garment of the living organism, the essential Torah. It is only in the Oral Torah as explained by the Sages that the real meaning of the text becomes apparent (See The Deliberately Flawed Divine Torah).

Still, this cannot be the full meaning of Rava’s statement. If the power of the sages is revealed in their willingness to change the meaning of a text (such as in the case of the number 39 instead of 40), one should ask the following: Why didn’t Rava quote the first case ever mentioned in the Torah, concerning which the sages changed the specific biblical number to a smaller one, and use that to prove that they are great people?

It is well known that earlier, in the Book of Vayikra (23:16; Torat Kohanim ad loc. 7), the Sages changed the number 50 to 49. This was in the case of the Omer period, during which the Torah requires counting a full 50 days between the first day of Pesach and the festival of Shavuot, which would then fall on the 51st day.

After carefully studying the text, the Sages reduced the number of these days to 49 and stated that the 50th day, not the 51st, should be Shavuot.

It is remarkable that Rava didn’t bring this case to point out that their willingness and courage to reduce the number of days earned them the title of “gavra rabbah.” This is especially surprising because the Talmud always brings proof for a specific teaching from the earliest biblical source possible, never a later one. In our case, however, the proof of the sages’ courage is learned from a verse mentioned in Devarim, toward the end of the Torah! This is perplexing. Why didn’t Rava use the earlier verse, in Vayikra?

The answer is obvious. Changing the meaning of the biblical text, or reducing a number, is not enough for a sage to warrant the title of gavra rabbah. It may show great courage, but it does not reflect the essential component of an exceptionally great person and Torah sage.

One becomes a gavra rabbah when one discovers a way, by hook or by crook, to reduce the pain of fellow human beings! When a sage finds the means, through biblical interpretation, to mitigate the legal punishment of another human being, only then can we speak of a gavra rabbah, an extraordinarily great person. This is especially remarkable when the person being punished is not a righteous man but a sinner, or a criminal, who deserves lashes!

In our case of 40 lashes prescribed by the Torah when certain offenses have been committed, it is an act of mercy to find ways to reduce the offender’s sentence and administer only 39. Such initiative and courage shows absolute moral greatness.

But in the case of reducing 50 days to 49, so as to make Shavuot fall one day earlier, there is no alleviation of human pain, so neither the Talmud nor Rava characterizes the Sage in question as a gavra rabbah, however brilliant he may be (3).

The message is clear: only when making a sincere effort to reduce the pain of one’s fellow human beings can one be called a great person!

Chief rabbis, as well as other halachic authorities who do not apply this approach, are not only inadequate religious leaders, but they also become an obstacle to Judaism and should step down. Allowing them to maintain their authority is a sheer disgrace.

Dear Friends, Every week I receive hundreds of emails and important observations on my essays, via many channels. Unfortunately, the volume makes it impossible for me to respond to every comment. Please know that I deeply appreciate every comment, and learn from them all. Thank you for taking the time to share your comments. I hope you will continue to do so. — Nathan Lopes Cardozo