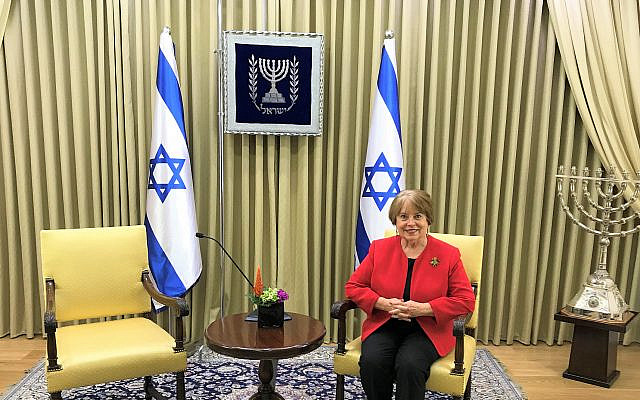 During  the last forty years, The Christian Broadcast Network (CBN) has expanded into 70 million viewers in the Middle East. Internationally, CBN reaches 166 nations in 70-plus languages. In an age of escalating antisemitism CBN ISRAEL is already well-positioned to export good news about Israel. They push back lies by spotlighting truth. CBN ISRAEL states,“Our vision is to change the global conversation about Israel and build bridges of hope and healing between Jews and Christians worldwide.”

Some years ago, CEO Gordon Robertson became alert to the mounting public defamation against Israel. “Having been to Israel so many times I said we must do what we can to change the narrative… and tell the real story of what Israel is doing.”

Robertson and CBN ISRAEL have done just that. They have heightened their daily news coverage under the leadership of Chris Mitchell in their Jerusalem Bureau. And in CBN’s Virginia Beach headquarters Robertson and his expert team work closely with their Jerusalem Bureau to produce award winning documentaries, among them “The Hope” and “In our Hands.” Some have received Emmy Award nominations.

I now have two excellent opportunities to write facts about Israel as the ancestral Jewish  homeland, their masterful innovations, security challenges, and Judaism’s profound importance to my Christian faith.  I hope readers in both the Jewish and Christian Communities will gain information and encouragement. Attending the GPO Christian Media Summit in 2018 and 2019 enhanced my education in addition to creating amazing moments like the photo above after a briefing and speech from President Rivlin at his compound to 140 Christian Media professionals from across the world.

Recently, when CBN ISRAEL asked me to write a weekly column, I eagerly accepted the chance to amplify my advocacy for the Jewish state. I’m including my first column here.

Seven thousand air miles may separate us, but the United States and Israel are adding another layer of friendship and cooperation to our already robust relationship. As our nations face the challenges of the COVID-19 pandemic, Israeli and American scientists are racing together on a research speedway to track down a cure.

While fear plagues millions during this unprecedented crisis, the U.S., Israel, and the rest of the world hope for an end to this baffling virus. We in the Christian community occasionally seesaw between fear and faith ourselves. Awaiting a vaccine, we can steady ourselves, our families, friends, and nations with prayer.

We target our prayers toward Israel in particular. We owe them a debt of profound gratitude. Jewish scribes served as vessels for the legacy of the Scriptures. Our Christian faith was built on the foundation of ancient Judaism. Our historic bond with the Jewish people and the faith of Judaism persists in modern times. This is why so many Christians in the U.S. are deeply devoted to standing with Israel and the Jewish people.

Recently, the online news magazine ISRAEL21c carried an article mentioning that some Israeli companies have research centers in both Israel and the United States. The Times of Israel reports that a U.S. firm developing a vaccine indicated that Israel could be used as a location for human trials since their COVID-19 infection rate is rising. The CEO of one of 13 Israeli companies researching a variety of cures has stated, “We believe humanity needs a toolbox of different solutions for COVID-19.” Like many Christians, I would not be surprised if Israel discovered the first cure or curb for the virus. It fits into Israel’s established reputation as the “innovation nation.”

Panic has erupted, however. Thousands of Israelis have been rioting in Tel Aviv. They have been demonstrating near Prime Minister Netanyahu’s Jerusalem residence due to their dissatisfaction with his crisis management. While scientists log untold hours in laboratories, angry voices are bouncing off the ancient and modern walls of Israel in hot debate. Last week, Netanyahu urged the demonstrators, “Don’t drag the state into anarchy, violence, and destruction of property. Don’t drag it into attacks on police; they’re doing their job.”

Peaceful demonstrators are also demanding answers. Will my children return to school? What about my business? I miss synagogue services! Tourism is gone! We need more money!

Early this week, Israel’s President Rivlin traveled north to Haifa to meet with medical, business, and civic leaders. His remarks are sobering. “The coronavirus is teaching us all a lesson in humility. … Here we are facing a tiny virus that has shut down, to one extent or another, life as we know it.” With Israeli hospitals already at 100% capacity, he added, “The doctors, nurses … and team members are on the front line. I know that even in normal times, you are overworked. … You have borne an extraordinary burden.”

Israelis’ challenges and their leaders’ comments sound all too familiar. We walk in their shoes, yet with one colossal exception—Israel not only fights the COVID-19 virus; they are also fighting a decades-long terror virus. On three of Israel’s borders—with Gaza, Lebanon, and Syria—COVID-19 has not stopped terrorists from building their vast arsenal of weapons to destroy the Jewish state. The border has been “hot” for months. A firefight broke out Sunday when Hezbollah terrorists crossed into Israel. In southern Israel, civilians are still suffering post-traumatic stress after more than a decade of terror attacks, invasion tunnels, and rockets from Hamas in Gaza.

With challenges on so many fronts, what prayers can we offer for our Israeli friends?

Here are some specific ways you can pray for Israel this week:

Together, who knows how far the United States, Israel, and the God of all nations can go!

About the Author
Pro Israel Christian Advocate Arlene Bridges Samuels has held pioneering positions for almost two decades with Israel Always, American Israel Public Affairs Committee, (AIPAC) and International Christian Embassy Jerusalem USA's project, American Christian Leaders for Israel. Traveling to Israel since 1990, she is an author at the Times of Israel and weekly columnist for The Christian Broadcast Network Israel. A speaker, consultant, and networker, her articles have appeared in Philos Project, The Institute on Religion and Democracy, Southern Jewish Life, ICEJ's Word from Jerusalem, Mercy Ships, and Concerned Women for America. She posts her devotionals, The Eclectic Evangelical, on Facebook and on her website www.ArleneBridgesSamuels.com. After attending Winthrop University in her home state of South Carolina, Arlene earned her Masters degree at the University of Alabama.
Related Topics
Related Posts
Comments