I went this past week to the Kenyon Institute in Jerusalem to attend the book launch, here advertised: 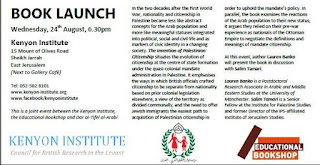 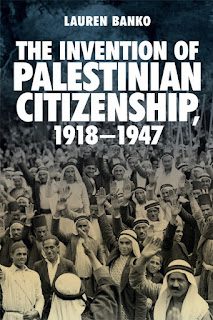 By the way, that photograph is of Abu Ghosh Arabs taking the oath of allegiance to the Arab cause to fight Jewish immigration.

A previous doctorate to eventually become was also published on the subject by Mutaz M. Qafisheh.

The author, Dr. Lauren Banko, spoke as did Salim Tamari, and I snapped this photograph: 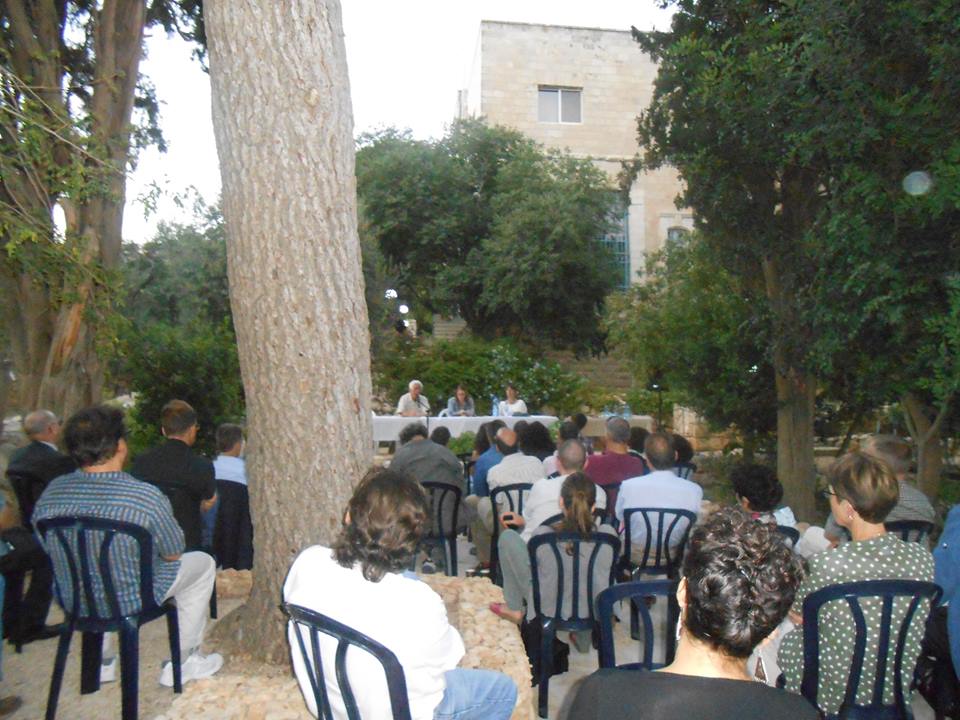 The book, as its blurb asserts,

…explores the colonial, social and political history of the creation of citizenship in mandate Palestine…situates the evolution of citizenship at the centre of state formation under the quasi-colonial mandate administration in Palestine. It emphasises the ways in which British officials crafted citizenship to be separate from nationality…the book examines the reactions of the Arab population to their new status. It argues that the Arabs relied heavily on their pre-war experience as nationals of the Ottoman Empire to negotiate the definitions and meanings of mandate citizenship.

Some of the points during the presentations I jotted down included:

a) The British actively pursued Jewish women in the 1930s, suspected by them of illegal entry or overstay and deported them and, of course, this was the fictitious ‘marriage’ arrangement by chalutzim.  I knew someone who did this three times.  And the problems that developed with the Rabbinate recognizing the divorces is another story.

What wasn’t mentioned was that as a result of the 1929 riots, the British instituted a regime of heavily restricted Jewish immigration, termed the ‘schedule’, which eventually resulted in the 1939 White Paper limitations.

As a cumulative result of those restrictions, millions of Jews were left behind in Europe and killed by Hitler. They weren’t stranded in Chile. Their right of return was denied by murder, starvation, ghettos and concentration camps not a continued diaspora existence.

b) Since Arab emigration began prior to the Mandate being instituted and mostly before World War I, starting in circa 1890, thousands of Arabs from the area of what was to become ‘Palestine’ found themselves deprived of the future Palestinian citizenship. Tamari claimed this was perhaps the original ‘right of return’ and noted that today, perhaps 30,000 returnees, third or fourth generation progeny, are illegally here in Israel, most from Chile, El Salvador and Brazil.

c) One point very much glossed over was that the whole concept of a Palestinian nationality only came about due to the Zionists.  Prior to the 1925 Citizenship Order, there was no true geo-political entity of Palestine,  It was a region, with no fixed borders and over many years divided, at various times, into very different and changing districts (and see below my eventual question of Southern Syria).  Banko did mention that it was Chaim Weizmann in 1918 who initiated discussions on citizenship but did not go into whether that idea was shared by local Arabs at the time (I have not read her book) until outsiders, and by that I mean Christians, introduced it into local politics.

d) The whole eventual citizenship construct with all its regulations was more based on Britain’s previous colonial experience and was directed by religion and community paradigms rather than what we now know as nationality.  Indeed, it was recalled that the 1947 Partition recommendation called into being an Arab and a Jewish state.

e) I learned that many Jews, required by those regulations (it was not clear to me at a specific time or throughout the Mandate period) to pledge allegiance to the Mandate Government, refused to do so.

f) The actual use of the passport was basically for protection while traveling abroad as there were no elections or such in the Mandate except intra-communal ones, the Arabs having lost an opportunity to truly become the dominate section of the population by refusing the proposal of the Legislative Council in 1924.

I did not ask a question but did send one afterwards:

You write of a “Palestinian national movement” but at that time and well into the 1930s and more, the Arabs of Mandate Palestine sought to have the Mandate dissolved and instead, recognize their nationality status as Southern Syrians and to unite what they referred to as Palestine with Greater Syria.  Even diaspora Arabs from the territory, as in the US, viewed themselves as such. (see my previous posts here, here and here)

Irregardless of what “Palestine”, as a geopolitical was/is, how do you see that impacting on the question of citizenship?

Dr. Banko kindly gave me permission to quote from her response which included this:

…the question definitely is one that needs asking and one which I, and others, have given thought to before.

It’s true that in writings and discussions in print and letters and in nationalist clubs and organisations and political parties of Palestinian Arabs into the 1930s there was a very real wish and effort for unity with Syria and a shared nationality status with the Syrian Arabs.  However, in my opinion and from research on this and related historical themes, I would argue that the best way to even begin to approach how these Arabs saw themselves is by understanding that identity then (and now) for the Arabs (and Jewish immigrants, and non-Arabs in Palestine, too) was very flexible.

There were several layers to identity, and so it’s impossible to generalise too much or even to pinpoint when particular nationalists realised that a common nationality and overthrowing the mandate was no longer attainable.  I think that although the nationalist movement posited itself even into the 1930s as pro-unity with Syria, individuals inside and outside the movement saw themselves alternately as Palestinian, Syrian Arab, etc.  Even into the 1920s there was still an identification with an Ottoman identity among some.

… I think identity was flexible and layered in Palestine for the Arabs and for the Jewish immigrants during the Mandate.  During the 1930s, even though some ideas of a pan-Arab state were put forth to the British, this had a lot to do with anti-colonialism and a wider anti-Mandate movement and anti-colonial movement in the Middle East, India, North Africa.  However, many Arabs in Palestine also believed that their situation was unique, and thus felt that the only way to end the Mandate was to emphasise a specifically-Palestinian territorial identity and struggle, just as in Syria there was a very strong pro-Syrian movement that emphasised a Syrian end to the French Mandate.

I do not think citizenship was invented.

It was created, fashioned and conceived, at least on the Jewish side, which over many centuries, viewed themselves as belonging to a very specific country, whose boundaries are delineated in Biblical and Talmudic texts scores of centuries earlier.  And these texts were not some ancient dead letter but they were studied, at least weekly, all throughout the Diaspora existence and Jews were very much aware of this element of what we call ‘identity’.

The international legal process — via the Balfour Declaration, the Versailles Peace Conference deliberations, the San Remo Conference decisions and those of the League of Nations between 1917-1922,  – all declined, studiously, to mention Arabs in the context of the country called Palestine. They were included in a group called “non-Jews”.

This was very unfortunate for the local Arabs. In one sense, however, the did gain one benefit.  The residency requirement for Mandate Palestinian citizenship was two years for most of the time.  Perhaps parallel, the residency requirement of UNRWA for refugee status was two years as well.  So all those Arabs who came to the Mandate to work and make money, especially during World War II, and then fled, or returned to their lands of origin (I have no real stats at hand although work has been done), gained not only the title of ‘refugee’ but, in the cases they did return to home villages in Lebanon, Syria, Egypt, Iraq or Jordan, they obtained the right to receive UNRWA handouts.  But that is more an economic matter.

I hope to read the book.