In less than a week, on the Ninth of Av, Jews around the world will gather to mourn the destruction of the Temple in ancient Jerusalem. Rabbis and teachers will tell us that it was caused by sinat chinam (baseless hatred) and that only by practicing ahavat chinam (baseless love) can we rebuild it.

But baseless hatred is not merely a thing of the past. It is very much alive and kicking in the streets of modern Jerusalem. And the war on hate isn’t merely a spiritual exercise. You can see it in the flesh if you visit Kikar Tzion (Zion Square), in Jerusalem’s city center, on Thursday and Saturday nights.

Kikar Tzion is normally known for its vibrant nightlife. It draws tourists and street performers, local youth and oversees students. But starting last summer, and especially in recent weeks, it became a central arena in the war against coexistence.

Dozens of teenage boys in black and yellow walk around the square in small groups harassing Arab passersby. At some point in the evening they come together and march en masse up Ben Yehuda Street, chanting “the daughters of Israel are for the nation of Israel, Arab, beware, my sister isn’t hefker (available or unprotected)”. They occasionally break out into a chorus of “Kahane was right.” Most passersby are too scared to say anything, unwilling to anger the marching, chanting crowd. 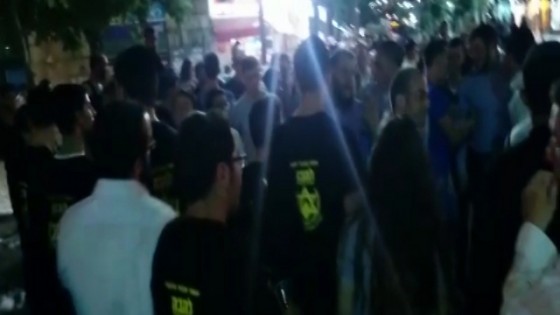 These teenagers volunteer at Lehava, which bills itself as “the organization for the prevention of assimilation in the Holy Land.” Officially the organization works against romantic relationships between Jews and Arabs. But when I asked the volunteers what they stand for, they repeatedly claimed a hatred of all Arabs. All Arabs are our enemies, they explained, and we must inspire fear to keep them in line.

Since last summer, Lehava volunteers have labored to do exactly that. They started harassing Arab passersby in the streets. They demonstrated near businesses that employ Arab workers, like Rami Levi, the popular supermarket chain. They planned a protest (that was later canceled by the police) when the Arab-Israeli journalist Lucy Aharish lit a torch at the central Independence Day event. They have been handing out flyers in central locations, and threatening citizens who stand up to them. In short, they are doing their best to sabotage the delicate coexistence between Israel’s Jewish and Arab citizens. 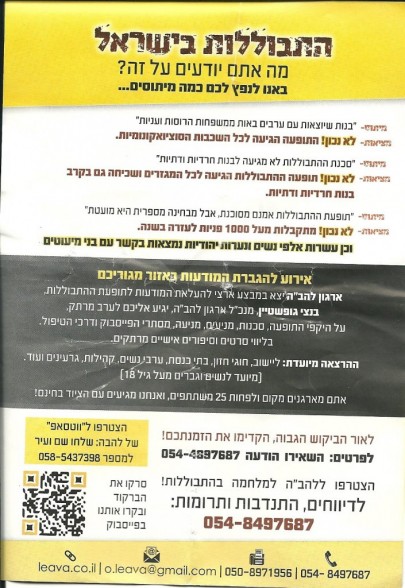 A year ago, a group of Jerusalem-based activists decided that they can’t let Lehava’s message go unchallenged. “I attended the funeral of the three kidnapped boys,” shares Ofek Birnholtz, a social activist. “It was a moving demonstration of unity, shared mourning, and shared comfort.”

When Ofek came home from the funeral, he walked straight into a lynch mob that was busy chasing and beating an Arab youth. That night an Arab boy, Muhammad Abu Khdeir, was murdered by Jews. “I realized that while the caring public gathered to mourn, we have forsaken the center of town, leaving it to gangs that focus on revenge, hatred, and violence.”

Ofek and other like-minded individuals decided to reclaim the public space. But how do you fight against hatred? The group, which later adopted the name “Medabrim Bakikar” (talking in the square), maintains that counter demonstrations are not the answer. Instead of yelling a different set of slogans, the members of the group decided to offer an alternative to Lehava’s discourse of hate.

They gather at the Square on Thursday and Saturday nights, talk with people, and invite passersby to engage in organized public debates. “We make sure that both opinions are represented in every debate,” says Giora Katz, who joined the group shortly after last summer.

“The idea is to actively demonstrate the possibility of holding a different kind of political dialog, and thus show the futility of the divisive discourse that groups like Lehava try to promulgate.”

But Medabrim Bakikar goes beyond offering an alternative: Its members engage with Lehava’s volunteers directly. “These boys are not the enemy,” explains Giora. While the senior activists of Lehava are usually well established ideologues, the teenagers whom they incite and bring to the square come mostly from disadvantaged backgrounds. “One of the main objectives of our activity,” he adds, “is to expose these teenagers to other ideas.”

Giora and his comrades challenge Lehava’s simplistic, black-and-white world views. Instead of lashing back when Lehava volunteers insult them, they listen to them and ask honest questions. When some teenagers called Giora a traitor, for example, he asked them what makes him one. His unexpected response gave them pause. Similarly, when others said that all Arabs should be exiled from Israel, he asked them how they envision such an operation. Giora hopes that by highlighting what’s actually involved in their vision, he might convince his interlocutors that reality is far more complex.

The very fact that Medabrim Bakikar brings together activists from different political camps helps to shatter simplistic stereotypes. “It’s hardest for the Lehava kids to deal with people like me,” laughs Yovel Zim, who grew up in the settlement Tekoa and votes for the rightwing religious Jewish Home Party.

“Last summer I had a long beard and a huge kipa. I looked just like their type. And that breaks stereotypes, shows them that its not about what you look like, it’s about how you treat other people, regardless of whether they are Jews or Arabs. It’s not a question of left and right, it’s a question of how you see people, how — notwithstanding all my opinions — I treat the Arab from a neighboring village or my Arab coworker as human beings.”

But can respectful conversations truly erode hatred? “We need to redefine effectiveness,” answers Hallel Fischer, one of the founders of the group. “I didn’t engage in conversations that made someone think differently about Arabs or the conflict, but months later there were kids from Lehava who recognized me and walked over to say hi. Which means I was effective in creating trust.”

Giora agrees. He believes that when one listens to the Lehava kids, despite their insults, the communication has lasting effects. “A month ago one of these kids told me about a time when rocks were thrown at him, and we had a good conversation. Two weeks later I met him with his friends. One of them started cursing me but the kid told him to stop, because I am ‘OK.’”

After their parade, I got a chance to talk to some of the Lehava volunteers themselves. While deeply frightening and disturbing as a group, these teenagers didn’t strike me as malicious individuals. Their hatred emerged from real pain – the pain of seeing other Jews hurt, terrorized and murdered. I found them heartbreakingly earnest in their desire to create what they perceive as a better reality, and willing, even eager, to discuss meaningful issues.

As I talked to these kids and watched Ofek, Hallel, Giora, Yovel and other Medabrim Bakikar activists engaging with them, I understood Tisha B’Av in a whole new light. Growing up, I was always taught that the destruction of Jerusalem was caused by sinat chinam, baseless hatred. But hatred, even when it’s indiscriminate, isn’t really baseless. It is rather a product of real experiences and emotions.

Medabrim Bakikar targets these emotions directly. Instead of merely arguing with opinions, Ofek, Hallel and their friends diffuse the vitriol behind the opinions. By listening respectfully, validating these teenagers’ pain, and creating trust, Medabrim Bakikar’s activists affect their interlocutors from within. The Lehava kids may state that they hate leftists. But they no longer hate the leftwing person they came to know and trust. And maybe, just maybe, their ability to hate indiscriminately is diminished.

On the Ninth of Av, many Jews will pray for the rebuilding of Jerusalem, our national “home,” through ahavat chinam, baseless love. I feel that Medabrim Bakiar is doing exactly that. As Yovel told me, “this is my home. I want to make it a better place.”