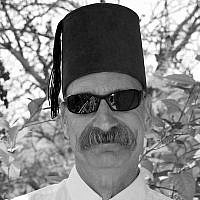 The Blogs
Rafi Lewin
Apply for a Blog
Advertisement
Please note that the posts on The Blogs are contributed by third parties. The opinions, facts and any media content in them are presented solely by the authors, and neither The Times of Israel nor its partners assume any responsibility for them. Please contact us in case of abuse. In case of abuse,
Report this post. 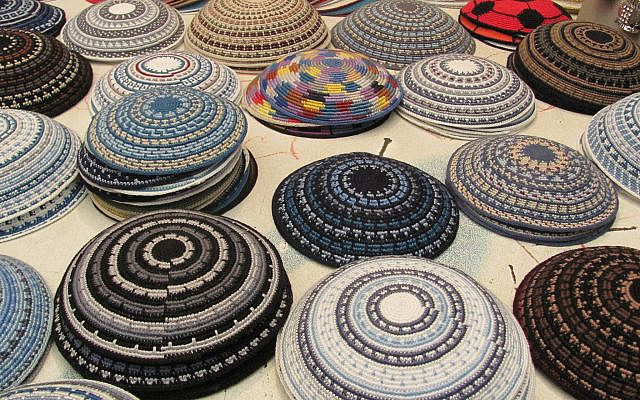 Don’t get me wrong, guys – I like the man. I even voted for him. But since he has projected himself into the public realm, I don’t feel that I’m wronging him in any way by mentioning him, and when I write here of his head attire – everyone knows what I’m talking about.

So- what gives? Our PM wears/sports/dons a miniscule disk of fabric on his lockless head, locally known as a ‘kipa’, (which means ‘dome’ in English). This piece of apparel is also known by the Yiddish ‘Yarmulke’ probably derived from the Turkish ‘Yagmurluk’ – ‘rainwear’), or if worn by the Pope – a ‘Zucchetto’, since it resembles the half of a little pumpkin… I think it is obvious already to most readers that the following will apply to the part of Jewish society that is termed ‘modern orthodox’, though as the above fragment of cloth has been shrinking continuously over the past half century or so (somewhat like the Ozone hole, but in reverse), on our male heads, the word ‘orthodox’ could hardly be applicable…

Though most people think that the kipa was worn by all Jews in history, from Abraham onwards, covering one’s head as a sign of humility before God is only mentioned in passing in the ‘Kiddushin’ Tractate of the Talmud, written about 2000 years ago. Quote: “Rav Huna, son of Rav Yehoshua, would not walk 4 cubits (about 2 meters – R.L) with an uncovered head. He said: ‘The Devine Presence is above my head (and I must act respectfully).’”

Maimonides (also referred to by the acronym Rambam), was a medieval Sephardic Jewish philosopher, whose work still carries a tremendous canonical authority as a codification of Halacha.

In the 12th century he writes that “one should not stand in prayer wearing a money belt, nor bareheaded, nor barefoot…”, which gives the impression that it was common to be bareheaded when not in prayer.
Around 400 years later, Rabbi Joseph Caro, writing his opus the ‘Shulhan-Arukh’, which is the definitive base of Halacha for religious Jewry worldwide today – would say, basing his opinion on the ‘Kiddushin’ Tractate mentioned earlier, that – “one should not walk a distance of 4 cubits with an uncovered head (out of respect for the Divine Presence)”.

600 years ago, covering one’s head was plain – if you were Jewish, you followed Halacha and wore a hat. But nowadays things are not so simple. The emancipation of the main part of world Jewry over a century ago and as a result – the option to break out from the restraints of the Kehilla (the close-knit community that you lived in from cradle to grave) – gave Jews the power to define their own religious identity for themselves. For those who felt that their Jewishness being defined only by Halacha was too stifling, the taboo over walking more than 2 meters without a hat could be disregarded. But there was another aspect in play – the social one.

The late Rabbi Adin Steinsaltz, who was a Chasidic scholar, teacher and philosopher, (renowned worldwide for his publishing of the entire Talmud in modern Hebrew, together with a running commentary) – wrote the following: ‘How and when a Jew covers his or her head is a spiritual declaration and a nuanced social statement’.

Rabbi Steinsaltz hit the nail right on the head- ‘a nuanced social statement’. And because religious Jewry had stopped being binary as soon as people moved away from the reclusive Shtetls and far-flung communities into a place where they could define their own personal Jewish identity – some were now asking themselves new questions: “Shall I continue to don a big kipa which covers my entire head – or can I rebel a little and manage with a smaller one?” “The guys at school have stopped wearing one – maybe I’ll just hang mine at the back of my head, so it can’t be so obvious, but not remove it altogether so Dad won’t yell at me…” “I don’t want to look like a Haredi guy, or that neighbour who spouts scripture at us all the time, but on the other hand – if I’m sending my kids to a religious school- I don’t want to embarrass him at Parents’ Day. I’ll do with a smaller kipa….” “I don’t want my neighbours to think that I’m a boring ultra-religious fuddy-duddy”, etc., etc… New questions indeed, but the real question which wasn’t being asked among the above social groups (admittedly slightly stereotypical), was this: “A kipa on my head depicts Jewishness. Why am I trying to hide it?”

A discerning eye can spot a thousand and one nuances in one glimpse of a kipa sported (!) by a Jew. The horrible cardboard thing handed out at the Kotel, or the shiny satin job at a funeral (“I never wear these things, but just out of respect…”), the huge woolen white item with Na-Na-Na embroidered around it (“just back from a trek in Bolivia – Rabbi Nachman says that we should all live with happiness in our hearts – that’s awesome, man!”), the cute little doily perched oh so cool at the front of the head – (see ‘Srugim’- an Israeli TV drama)… and – yep, we’ve finally got to it – the ‘Bennett’ look, or rather, since I’m talking about the apparel and not the person – the ‘Button’ (“I’m Jewish, and proud of it, but no one should think that I don’t know how the world goes around, and besides, it doesn’t look great in the photo op, so I’ll borrow my kid’s kipa and stick it on at the back”). And so on and so forth….

The ubiquitous Button… what can I say? It is a travesty. I work at a scientific institute where most of the staff are pretty intelligent, but one or two will sport a tiny 5 cm. diameter disk (which for my Imperial readers is just under 2 inches!) perched perilously on their pate – without any sort of introspection about what the hell it’s doing there…

Introspection in Judaism? Hmmm. Why do people link that word with only one day of the year – Yom Kippur? What about the other 364 days, after all the ‘Avinu Malkenu’ confessionals have been said, the breast has been thumped vigorously, and the ‘white-shrouded fasting angels’ in synagogues around the world have transformed themselves back into every-day Jews…

My take on the whole wretched thing is this: Dignity and respect. Do me a favour – If you bear a Button, give yourself a little dignity by not succumbing to the whispering and pointing of your neighbours and friends, and take the damn thing off. Somewhere along the way to our personal Jewish identity, we’ve got a little confused as to the ‘Tafel’ and the ‘Ikar’ – the subordinate and the principle. And placing a Button on your head (God knows how it even stays on) isn’t a principle. It’s a ‘nuanced social statement’, or rather (in Mama-loshen), a ‘shanda’. I personally know plenty of bare-headed men, who could fit easily into the kabbalistic list of the ‘36 righteous Jews, whose role in life is to justify the purpose of humankind in the eyes of God’. While on the other hand, the hypocrites wearing huge head coverings that we see every day being charged in court, in public life or just making the world a darker place- are legion…

Give respect that over the last 2 millennia, despite the humiliations, the disdain and hatred heaped upon us throughout history, Jews have, on the most part, covered their heads with humility before Heaven, and out of an ideology, the aim of which is to limit man’s puffed-up ego and self-aggrandizement. If you really want to wear a kipa – don’t try to hide it. Wear it with pride – it’s a badge of honour.

About the Author
Rafi Lewin works in a Nuclear pharmacy and has milked cows, painted trails for the Society for the Protection of Nature in Israel, and is a professional Tour Guide. He has been living in Israel since 1969.
Related Topics
Related Posts
Comments