I have had a Facebook account for quite some time but only used it sporadically. Over the last six months to a year, my engagement with Facebook has grown; I not only used it to keep up with family and friends, but I have also been working to build a Facebook presence for both my synagogue and for my technology blog. My week in Israel at the beginning of July saw a huge uptick in my use of Facebook, which has continued to grow. While in Israel, I had the opportunity to spend that week with 19 rabbinic colleagues on AIPAC’s first ever Rabbinic Mission. As I’ve written previously, the first day we arrived in Jerusalem we encountered a Red Alert as missiles were fired at Jerusalem for the first time. Two days later, we were in the Foreign Ministry when there was another Red Alert. We stepped outside to find that Iron Dome had intercepted two missiles headed our way. It was an incredibly powerful experience and something I wanted to share with my community. Facebook let me do so.

Since returning to the US, I have been on Facebook more than ever — not only to keep in touch with the colleagues who became friends as we traveled through Israel, but also to share relevant articles as the conflict in Gaza has continued. Today, however, I have some very real questions and concerns with regard to Facebook and its policies. Today it has, for me, gone from being a useful tool to being a necessary evil that I wish I could avoid.

Earlier in the day one of my colleagues, Rabbi Menachem Creditor, shared a link to a particular Facebook page, reporting that an associate of his had found and shared a troubling page from Facebook entitled, “Death to Israel and the Zionists.” More troubling was the fact that this individual had apparently reported the page to Facebook as one that violated their community standards for hate speech and symbols. The response from Facebook, according to this individual, was that the page did not, in fact, violate Facebook standards and would be allowed to continue its presence on the social media platform. 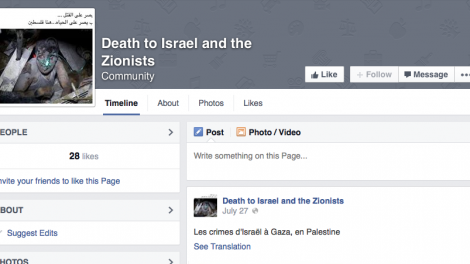 Not one to accept things thirdhand. Despite my revulsion, I navigated to the page. It is indeed entitled ‘Death to Israel and the Zionists’. As a proud Zionist I personally take offense, but that’s beside the point. I set about to report the page to Facebook as containing “offensive language and hate speech”. After submitting my report, I shared the link with a number of friends and asked them to do the same. I wanted to see if Facebook responded to us the way they had earlier in the day. Sadly this was the response each of us received. 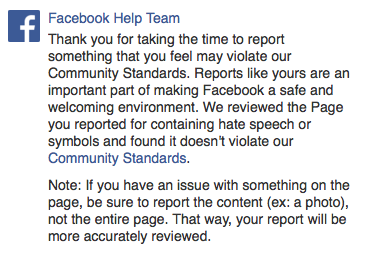 “Thank you for taking the time to report something that you feel may violate our Community Standards. Reports like yours are an important part of making Facebook a safe and welcoming environment. We reviewed the Page you reported for containing hate speech or symbols and found it doesn’t violate ourCommunity Standards.
Note: If you have an issue with something on the page, be sure to report the content (ex: a photo), not the entire page. That way, your report will be more accurately reviewed.”

Now I realize that emotions are running high these days. I recognize and I mourn the toll that this conflict is taking on BOTH sides. Any human being would be brokenhearted to see the death and destruction in Gaza. At the same time, there is no question that Hamas — with their missiles and terror tunnels — poses a significant threat to Israeli civilians. We can argue over whether Israel did enough to move toward peace over the past few years, we can argue over whether Israel is doing all it can to spare civilian lives, and we can argue over whether Hamas poses a “real and present danger”- although I think the answer to that is clear. There is a great deal to be debated in both directions and that debate should happen!

But when somebody posts a page entitled “Death to…” Whether the page is entitled Death to Israel and Zionists or Death to Gaza and Hamas it crosses the line. It is not a page looking to have a discussion. It is not a page looking to solve issues. It is not a page that is concerned about the loss on both sides. It isn’t even a page arguing a firmly held position. No, when somebody creates a page with a title such as that, it is simply a hateful attempt to tap into the most base instincts that far too many have and to stir up those emotions. Sadly, the world knows only too well what happens when there are instigators whose message of hate arrives at the doorstep of those who are fanatical or unstable. That is the real threat of hate speech, and that is why this page crosses the line.

The fact that Facebook not once or twice, but consistently with each of us who have reported this page to them, has responded by saying that this page does not violate their standards is at best troubling. It makes clear that while Facebook may be in the business of connecting people and businesses, it is doing so with no standards.