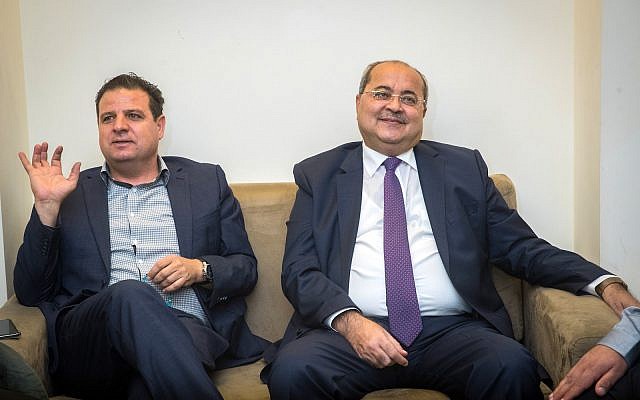 Leader of the Joint list Ayman Odeh (L) and party member Ahmad Tibi meet at the Knesset on September 22, 2019, ahead of their meeting with the President where they will give their recommendation for who will be given the mandate to build the next coalition following the elections. (Yonatan Sindel/Flash90)

The Jewish state got its first Arab minister more than a century ago, nearly 50 years before Israel even came into being. It was back in 1902, with the publication of Theodor Herzl’s Altneuland, the utopian novel describing in glorious detail the exemplary society that Zionism’s founding father envisaged coming into being in an imaginary 1923. Since then, many of us have been running with reality, manuscript in hand, trying to catch up to the dream. Last Tuesday’s election may have propelled us a step closer to that.

Reschid Bey is the reason why. An Arab character in this work of fiction, he was also a leading figure in the government of the New Society Herzl envisioned. An incredulous outsider visiting the country asks him how this could be. “You’re queer fellows, you Muslims. Don’t you regard these Jews as intruders?” he asks.

While the response exposes the author’s naiveté and his failure to foresee the development of the national aspirations of the indigenous population of Palestine, it also reveals his ideal of a state as tolerant, inclusive and democratic as it would be Jewish.

“‘You speak strangely, Christian,’ responded the friendly Reschid. ‘Would you call a man a robber who takes nothing from you, but brings you something instead? The Jews have enriched us. Why should we be angry with them? They dwell among us like brothers. Why should we not love them?'”

As noted, naïve. We’re a long way away from any Arab leader making such a statement; but, if I may so venture, we’re also a long way from deserving it. It borders on the unbelievable, given what we’ve just been through, but a critical sub-plot in Herzl’s novel is a particularly bitter election campaign pitting a racist and reactionary rabbi, Dr. Geyer (German for vulture), who would deny non-Jews the right to vote against a liberal, inclusive establishment horrified by the very thought of such exclusion. “He wants to bring intolerance into our country,“ exclaims one of Geyer’s outraged opponents. “I am certainly a peaceful person, but I could cheerfully murder an intolerant fellow like that!”

This is not to suggest that Herzl was against religion. Quite the contrary. One of the most forward thinking and respected personalities in the book is the venerable Rabbi Shmuel, whom the writer keeps busy enjoining his followers to ensure that “the stranger will feel comfortable among you” while warning them that “all that you have cultivated will be worthless and your fields will again be barren, unless you also cultivate freedom of thought and expression, generosity of spirit, and love for humanity.”  Herzl simply held that a healthy thread of universalism was basic to the fabric of Judaism.

Obviously in our visionary’s book the bigots were defeated. Over the last several months, it has been less than obvious what would happen here. It still isn’t clear. Dire warnings about the deleterious impact of the Arab vote on the outcome of the elections were a constant refrain throughout the campaign. And noncommittal overtures tendered by candidates on the Joint List of Arab parties suggesting possible and unprecedented cooperation in bringing about the formation of a government coalition were roundly rejected by many, including those who would ostensibly benefit the most in such a scenario.

The reaction, of course, is understandable. The Joint List’s platform is anathema to the majority of Jewish Israelis, calling as it does for the establishment of an independent Palestinian state with Jerusalem as its capital, the freeing of all “political prisoners” (presumably including terrorists convicted of cold-blooded murder), and a “just solution” to the predicament of Palestinian refugees that would allow them to return to territories squarely within even the essentially uncontested borders of the State of Israel, posing a demographic threat to Israel’s Jewish majority.

But this platform, and the unexpectedly high number of 13 members of Knesset who were just elected to uphold it, also constitutes a supreme challenge to Israel’s self-definition as a democracy.  Being one doesn’t mean accepting the validity only of voices similar to your own; it means acknowledging the legitimacy of those who oppose you, even when that opposition is vehement. When Arabs streaming to the polls is perceived as exclusively a danger rather than as an opportunity, questions need to be asked about our commitment to the fundamental values on which this country was established, explicitly enunciated in Israel’s declaration of independence.

Those who hold by these values – among them “the development of the country for the benefit of all its inhabitants” while ensuring them “complete equality of social and political rights irrespective of religion, race or sex” – would best be served by courting the Arab parties to cooperate in buttressing them. They have every reason to be responsive. It is essential for the minorities in this country – even more so than for the majority – that the cornerstones of democracy not be eroded. The sanctity of the justice system, the freedom of press, the rule of law and order, the restraint of theocratic tendencies and the rejection of religious coercion are all critical to Israel’s existence as a Jewish and democratic state – and the fulfillment of the Zionist ideal.

In pursuit of that, the leaders of all parties should take this to heart and signal to the Joint List that they are ready for an alliance of one sort or another. The greater the stake and sense of empowerment that all citizens of this country have in any government that might emerge, the greater the chance for positive change in the realm of interfaith and inter-ethnic relations, as well as in our political culture. Should the Arabs agree, then they will indeed have played a central role in saving Israel from itself – and Zionism in the process.

If any of these thoughts leave you feeling uncomfortable, don’t blame me. Blame Herzl.