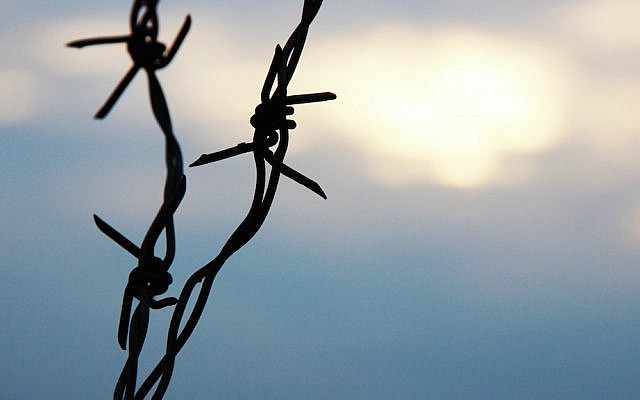 I was intrigued by a BBC story that appeared last week about a group of about 300 deer living on the frontier between Germany and the Czech republic. According to the report, fully a quarter of a century after the iron curtain fell, the deer still seem to believe there is an electrified fence spanning what is now a totally open frontier. As confirmed by GPS-equipped collars placed on the herd, the German deer stay on the German side, the Czech deer stay on the Czech side, and never the twain shall meet.

A biologist noted that this is remarkable because the average life expectancy for deer is 15 years, meaning that none living now would have encountered the barrier.

The report adds that scientists believe that fawns tend to follow mothers for the first year of their lives and develop a pattern in their movements, so the same area remains the habitat for each new generation.

In Czechoslovakia, exactly 70 years ago, spring 1944, not far from that same border, a young man named Michael Flack looked out toward the lovely, spring-like countryside surrounding Terezin and wrote:

The sun has made a veil of gold
So lovely that my body aches.
Above, the heavens shriek with blue
Convinced I’ve smiled by some mistake.
The world’s abloom and seems to smile.
I want to fly but where, how high?
If in barbed wire, things can bloom
Why couldn’t I? I will not die!

Behind an electrified fence, a generation ago, a young Jew dreamed of flight. The spirit of freedom never died within him. Like the deer thirsting for water witnessed by the author of Psalm 42, this imprisoned soul refused to allow his life force to succumb to grim realities.

Flack ran the children’s home in Terezin, caring for about sixty children aged four to nine, many of them orphans or who had arrived in the ghetto without parents.

And now, 70 years after the Holocaust – a full human lifespan – we ask ourselves – are we like Michael Flack, who looked around in the depths of hell and saw beauty and let his spirit soar?

Or are we like those deer in the floodlights, who, though they never themselves knew pain of that barbed wire, confine themselves in a virtual prison, their souls are imprisoned simply by force of habit?

Many years ago, Leonard Fein wrote that there are two kinds of Jews in the world:

There is the kind of Jew who detests war and violence, who believes that fighting is not the Jewish Way, who willingly accepts that Jews have their own and higher standards of behavior. and not just that we have them, but that those standards are our lifeblood, what we are about.

And then there is the kind of Jew who is convinced that we have been passive long enough, who is convinced that it is time to strike back at our enemies, to reject once and for all the role of victim, who will willingly accept that Jews cannot afford to depend on favors, that we must be tough and strong.

And the trouble is, most of us are both kinds of Jew.

At times we are like Michael Flack, allowing our spirits to soar with idealism and hope. And at times we are like the deer, weighed down by a burden of fear, a habit, by our anger, our feelings of victimhood, unable to transcend the shadows of the past.

On this Yom Hashoah weekend, let’s allow the poet of Terezin to light our way – and let the Jewish spirit soar once again.