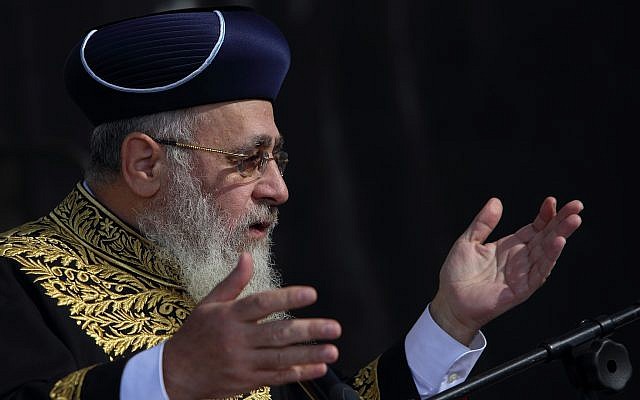 Israel advocates get their undies twisted in knots when enemies tag Israel an apartheid state. Polish officials set off a firestorm that threatens diplomatic relations between Israel and Poland by accusing Jews of collaborating with the Nazis. Words matter.

Yet, Jewish leaders in Israel and the Diaspora are unruffled and feckless at the bigoted, racist and misogynistic hate speech from Israel’s Chief and leading rabbis. I heard it all before in the 1960’s working the US Civil Rights Movement.

Shame on the government.

Shame on our Jewish community leaders.

Ignoring hate speech encourages it. It molders the society. Hate speech embeds self-aggrandizement that leads to demagoguery.  Bigots attract followers like flies to dung. Next, they block the entrances to schools and lunch counters. They make the “others” sit in the back of the bus. They even run for President of the United States and rise to positions of power excluding Jews from equal rights marches.

A spokesperson for Chief Rabbi Yitzhak Yosef recently justified to the Times of Israel (March 20, 2018), the Rabbi was quoting the Talmud when referring to black people with a pejorative and “a black person a ‘monkey’.” Reminds me of the white preachers and ministers using God to justify slavery and defy desegregation.

Say such a thing today in any Western democracy and you’re sacked from politics. The hater is a pariah in business, among the media, and in most pulpits. I hear no such shock and dismay in Israel. I see no action being taken that might reassure minorities and women the government and society do not tolerate haters.

There are no demonstrations outside Rabbi Yosef’s offices or home, at least those being covered in the media. Reporters are not hovering demanding at every turn explanations and further comments. There is no pot boiling over his remarks.

Torah scholars know words matter. They pick over every letter, word, and expression in the Torah and commentaries to define how Jews must act. It’s the words that define Judaism. Is Rabbi Yosef saying there is no place in Judaism except for white folk? Careful, Rabbi Yosef.  I’m told there are Ashkenazim who think only Caucasians are truly Jewish. Sephardim are on the outs.

Where does the bigotry end? It doesn’t. It becomes institutionalized. There are reports some Rabbis will not marry black couples. There are other reports, Sephardi boys and girls are not allowed in schools run by Ashkenazim.  It’s the words that deracinate, promote hate and bigotry, that justify and enshrine institutional racism.

Bad stuff happens when the “others” are belittled. Segregation. Separate but equal becomes the meme but the “others” get their fair share or parity. When women not living Judaism like “our” women are denigrated and called “animals,” what’s the next step? Slaughtering them like animals when they walk through the community? When rabbinic leaders paid by the State of Israel consider women not fit for public service or careers, as Rabbi Eli Sadan and Israel’s various Chief Rabbis are alleged to have said, words turn into actions. One claims that educated and financially successful women feel so independent they do not want marriage and husbands forsaking their role in family life where they belong. Another Chief Rabbi attributes a lion’s share of damage to the country “due to loss of morality,” because of women in combat units of the IDF.

Moreover, hate speech is the tool of useful idiots believing their words make them stronger and more popular. They care little if their mean-spiritedness undercuts the legitimacy of a society striving for stability, equality and fraternity already a nation among nations that delegitimize Israel.

The ebb and flow of battles following official reports to uproot institutional racism in Israel leave hatemongers free to raise their voices unhampered. Dealing with institutional racism is the easy part. Taking down those who espouse bigotry and lust after the recognition racist speech brings is the hard part.

So it will be interesting to learn if the findings in the new report from the Israel Government Unit for Coordinating the Struggle Against Racism spur any more reaction than previous reports? We know recommendations from the reports largely languish and fade away, but will the findings and comments finally beget action?

Dr. Seuss said it, “Unless someone like you cares a whole lot, nothing is going to get better, it’s not.” It’s time the government establishes an independent Ministry to Combat Hate and Racism with the power and free-hand to indict haters and racists with jail time and fines.

About the Author
Dr. Harold Goldmeier is an award-winning entrepreneur receiving the Governor's Award (Illinois) for family investment programs in the workplace from the Commission on the Status of Women. He was a Research and Teaching Fellow at Harvard, worked for four Governors, and recently sold his business in Chicago. Harold is a Managing Partner of an investment firm, a business management consultant, a public speaker on business, social, and public policy issues, and taught international university students in Tel Aviv.
Related Topics
Related Posts
Harold Goldmeier
Comments