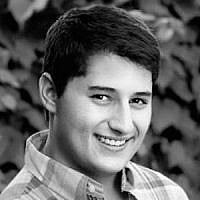 The Blogs
Noah Arbit
Apply for a Blog
Please note that the posts on The Blogs are contributed by third parties. The opinions, facts and any media content in them are presented solely by the authors, and neither The Times of Israel nor its partners assume any responsibility for them. Please contact us in case of abuse. In case of abuse,
Report this post.

The foremost duty of any government is to ensure the security of its citizens. In no country is this more critical than in Israel, where rogue states and terrorist organizations threaten daily life. Israel is blessed with one of the greatest and moral militaries in the world, and yet, military capability is only one facet of national security, and cannot be a substitute for effective diplomacy.

Maintaining Israeli security requires a responsible, fearless, and pragmatic government – led by a competent prime minister – to command the IDF appropriately, and utilize all possible diplomatic tools to ensure the safety of all Israelis. For the past six years, Israel has had governments, led by the Likud under Prime Minister Netanyahu – which have jeopardized national security at every turn. While replacing Netanyahu may have to wait, his narrow government of 61 MKs provides the Opposition led by the Zionist Union a prime opportunity to stymie the reckless and dangerous decisions made by the Prime Minister and his extremist partners.

Led by Opposition Leader Yitzhak Herzog and former Foreign and Justice Minister Tzipi Livni, the Zionist Union believes that ensuring Israel’s security requires a two-pronged approach: the first being decisive, unhesitant, but pragmatic use of military force when necessary, the second being the maintenance of a “diplomatic Iron Dome,” described by MK Livni as the responsibility of Israeli leaders to recruit support from the international community when Israel needs to defend itself from terror. Under the current leadership of Netanyahu and Likud, this pragmatic, responsible approach to security has not been implemented.

Indeed, at the end of Operation Protective Edge last summer, while Netanyahu was preoccupied negotiating with Hamas – the terrorist organization with which the Zionist Union believes Israel has no business negotiating – Tzipi Livni brought to the cabinet a proposal to utilize UN Security Council mechanisms to immediately begin coordinating a regionally-sponsored operation to demilitarize the Gaza Strip and reestablish Palestinian Authority control over it. Astonishingly, the Prime Minister rejected her proposal out of hand, preferring to submit to negotiations with Hamas in Cairo.

With this act, along with his continual readiness to harm Israel’s diplomatic relations with the United States and Europe, Netanyahu has proven himself unfit to lead Israel. Rather than antagonize the American government with inappropriate speeches – making it unwilling to hear Israel’s message – the Zionist Union is committed to strengthening Israel’s relations with the U.S. and Europe, ensuring that the world supports its use of military action against terror, and takes into account Israel’s positions in the course of the P5+1 negotiations with Iran – in a word, the “diplomatic Iron Dome.” 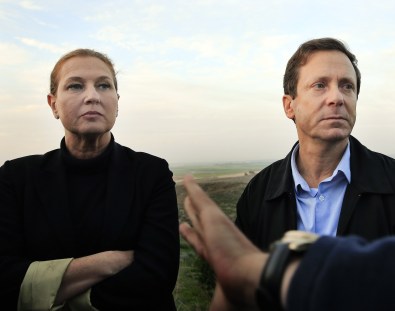 MKs Tzipi Livni & Yitzhak Herzog visit the Gaza border (AP/Tsafrir Abayov)
About the Author
Noah Arbit, a native of Detroit, is a student of international relations and Israel studies at American University in Washington, DC.
Comments