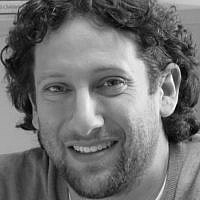 The Blogs
Judah Koller
Apply for a Blog
Please note that the posts on The Blogs are contributed by third parties. The opinions, facts and any media content in them are presented solely by the authors, and neither The Times of Israel nor its partners assume any responsibility for them. Please contact us in case of abuse. In case of abuse,
Report this post.

Last Thursday my wife sent me a link to a Hebrew newspaper article titled, “Israeli Study: It Is Possible to Diagnose Autism at 9 months.” The article goes on to present new, unpublished research that does not, in any way, make this claim. The research in question points to children’s failure to attain specific developmental capacities at 9 months of age as indicating a greater risk for eventual receipt of an autism diagnosis. Not all children who failed these tasks were diagnosed with autism and not all children eventually diagnosed with autism failed these tasks — far from it. No one was diagnosed with anything at 9 months.

This doesn’t mean these findings aren’t worthy of attention — they are. They contribute to our attempt to understand the early development of children with autism. But the media does a disservice to parents, the autism community and the researchers themselves by sensationalizing the headline to the point of blatant inaccuracy. In fact, studies looking at “diagnostic stability” – the degree of confidence we have that a given diagnosis will remain accurate and stable over time – have indicated that autism can usually be reliably diagnosed closer to 18-24 months of age.

This challenge of the media misinterpreting findings is not new to the field of autism. Just 2 months ago, an online media outlet pronounced that researchers had found a “Major Cause of Autism.” This article, picked up by the mainstream media, was based on a study published in Nature, arguably the most prestigious scientific journal in the world. The study is indeed interesting and important, contributing to our understanding of the role of the microbiome in autism symptoms, but, here again, the media masks the true significance of the research by choosing to sensationalize the findings. The researchers themselves never claim to have found a “major cause” – because they didn’t.

These dramatized headlines serve no one. Families become misinformed, researchers misrepresented, and media mistrusted. The task of translating academic knowledge to the community is a formidable one – it would be nice to have the media as a partner and not as a further contributor to this challenge.