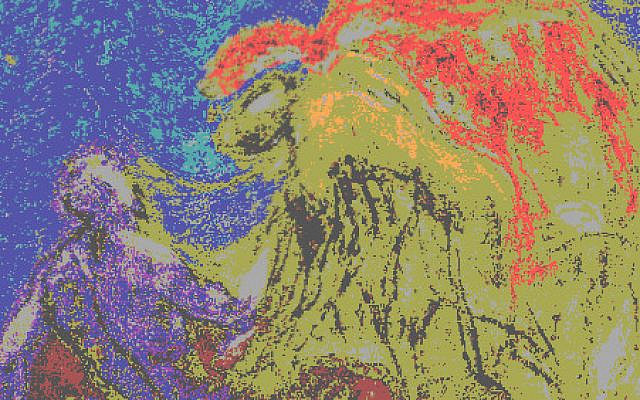 Jerusalem in Flames; drawing by the author

In this scene the Eternal Jew escapes the Roman siege of Jerusalem, and wanders north.

Jesus died and so many another world redeemer, world assailer, them that hacks at the gnarly roots and overgrowth, the sickly vines and poison vines that tangle this world. But them shoots ever renew. The Tree of Life it is! And in its jungly canopy, heavens are begotten. Yet they hack at the root knowin’ not what splendorous estates reside in the thorny and splintered branches them roots sustain. This one, a hemlock that lurks in the shade. That one, a cedar, its arms thrown out in the glorious sun. But all intertwined the sappy roots.

So many blind messiahs tryin’ to dig out Rome’s roots. That were the great passion of the day. But the passions and fashions of Rome gripped me no more. I was clappin’ to another dictum. Read Malachi, ‘I, an Angel.’

But Rome kept clappin me, the same. Gangs of soldiers roamin’ the streets. And there I were, a messenger of the Lor fleein’ from the burnin’ House of God. Like Adam, as he stumbled through the gates of Aden, benumb with excess of panic and reproach. Not angels but animal headed men guardin’ the gates back to my Aden. I heard that the sage Zakkai excaped, hid in a coffin. That took a plan. Me, in the frenzy of arrows and flame, I goes to leap from a parapet, to kill myself and on with it. And there! A burnin’ siege tower. I throw myself into the crumblin’ hulk, climb down its ladders and leap as it collapses. I must have looked like a flamin’ demon flyin’ out of a pillar of fire. Soldiers scattered from me. Singed and sooty as a blacksmith’s boy, I stumbled and tumbled down the scorched Jerusalem hills.

But to what point? Abandoned by God and maybe I’m the last Jew. So I thought that dirgeful night.

I tossed in sleep in a fox’s grotto. Dreamed of them foxes dancin’ around me. In drool and slaver they tear out my guts. There I lays, feelin’ nothing, as if I was an eyeless corpse. The leader fox, he bends down, and distinct he says a Torah verse. And there I woke. And there a fox! He turns and trots into the hills, and what I heard him say so clear, now, it seems, is not one thing. In my memory both of these phrases:

Long I lay in a dreary dawn.

And there I was, like a king’s envoy, not knowin’ if the king still reigned. An angel bedraggled from the House the Lor. I, the messenger, and the message, I.

Bad times and rugged scapes that I hauled my way through, many a year. I was sure that Zeus and his kind, or some resurrected Canaanite demons had overthrown our Adonai. Wars of the Lor, and the good one lost.

I didn’t yet know that rebellin’ be futile, and whoever wars against our Lor, battles against themselves in their own soul. We may exile the Lor from ourselves but whenever we stop our inner rebellin’, we think, “Adonai has returned to me.” Like thinkin’ the sun is movin’ in the sky. God don’t move. We do.

Back then we was all so very young. But I suppose we ain’t much wiser now. Now Adonai’s palace was burned to the ground. Across the night skies like northern lights the guileful and shifty Roman gods in fugitive shapes and false rewards drive their worshipers to frenzy and feast. Hidin’ in hovelly cities and ruins are the few remains of Adonai’s priests, them as still had the strength and courage to helm this rudderless, storm-tilled ship.

I might have gone south to Alexandria, where Jews a-plenty carry the Lor, or down the Nile to the outpost isles, or even into Abyssinia where we’ve carried The Name. Or north and west around the Western Sea. Every village and town, and all the isles have houses of study or synagogues. Maybe a few were spared the crush of the Roman devils and their grinding mills. But no, I headed up the Galil through valleys eroded by our lamentations, prayers and psalms.

“Zion’s roads are mourning. No one comes to the festivals.”
Lamentations, 1:4
“Daughter Zion is down cast, her, so beauteous, her, Yisroyel.”
Lamentations, 2:1
“A dry wind has passed over, and we are withered.”
Psalms, 103:15

Here heaven once crowned our hills. Our houses of layered stories, strung atop ridges, lightin’ the nights like strings of pearls, many a one around the neck of the royal bride proudly walkin’ with the King of Kings. Under domes where ministering angels sang, Metatron and his fiery guards opened the channels of our prayers. Jezreel, Tzipori, Tiveria, Tsfat. Pearls unstrung on my road north.

I walked and prayed my windy ways through these holy halls charred to rubble. Smoke still drifted through the jagged timbers. Screech of owl, and in his deathly claw a screechin’ rabbit, his last confession. Hear the squeal of the hearse’s wheels and the dirgy moans of the mourning doves. Their trains wind mile after mile through the buryin’ places, all you can see. Past hill and vale where once the pearly lights shone. Rocky soil. Remains of a vast palace, blasted. And every stone markin’ a grave.

That’s what I walked through, asleep and awake. The pillars that hold the azurite dome where us and God walked hand in hand, awe-filled domes where Torah was inscribed in starry fires, picture and word. Now a pile of rubble. The work of Rome.