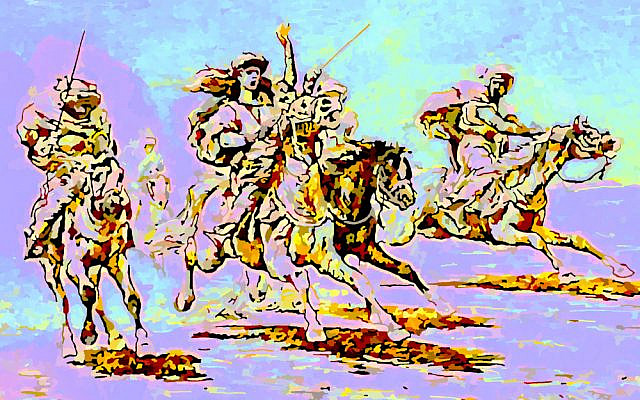 In this scene the Eternal Jew, against all good sense, criticizes the Caliph’s theology. Yikes!

An now we hear them, and here they come!

I seen this before and I knows it well, seen my Naomi and her many incarnations fall beneath the sword and hoof and boot. And me, stripped down to my soul, called out to God but there was no repeal.

Ready I am. And then, behold!
Umar at the lead and his special guard. Turbans bejeweled and the brocade capes, banners a-flutter and tassels a-horse. Outfit for show and not for war. And there we are, us ancient bookmen, facin’ the Arab war machine.

From the midst of the horse’s tails and hooves they brung forth our translatin’ Muslim Jew. Weary and feary and wary he seemed, but a rancor rippled across his eyes when he seen the Elders of Zion and me.

Soon as I seen him, I begins my speech, anxious and hyped I couldn’t hold back, when the caliph booms out, probably, “Silence dog!!” Then he waits a pompful moment and launches into the speech that he prepared:

“We warrior prophets are raising a sword of peace, and bringing the era of submission in our regions of God. Ours the Lor that all the realms must proclaim and praise. Now hear the decrees that we are imposing:
“Why are you Jews living here? You have a land where you belong. There your history and there your House. The Prophet has taught this in Sura Five. There we once turned our kiblah* to you and there we can bend our knee with you. And if not now, the time will come when the Lor will grant you the strength and will for you to return and restore your House, as our Prophet teaches in Surah Seventeen.
* the direction to face in prayer; now towards Mecca

“But if you want to live in our Region you must assume Muhammed’s way, and he the Prophet is the end of the line. Or if you are warped by an earlier book, taxes you’ll pay as a proof of your warp. Or if you reject the only Lor or reject our rights over your land, then jihad will be our permanent state.

“Declare your purpose here and now.”

Phrase by phrase he spun his vortex of words which his Jew translated phrase by phrase. And then the Jew stood in silent scowl, with Umar a-mount, hand on sword.

And I a-spin in the charged words, lost myself and my particular voice. All I wanted to say to him is,
“Poor as we are, we will pay your tax, and live to serve our Lor as we may.”

But other words, phrase by phrase opened my lips and my mouth declares:
“Who can say the way of truth? The sages know many a ways. But our Torah teaches, at the highest rung, the message of the Lor needs no sword. A sword is for kings and wolves such as them. And our Torah teaches in the highest rung, the Lor is one and His Law is one for the homeborn and the stranger alike. If many the law then many the gods. And our Torah teaches that in the highest reign the region of peace is the world* of God, and has no borders in this Pharoahy world. But you, behind your sharp edge sword, make your region of peace a killing field.”
* others say: word

Pale as a shroud a dead man wears, my translator Jew. He turns to Umar, his voice choked. And shock freezes my limbs as I grasp what I done.

From the tomby silence, the Jew found a voice. Slowly, steady, like a horse-drawn hearse, word after word, clip after clop he psalmed our way to the burying ground. And as he spoke his sing-song dirge, like a lithe and graceful dancer, Umar twisted and slipped his bow from a sheath and turned, and with his other hand slid an arrow, quiver to bow like a slow, ecstatic Zoroastrian dance, as if to spread his hands to fly. The twang, the zhing, the translator fell. Not me, not I, who deserved the strike. Why him? It was I who deserved to die.

The dance of death performed for me. First time I seen it, but not the last.

Umar shouted his furious commands, then he turns and rides, him and his guard and most of his horse, leavin’ behind footmen and archers and a chief or two.

They commandeered homes around the square, and at the synagogue set up command. But torches weren’t lit and heads didn’t roll. Just that one apostate lyin’ in a pool of blood, and two of their soldiers posted so no one could come and bury the man.

Says Mar Rav Mar,
“I speak their tongue. That Umar told his men to watch our town, and see that we don’t rebel. If we do, they’re charged to slaughter us all. If not, just collect some heavy tax.”

Then I asked the rav,
“Why did he shoot the translator Jew? What did he say? He took that arrow tellin’ my words.”

Says Mar,
“He was talking so hoarse and faint I barely heard. But this I guess: ‘He didn’t repeat the words you said, at least as best as I can tell.”

The days grew dim. Our colors faded in the alchemic stew that boiled our souls, in the turmoil of years and collapse of Byzantium. Persia too crumbled back like its mud brick houses in a drivin’ rain. But this drivin’ rain were hoof and boot, fire and fury, bow and sword. Like wave after wave of wind and ice, snow and hail thrashin’ the lands. Blizzard ragin’ out of the south. Islam.

But me, I was lifted like a grain a sand outa my family and outa my home and outa the houses of midrash* and prayer; outa my street, and outa my fields, and outa these lands in the blindin’ storm. Wind and fury and ecstatic faiths, inspired by Muhammed, spear and man.
* interpretation, embellishment

Next episode: the Eternal Jew finds himself in Alexandria, Egypt.