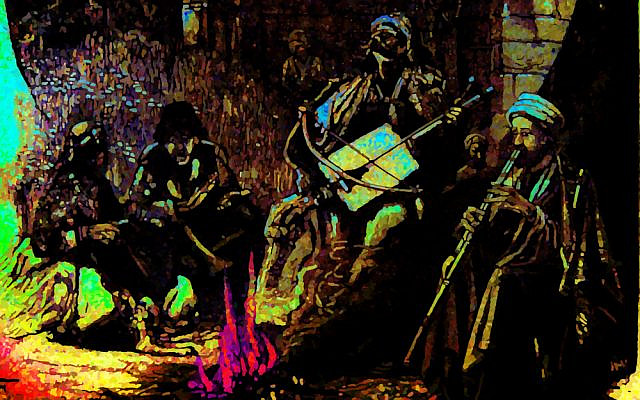 In this scene the Eternal Jew reflects on his first wife, her who is now just a memory of blessings, and he remembers a parable…

Oh, the wars of the Lor have brought us low. So busy hackin’ with sword and word, burnin’ down fields burning out souls, conquerin’ lands and devourin’ men. The scrolls of the Lor all smudged and streaked. The ink all runny and the spirit of it, too.

Thinkin’ of this, a parable floats across my mind, from Eichah Rabbah.*
* midrashic commentary on the Book of Lamentations written in Sura by some friends of mine.

See, there is this king who is makin’ the rounds, lookin’ for a wife in palace and tent. Calls him a scribe to cut a quill and stretch a skin and mix some ink, as he will dictate the many terms of a royal contract to troth a bride. Seems he knows the one he wants.

States the ketuba*:
“I assign through this contract: for my bride, a palace and its honor guards, hills, lands, and river, fields and crops, kitchens and their special cuisine, robes and scarves, stones and gems, linen garments fine of weave. This and more he promises her.
* marriage contract

The blast of horn, the thunder of drums, a crowd as far as any eye can see. Never again such a wedding day. And such a couple! Passionate, proud; the battles of will and the poems of love.

But then the king has to sail away. Who can know the heart of a king? The king is gone, the queen alone through plow and plant and harvest times. Rumors start and rumors grow and secret desires wake and stir. A throne will not stay empty long, nor the bed a king has made when he is gone.

And in her chambers paces the queen. Her long nights. Her longer days. Golden gifts and gilded tongues, but trinket words won’t win a queen. Long and longer this goes on.

And then appeared the king in court. Traitors flee, pretenders make denials, usurpers sink beneath their lies, and so the queen’s trust is confirmed. Asks the king,
“How could you stay true?”
And she,
“Whenever doubt arose I read the ketuba you wrote to me, and doubt did fade and faith renewed.*”
* Parable’s deeper meaning: king = God; bride = Israel; marriage contract = Torah

Well, I didn’t remember this parable like that. Just an image or two sparked in my eye and the whole of it was all right there, which I then filled out so you could see, and learn another piece of me.

But when that parable twinkled into my head, at the same time, there was my wife! And all my loves that were shinin’ in her. In that instant I felt whole worlds. And then it was gone. And there, a-glimmer like the first rougey rays at the end of a mournful night, there I sensed my Lor enfolded in the nightgown of my wife and in this midrash of kings.

Them the most obvious layers that formed and collided in my memory, carryin’ their colors and music and taste in the dense feelings of this moment of me.

But Naomi, my wife, is the one I hold fast. Like a master painter with many a brush and a palette of colors, vibrant and thick, rapid the multiple hues he spreads with each stroke of the brush, overlayin’ glazes, in the blush of a cheek and glint of an eye. And as them shades all merge into one, so my Naomi and me are merged, lain together in the mazeful art of the artist who paints the canvas of us all.

I looks around at the troubled souls, their shout and curse and beg and cry; their angers and fears and bitter sighs. Love all torn or twisted tight, lives all broken and pieces missing.

And that greatest comfort, enduring love; oh how hard to find it here! And then that reaper cuts us down and casts our spirits into the night to cross those seas so drear and dread to a new body an strange days, and our search renews. Who will find their ancient partner yet again? Shekhina! We, so coarse of sense, we cannot see you dancin’ for us with our dogpack minds and sexual eyes.

I remember such lovely women. They dance and some, they even remove their veils, and, who am I? But nonetheless, in a dream a voice declared to me,
“Naomi’s the one!”
And blind as I am and full of doubts, I heard and obeyed. Only with her have I danced. Hers the face of Shekhina in me.

And what a contrast, Naomi’s love, with the love I live with Adonai. These the tales of our passions and fights, our battle of wills, and the tests of our love.

Sorry. I wondered into myself, all lost in Alexandria.
This, the pride of the Ptolemys with its wide boulevards and promenades along the harbor. Its architecture of ornate brick and carvy stone. Roads all paved. Imagine that! And plenty of canals and mosquitoes too.

After Umar’s siege of the town, and the Persian wars that come before that, the town, like an anthill kicked by boys, gathered up stone and bricks to rebuild. Umar’s men, like cats, aloof, watched the mice, but rarely bit.

Us Jews, we fled. In the wars of the Lor, it seems the Christians think our Lor is different than theirs. Them pagan demons, that hide from Adonai in us, stir up emotions, angers and fears, envy and the need for simplicity and conformity. So many ways them demons figure to rile a guy up. And rile they did. Preacher and mob, riot and plunder and tear us asunder. We fled back east; fled down south. Some, they say, even fled west.

Now hardly a Jew is remainin’ here, and them as do, keep their faces low, secretly sizin’ the edge of your sword, and constantly checkin’ how pointed your words, and manys the glance behind their back.

I met a merchant….

In the next episode, distant Andalusia dogs our hero.