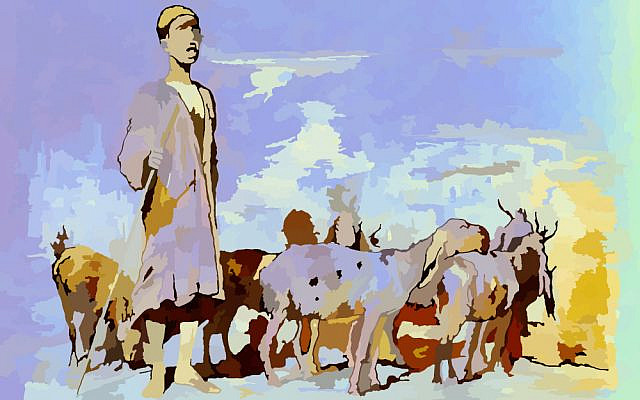 All day I lain in the burnin’ sun tryin’ to warm the chill in my soul. But gnawing hunger and that empty beach spooked me and bit me into movin’ myself. That beach, a hundred paces deep, smooth and nary a mark of life. And behind it a scrubby and droughted earth. The lone and level sands stretch far away.

It’s drownd in the sea or parch on land! Too much or not enough water for me. But my mouth was all sere as these blighted shrubs, so I followed the shoreline lookin’ for signs of life. West and a little south, I would guess.

Manys the parasang I walked, ‘til, inland, I spied some rugged hills, not far, and I thought,
“Water, mayhaps, or some juicy plants that I can gnaw.”

My neck all raw and my throat as cooked, and before long, draggin’ my way through the bush, my pants and legs snagged and pricked, and what’s left of my feet, there’s not much to tell. And then, behold, above the brush a dirty face, his hair all knots, of a child, all wild, surely the spawn of them cannibal types, like I told Nakhum.

I was just about to turn and run when I see he’s chasin’ a little goat, and strange, I remember the blessed midrash of the lad and the cave direct to The Eretz. So, instead, I turns and follows the lad, thinkin’ he’ll lead me to that secret cave, and, faith of the Lor, in a moment’s time I’ll emerge in the hills by the town of Tsfat.

Odd, how thirsts can take us by the ear down roads that make no sense to walk. As I followed that urchin, I thought to myself,
“Why do I follow this bedouin pup? He is no angel sent from above, nor Elijah with all his mystic ways. And here in this idol worshippin’ land there ain’t no secret cave to the Land.”

But weavin’ in and out of them sceptic thoughts as if they didn’t exist at all, the opposite thoughts were urgin’ me on,
“This is the one that knows the cave.”

Oh, how I wanted to find that cave, and how I berated them wanton thoughts as I ascended the rocky and scraggy hills, tryin’ to secretly follow that boy. Climbin’ the crotch of washed-out gullies, then scramblin’ the jagged face where they end, drenched in sweat, the dust all caked on my lips and tongue and around my eyes.

And then that stinkin’ rat disappeared. Him and his goat, down some spider’s hole. I swear he stepped into a bush and was gone. I kicked that bush and fell…. Down into a dark and bruising cave! Gainin’ my feet I stopped to peer into the depths. Behind me the light was blindin’. Before me an utter dark.

In that blind and dark a clatterin’ arose. That boy and his goat, dead to rights. But I can’t move, bound tight by the dark as a cool breeze washed my chalky face. But, strange to tell, a floatin’ light appeared before me, a tiny glow. Just enough light to feel my way haltingly following that angel or boy.

This was the cave! And this is the way back to my holy Aden home. And this the holy and mystic light that the midrash assured would show the way.

The sages teach there is no before nor any after in holy time,* that only three fingers separate any two places in the upper worlds. And here is the proof! In a few steps this cave will end, and my holy land will spread out, Temple and all, and the Son of David will welcome me home.
* others say: tomb

Now I see an end to the cave. Lights streamin’ in, like the light of the Lor. That angelly boy is smilin’ at me, his arms spread out to welcome me home.

The baked air slaps my face as I climb from the earth, born like a babe from the womb, when a wicked blow astounds my head. I wake, an earthquake splittin’ my skull. I’m bound like a lamb at the butcher’s door, and doubled over a donkey’s back, seared by the sun and torn by the cords that tighten with every step of the ass.

Leadin’ the donkey and scattered all around are a motley band of tribal brutes. Maybe they’re cannibals that will eat my flesh or maybe demons to feast on my soul.

Beards, tight braided and tanglin’ down; hair all matted, curly and wild. Their dirty turbans, and sashes strapped around their waists with dagger and sword. And women-folk, too, in heavy shawls and colorful skirts and twisted scarves. Silver bangles, bulky and crude around their biceps, ankles, and wrists.

Talkin’ in tongues I never hear’d, some demon talk from the nether world. But then I catched some Arabic phrases like “marketplace” and “sell a slave.”

We cross a broad and deserted waste. For two days steady we caravans. Me, fading between terrible dreams and abject misery, half awake.

Finally we come to a tower and gate in a massy wall. The customs guards speaking Arabic question the crew that kidnaped me to sell as a slave.

Uncouth they was, of the Berber tribe, known for maraudin’ and rebellious attacks. But traffickin’ humans — no problem there. The guard takes some bakshish and waves us on in.

This, the famous Kairouan. In a mangy and broke-down han* we stop. They untie my thongs, ungag my mouth and push me like a bag a wool to the floor. Like them leathern thongs, all kinked with knots, hung out for days ‘til the kinks relax, I lay in a heap in the dust and dung for a couple of days, ‘til I can stand.
* caravanserai

They feed me just enough to survive, foul tastin’ water and old flat bread. Then they drag me, bound and gagged again to the open market to sell me off.

There I be in the mobbed square, standin’ naked, the crowd all a-hoot, pinchin’ and tweakin’ and inspectin’ me like I was a rooster or an antique rug.

In the next episode “a man with mean lookin’ eyes and a gash on his face” purchases our hero.