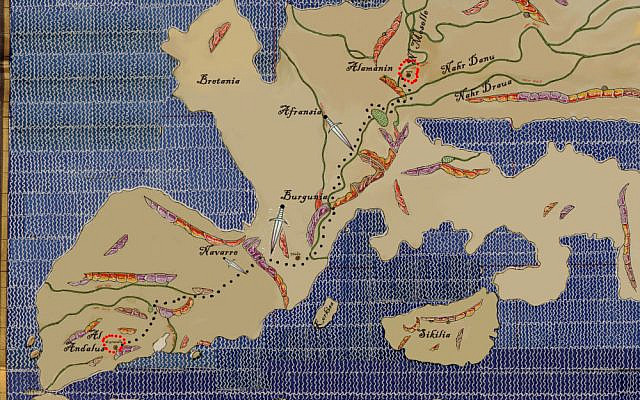 Map To Metz: modified version of the public domain image of the historic map commonly known as Tabula Rogeriana, created by the Arab geographer Muhammad al-Idrisi in 1154.

In this episode our hero is robbed by a dybbuk.

Long the stars etch lines in the sky as Batkol waits alone in our room before the vizier reaches the end of his instructions, and the routes from Tarshish to Babylon are drawn. The oil lamp flickers its last rays; Batkol readin’ psalms; the first of the calls* drifts through the window in supplicatin’ tones; and me, like a wraith, I slips into our room.

A nightingale sings, homeless, alone; the morning sky in shades of slate; a donkey clip clops through a city gate, burdened with a lonely man of faith; he carries a message and a heavy weight. Morning unfolds us out of our night.
* to prayer

And the times enfold too fast to hold. Rabbeinu Gershom is sick to death. The Light of the Exile is flickerin’ away, and I must deliver a message to him. Our fate, and the Jury on high, await.

You can see above the map of my route to Metz, with a number of places that I will tale about.

I must travel alone thru Frankish Gaul, without a guide or a body guard. Says the vizier,
“Even one other man with you will draw hard stares. War is simmering; suspicion seethes between the Muslims of Andalus and Christian Aragon which is acting like a wounded bear. And further north in the Pyrenees opportunity beckons raiders from Gaul. They see how Castile fights for her life, bloody, snarling, looking for revenge, leaving her meaty flanks exposed. You will travel light, carrying a decoy tube with harmless prayers for a sickly rav. But hidden in layers of the tube’s wall two more messages urgent of need. One to our ally the prince of Metz, and one to Gershom, who lights the West.”

And so I give my donkey a kick. ‘Move it along’, I thinks to myself. ‘Your Batkol is waitin’ safely at home, her body guard sleepin’ with his favorite wench.’

As I clip clops into the hills I feel the rawhide thongs tighten and strain around my donkey’s well-fed gut. But I feel like I’m also caught in its grip, a death-grip squeezin’ at the heart of me. Its not just the road and dangerous ways, unknown routes and the branchin’ nodes, the ways of the donkey and the ways of men, their checkpoints and tolls, their languages and laws. If I’ve learned something these thousand years it’s how to keep calm and skirt the crowd. Nah. I like to put my face to the road.

But now for forty or fifty years the face of Batkol and the voice of her; her touches, her smiles,* the way she thinks…. Certain, our bodies are separate shells, but the soul of us, where is its edge? Is the shell of our body the shell of our soul? The rawhide thongs that choke my guts are the sinews of me that have grown into her. I remembers seein’ a sketch of trees, two of them, alders, side by side, coiled together, trunk and branch, the leaf of this as the leaf of that, and into the earth their roots, too, become one tree. Batkol and me.
* others say ‘smells’

‘Sinews of soul’. That’s a metaphor on somethin’ without structure or shape, and still its squeezin’ my guts the same as the thongs that cut my donkey’s skin. Is it just me feelin’ alone or our interwoven selves as they fray apart?

Windy thoughts in the clip and clop, in the rustle of leaf and the twitter of bird, in the jagged shadows and liminal shades of rock and dust and bush and brush floodin’ my senses like waves on a beach, that I hardly hears, blind as we are.

A dry twig crackles off to my side, dissolvin’ into the crag and bush. Jinn or angel, man or beast walkin’ with me or stalkin’ me through rivery vale and wivvery trail. That ghostly shade is on my tail.

The shadows lengthen, the feathery clouds are edged in rose and madder shades. Hours ago I left the main road for narrow paths worn by hermit and deer, where inquirin’ eyes and waggy tongues are rare. Now dusk, and the dybbuk and me, and my ass all sharp with dung and bray, and nowhere to bed that is predator safe. This place of prayer; will I be the prey?

I lets the donkey forage his meal while I sits on a rock by a gurgly brook and eats from a pouch, olives and figs and a hunk of bread still moist inside. The donkey returns with the last of light and I ties him onto a sapling pine. Now careful and slow I feels my way with my feet, walkin’ in midst of the creek downstream, maybe a hundred amot,* my splashes mix in a fine harmony with the lappin’ of chords from the melodious brook.
* measurement of about 1.5 feet

Safe now, I feel a pebbly bank when a hand grabs my arm and another my hair. I shouts and lurches into the brush and stumbles. Lyin’ in the raspy weeds I listen long in the thick dark. Nary a sound. Disgusted, I thinks, ‘Branches they were and nothin’ more.’

All night I fade in and out of dream. I’m asleep in a graveyard, overgrown. The arms of the dead reach out of their graves tryin’ to pull me into the earth.

Bright sun burns my face. I wake. I can hardly open my eyes. The light burns through trunk and branch and leaf, through rock and pebble, through hand and foot. Without effort I rise from the ground. The babble of brook like the tropes of prayers. “Kadoesh kadoesh Adonai Tz’vah-oet.*” My eyes are open just a sliver. I see my body lays in the pebbly bank, like a shadow it is, like delicate lace. It fades and crumbles. It is no more. No! I struggle to open my eyes, to rise from the ground, but I cannot move. I am covered in dirt and stone and leaf. Like a door closin’ on a tomb, the dark descends. My thoughts decay into terrors.
* Holy, holy (holy) is the Lor of Multitudes

In a cold sweat I open my eyes. Sun, just arisen above the hills, glitters through the thick canopy. It glitters through my hands, insubstantial as lace, like rotten branches decaying in the earth. I lays there a while til I can move, still emergin’ from the dreamy worlds. A night of terrors and stalkin’ death. A night of fleein’ murderous thieves. A night lost in hostile towns. I checks the coiled message I bear and groanin’ I sit, bent and bruised by the stony bed. The glare of the sun falls on my hands. It must be late. A day and a night and see how I’ve fallen behind on my way. I groan and stand.

I retrace my steps in the groanin’ brook, smellin’ for the place where the donkey is tied. But my donkey is gone with saddle and blanket and food. Run away? She’s too afraid for that. Thieves or murderers? In this wilderness? The dybbuk got her, sure enough.

As I climbs from that vale, dybbuks and ghosts are grabbin’ at my arms and pullin’ my hair, bitin’ my ankles. Whistle and hoot, croak and creak, as they mimic the voices of critters and birds in the forest around.

A village ahead. Hounds bark. Starin’ eyes and suspicious grunts of bent women, toothless and gray, in layers of ragged skirts and scarves. Their daughters look up from grindin’ wheat in granite mortars; look up from the splash where they pound clothes on rounded rocks; look out of the doorways and window slits where children a-plenty cry and scream, shout and whine, tussle and pout. Infants nursin’ on the bare breast.

I hears a donkey bray, and there in a narrow pen of bramble and slate a well-fed ass, reins in his mouth, and a fine saddle strapped on his back. I goes to inspect. Is that my beast? But a man picks up a heavy stick. Another follows with a crude pick; and two or three more, and the story comes clear.

The barkin’ fades and one last glance over my shoulder. Heat of the day.

In an open meadow under shady trees, the field, speckled with yellow and white, swayin’ in the late afternoon breeze. The clashin’ concert of insect and bird. I stops for my first bite of the day, and probably my only, a piece of white cheese, a hard biscuit, an olive or two.

And so I walks through a valley of deaths, one of many I pass on my way. Not like David, I have my fears, but also green meadows and babbly brooks; straight paths and paths that straiten me; comfort and dread, rod and staff. Amongst my enemies I must eat my meal, but more often alone and more often a lack. Anointed by dew and stream and storm, followed by goodness and mongers of war. This my rest in the House of the Lor.

In the next episode our hero finds himself in a rough part of the capital of Aragon, while back in Garnotta, Butkol stirs it up.