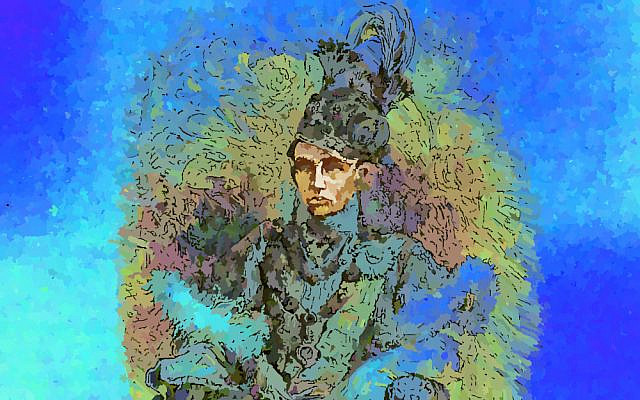 In this episode a lion, a wolf, and a fox try to make a home together (with an extended nod to Rumi and one of his parables).

“Long year ago in harder time me and wolf cohabistate. Harsh time they beens, and all our need as unfulfills. The wolf him think: ‘Foxee mus serve me desperate need and stem the hungers in me gut.’ A cruel master be that wolf. He bite me neck. He claw me flank…”

Then interrupts the calmer king.
“This wolf is like a king of flesh, a vile king and all unjust. And there’s the fox serving him, abused and still he’s dutiful. You think that I am such a king, a-wolfing you, to bloody you? But, no! Your parable is wrong. A lion, not a wolf am I, and you a cunning Reynard fox avoiding duties, slinkin’ round in my luxuries and happy ease.”

“Oh king an flesh, you not sees all me tale. Listen, you.

“In them time a king a beast, a lion rules a wealthy house. But glooms and famines broke his door. There hungers eaten out his heart. He call a wolf and me to court.
‘Live by me, an we might live.’
“So proud a king he hide his shames to need a helps of me an wolf.”

“This parable, it’s over-worn. The hungry king, the selfish king will yet devour all his house: first his herds and herder dogs, and then the trusty wolf and fox. Such a treacherous king as he is not the ruler of this land. But wolfy Basques and Reynard Franks are droolin’ all around my throne.”

“Oh fleshy king, oh gnashy tooth. How bitteres you judge your court. How cynical how feariful your measurin’ your people worth. See, once again, before you hear me parable your cut its throat.

“So let me comb me knotty tail to brush the burrs and morals out, and mayhap when me done you see, all quench your royal thirst to me.”
Curious, he nods his head, and then unknots his royal boots.

“And then that lion an wolf an me pursue us hunt; me have a plan. In clever move an tricky feint us trap an ox, a goat, a hare. Then snarl, pace and bloody drool and there upon the ground the three. Him lion tells the hungee wolf,
‘Divide the take among us three.’
“The sagey wolf, him justy rule:
‘Him ox for you; for me the goat; and little kit him gets a hare.’
“And now a single flash a claw, just like wolfee swipes on me and tear me ear or blood me hind, the lion swipes at wolfee’s neck. And there he fall, a gurgle, dead. An lookin’ me him purrful say:
‘Now little fox, divide the take.’

“Him lion look me up as down, as like to peel me skin away to weigh me thought and judge me taste. Then with drooly fang, him say,
‘Wise an clever, lucky fox. Wise to know the worl is mine, and all you hope depends on me, and I divide as by me wont. Clever learnt that truth so quick and let your terror hold your tongue and not let hungers talk through you like mister wolf, who thought himself to be so wise, when all he know be how to bite at heels and tails, and howl in Torah fragments him once learnt, as if him has a voice. Him think him would be king himself, me usurpin’. I straightens him. And lucky you, like Yisroyel, liftes out of Egypt’s grip. I liftes you from Romulus, life for you and venge on him as you be want, but lack the jaw. Yay, I hears your secret wish.

‘But hear a little warnee, too: don’t go cleverin’ yourself into me terrible swift claw.’
“And then, as if an after-thought, pointin’ to the ox an goat,
‘The flesh be mine, as me divide, so eat your fill an worry not.’

“Worry not! Oh no, not I. Me takes the hare, me trots away, sneakin’ many backward glance.”

“Good advise, oh yes, oh king. Beware the lightnings in the storm an heed the wind that blows the cloud, that carries lightning in its cloak. And watch the waters of the lake to mark the ripples of the wind…”

“The sun is nearly set, my fox, and my decrees like evening winds write their ripples on the lake, and your clever prattling won’t delay the call to prayer, the call to bed. Comb out your tale. My bed awaits.”

A sly and chill and nasty glare ripples over her foxee face and then is gone; a girl again standin’ in the thickenin’ shades that lurk in the corners of the room. And then that weird and growly voice…

“Words reveal as words conceal. Me tale may be hard to grasp. Like to say, who been that wolf? Wolfee hides in well known shape, in minister and magister. Me say you pro’ly knows him well. Him tend your sheeps, him fleecin’ you. Him pander you as plunder you. Slinkin’ sneakin’ down you halls, full a greeds and full a schemes. He nuzzle you til he can bite, or push you from a cliffy edge, an all the whiles is tell himselves how him been servin’ king an God.

“But some explains it differently. Gnostic flips it all around. Him say the wolf been slandered bad; him wolf’s the true an hidden God. Him fair and sharin’ all his wealth just like him done with ox and goat. Him battles with the demon god — the lion in me parable — who rule the outer shell a worls, claimin’ everything be his, corruptes faith and crueles heart in him plan for conquer all.

“So, Reynard, in this parable who are you, wolf or fox? And lion, who is he to you, demon king or righteous King?”

“Me not in this parable. Me just a true an faithful maid who serves me Lor with honest work.”

And me, I sees the sun be set and darkness reaches its crouked fingers into the corners of the room. Me time to delay be closin’ fast.

“The time is come,”
intones the king, and like a lonely widow’s sob, the muezzin calls to earth-bound souls, and church bells eulogize the day. The king’s velvet shirt sighs as it slips off the satin sheets.
“Undress behind that screen,”
he grunts as he yanks off a leather boot. And in the dark he sees a fox, long of snout and pointy ears, drift like the fadin’ call to prayer into the fading colors of the screen.

A long minute, and then one more, and he hears the paddin’ of foxy feet, then lemon fragrance caressin’ his senses. Then a soft cheek, no whiskery snout, then his hand reaches down, hesitant, and a soft bottom, no furry tail…

Morning. The king opens his eyes. His bed is empty, but a faint smell on his pillow, lemon, and some auburn hair of that foxy maiden, disappeared.

In the next episode we return to Saadia, the Eternal Jew, in a prison in Gaul.