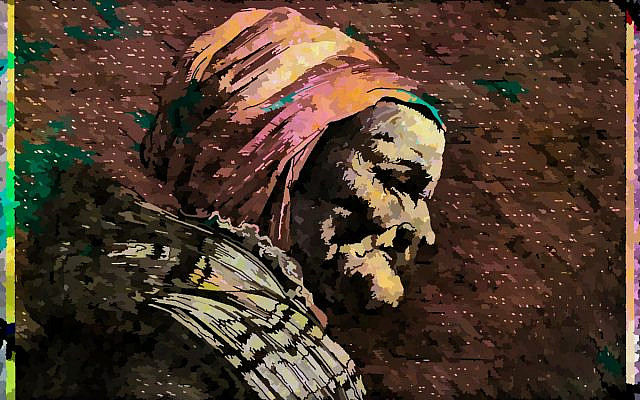 Old Woman, a colorized and modified image, V0015901, from the WellcomeCollection.org, a book and image archive with a large collection of public domain images.

In this episode, the Eternal Jew and his wife Batkol entertain a visitor.

The haggard crones, they sits at their doors, knittin’ and sewin’ and eyin’ their carts, and earnin’ at most a coin or two the live-long day, along our souk.

On such a day at the raisin cart, that ancient matron, that toothless one, who must have come to Jerusalem as a new-born babe in her mother’s arms followin’ the Arab armies west three or four hundred years ago; her whiskery chin and sunken cheek, her wheezy breath and croaky voice, that trembly, wrinkled claw of a hand that scoops your raisins and clutches your coin; one day the end of her days come.

Nary a word; nary a tear. Just gone. And not a day gone by and there on her stool an ape of a man. Hard to say the last time his hair felt a scissor’s edge or the froth of soap. With a bulgin’ belly and an ass so wide it drooped off either side of her stool.

Strange to see that lunk in her place sellin’ old fruit. That’s woman’s work. He don’t drool or yammer and moan like an idiot son; and his eyes ain’t dull and his shoulders limp like them criminals, the life beat out of them in jail. He sets there whittlin’ pieces of wood all the day long, and a scowl of a face.

Some days later as I leave my room I seen a woman at the head of our souk. Mornin’ gloom on another day and all my thoughts are how to survive the fumin’ bellows, spray and spark as I reforge Bouillon’s misshapen thoughts into reasonable laws that might stand awhile.

As I walk out into the wider street I hear that woman cryin’ and wailin’,
“Where’s my momma? This is her house.”
Neighbors stick their heads out doors or throw open shutters from upper floors, and then I’m gone, late for court which Bouillon begins by prime* each morn.
* Christian mornin’ prayers, about 6am

Late afternoon I’m dismissed from court early, but weary, as every day. Home, to a quiet and studious house but today Batkol is a boilin’ pot –
“The old lady’s dead; she’s been murdered and robbed…”
“Hold on; hold on. I don’t understand. Who would kill such a one as her, so old, the dogs don’t bark at her, and poor as an outcast bedouin.”

“That’s the question we all are askin’. Everyone’s talkin’ but no one knows why she was killed. Just after you left for the court today a woman appeared, and fretful and tearful and rueful she were, a-claimin’ her mother can’t be found, and her door is locked as never it were and bloody murder and on and on. Til a watchman was finally roused from his bed, him amblin’ along scratchin’ his beard. He listened with many a ‘tut-tut’ and ‘hmm’ and ‘are you sure?’ and ‘not likely, mum’, til finally the daughter prevails on him, and a smith is called with hammer and rod and they breaks the lock and enters the house, and there’s the old lady, like a chicken bone broke in two in the larder pit under a couple of bedouin rugs. And that ape of a man these many days we seen a-squat by her raisin cart, he’s gone, and no one knows who he be.”

Well, we chattered and ate and pondered some more til the room grew dim, and dimmer, and dark and the narrow window that lit our room only served to let mosquiters in.

The matins* bells. The laud** bells. A rooster crows, then first light. And I hears a creak like a slow swingin’ door. Batkol sits up, like to use the pot, but she whispers, “I hear footsteps in here.”
* around midnight; ** around 3am

I listens. Be there someone in here? A creak, a swish. I rolls off the mat, feels for the candlestick, slowly rise. Shadows and sounds. Which ones are real? Loud I demand, “Who’s in here?”

Shuffle and scrapin’ of a stool that’s been kicked, then a rush, and a shadow flies through the door. I dive to the side. Crash on the wall. Gruntin’ and growls, the glint of a blade as it flashes and sweeps, just a hair from my face. I stumble back through the doorway and fall, then grabs the table to block the door. Where’s Batkol? Then that giant man bursts through the table. Splinters fly. I hide in a corner, low to the ground tryin’ to feel for a stool or bench.

Quiet. Each of us searchin’ the black for a shape or a shadowy movin’ form. Then Batkol screams, ‘Murder! Help!’ She’s in the bedroom; he makes a rush back through the door, trips on a hunk of the broken table and flies through the air. We hear the smash as he hits the wall.

Groans, growls. Like a furious bear he lumbers back to the room I’m in. Chairs, pieces of table, stools fly as he kicks around the room.

I sees him lumber direct towards me. He raises his blade; then a shadowy blur and a heavy thump and he crumbles and falls. And another thump.

Batkol hisses. And another thump with her cast iron pan. All we hear is a gurglin’ breath and a horrid gag.

More shouts, this time out in the souk. Neighbors screamin’. The watchman’s reply, a torch in his hand as he bangs on our door. Then a rush up the stairs and into our flat. Behind him every able-armed man and woman livin’ at our alley’s end.

There on our floor that lunk of a man, goggle-eyed, gaspin’ in a pool of blood, his hands twichin’, movin’ his legs slow and trembly, as if tryin’ to stand.

A child is sent to the hospital for knights and soldiers. What a long wait til they finally come and drag him away, him moanin’ and mumblin’ and howlin’ in pain.

Three of the knights remain in the souk demandin’ a full accountin’ of events. Over and again they want us to tell who we are and what we seen and what we done and why this man wanted to break into our flat. And where is our gold and why are us Jews breakin’ the law and livin’ here.

Bad as these inquisitors are, I dread the moment they tire of this and I must appear at Bouillon’s court, him who, no doubt, sent that thug to end his long endurance of me.

Then lackies arrive.
“Where’s that Jew? The king demands his face in court.”
Batkol reaches out and touches my hand, as they march me to the lion’s den. And should I return, will she still be here?

In the next episode, the gallows built.