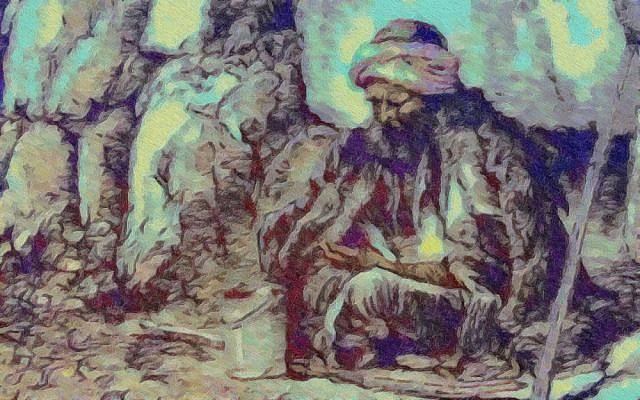 In this episode our hero thinks, ‘Wouldn’t it be nice to take a trip out of town.’

Bouillon’s fury knows no bounds when I enter flanked by his armed guards.
“Jew, I’ll have you locked and chained the next time you arrive late.”
I stares at him to read his face…. All the lies, the twisted facts, the mindless hopes and useless fears, the ways he stretches grains of sand into cornerstones of fact and truth, and disregards the persistent waves that batter mountains into sand. And down inside them twisted thoughts his fears and shames and angry prides all play little rhapsodies, and like a breeze that blows a flag, his thoughts a-flutter in the wind. And further down the feeling scales the titan shades and outlaw gods usin’ him to wage their wars against the law of Adonai.

All of that is intermixed with clever wiles and honest concerns, a sharp wit that judges well and judges quick, and sometimes is kind. In short, a much aspirin’ man, and in his face I see no lie. That assassin wasn’t sent by him.

“It seems, my lord, you haven’t heard. A murderer broke into my home and tried to kill Batkol and me. The Templars refused to let me go, suspectin’ I was the guilty one, until your envoys came for me and pulled me from their savage claws.”

Now Bouillon turns his furious eye around his court, and one by one weighs their trust and loyalty, and who is ruthless, who is sly and who may be plotting to take his crown. Long the silence. Long the trial.
“Soldiers, bring the assassin here!”
More the wait and more the sweat as plotters watch the gallows being built.

“Your name!”
“Khrish.”
“Say again!”
“Fritz, your honor,” a guard responds. “A soldier from Mainz. He marched and fought these many years with Willem’s men.”

Bouillon sees there’s little gain in questioning the prisoner until he heals enough to talk.
“Keep him in chains and guard him well and treat his wounds. And in a week we’ll find out who filled his purse.”

I come home. Shekhina’s wings were spread above Batkol, who sat a-floor like a mourner, slouched, dull with grief, each of us afraid to hope the other was alive. Then both of us says, as if one voice, the breath of us,
“*Blessed the Lor that revives the dead.*”
*-* from the 2nd blessing of the Sh’monah Esray, the 18 blessings recited 3 times a day.

Right then Batkol and me resolve: knives are sharped. Time to leave.

Early morn. The guards arrive at Jaffa gate. Slide the bolts and put their shoulders to the doors. Creak and squeal, and out we slip among the gathered crowd of folk: pilgrims, venders, farmer serfs, a troop of knights, a dozen goats, a wild eyed madman full of gods, a loincloth all the clothes he wears, declarin’ time is near its end.

Once again I’m fleein’ Jerusalem. First time, escapin’ the Roman wolves; this time fleein’ its bastard child. That time sleepin’ in a fox’s den; this time even the fox has fled.

Piled and compiled the evidence that God has cast this world from His Heart and left the beast, flesh and blood, us, once God’s hands and eyes, now thrashin’ in the muck, blindly, unabashed, to build on the sands of our violent shores, stormy, drunk, and full of ourselves til the tides have undermined all our works, til the waves have eroded us into sand, breakin’ our genome* into shards.
* Please excuse the anachronism for the sake of accuracy.

In the Upper Worlds our long descent might look like little more than this: God washes His hands, shakes them thrice, says a blessing, dries them, and we are gone.

I ain’t the first, nor close to the last to wonder if God still lives in this world, or why God would live here, hidden, obscure. Our fathers and mothers wondered the same, Rivkah*, Naomi**, Habakkuk, Job.
* Rebecca; midrash on Berraysheet/Genesis 25:22; ** Ruth, 1:20-21

Then the Greeks picked it up and made it the rock us builders rejected, their cornerstone. Later I learned in lands to the east, in Hind* and Shin** they’re askin’ that too, in the Bhagavad Gita and some Analects,
‘How can sin endure before God?’
The Hindus answer, like Sufis and Jews, that the Soul is passin’ through many a life as it seeks purity or descends in sin. And the Chinese agree with our Khazal*** who declare, ‘They who know virtue are few.’ Removin’ God from the equation, they say it is us that creates injustice and sin and it is for us to make repair.
* India; ** China; *** Hebrew sages of the Talmud

Them my thoughts. This my say…
“What is our sin?” I complain at Batkol. “Is God still angered this thousand years?”
But she has little regard for such blab.
“What? Are you the judge of God? Cut the talk. Pick up the pace.”
Long time we walk with nary a word, just the wailin’ winds over droughted earth.

We figures, Bouillon will send his men to lash me back into his court, so we turn off road, north then east intent on findin’ the River Jordan, and walkin’ it up to Tiveria.* The rocks weep tears in the sun’s cruel stare. The dust, bowed before the merciless king, cries out beneath our feet,
“Leave me alone; don’t step on my neck as I lie in penance on this unmarked grave.”
* Tiberias

An ancient woman with a babe in arms — a heap of rags and dust and scars — squats in a wadi pickin’ weeds. A wod in her mouth; the infant screams.

Brackish muddy water in a pool is all we finds to drink that day, and drink we must, and drink I do. And better it were, not to have drunk. And still we force our way through the hills. The sun an assassin behind our backs, as if it been servin’ Bouillon’s ends, shootin’ its fiery arrows at us when we step from the shade into its sight.

Late in the day and come to the peak of a hill. Below us, Jericho.

In the next episode our dynamic duo becomes spies.