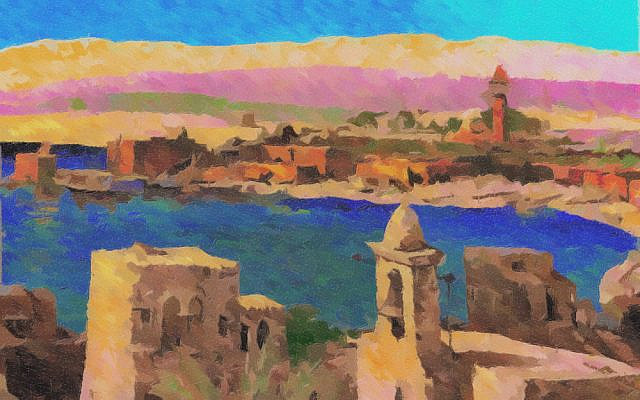 In this episode a little fishing trip…

Walkin’ the river for seven days. Summer, like an oven, bakin’ the land. But figs and wild grapes thrive by the banks, and the cool waters and muddy shore refresh our heads and ease our feet. I even caught a fish one day while the women rested in the willow shade. Makin’ a fire in a shallow pit — a sweet savor the grillin’ flame, incense of balsam mixed with fish — our bellies rumble and our tongues grow moist, but in our mouths, mostly bone and fin.

And then behold! The lake itself, Kinneret, its ripples sparkle and dance, and the sun sits hangin’ over the town as if to point the way to us.

There as we walk along the shore a fishermen heavin’ on his weighty nets. We rush to help him, splish and splash, and together we haul his catch to the shore.
“Thank ye, strangers. Ever so kind, when the work is hardest, to offer a hand.”
“Hey, it seemed the net was callin’ us. *When the lion roars, who will not listen?*”
*-* Amos 3:8

He catches my mis-quote and laughs a grunt.
“Seems you’re a man who has learned a book. Off to Damascus or Byzantium?”
“A bow-shot away is enough for us. We hear Tiveria has sagely folk, with a handful of wisdom to serve the Lor, and maybe some kindness for strangers and friends. For us, it’s enough to busy our hands and find a place where the knights ain’t cruel.”

“Where the nights ain’t cruel?”
He weighs my mean.
“A troubled night is a thing to avoid, like an angry Mamluk or a god-full pagan. Sorrows before them and sorrows behind.”
Then he smiles and flips the meaning again:
“Tiveria ain’t as important as that, so them desperate knights ain’t trampled this place.

“But time’s a-pressin’. These fish will turn foul unless I sell them or let them go. Help me drag this over-full net to the dock, and I’ll give you a share in it. Usually I just catch a few fish. God sent me abundance; this catch and you. But forgive me. I ain’t introduced myself. My name’s Gideon. What be yours?”

God rains* and our thirst is sated! But little we know what good fortune weighs. That net become a Leviathan, a-draggin’ on us, as we dragged it. Stumble and fumble along the shore sometime up to our thighs in muck, sometime face down into the drink, trippin’ on branches or on the net or over each other like some farcical play.
* others say: ‘reigns’

About time for Minkhah* we reached the dock, soaked; our clothes like a second skin, like some Greek statues, shamelessly nude. Except that we was splattered and drippin’ mud.
* Afternoon prayers, usually not long before sunset

Expectin’ a raucous crowd to form, and heckle or stone Batkol and Rakhov, but instead, some women rush down the beach with dry garments to drape on them.
“We seen you’s strugglin’ with the heavy net, and as we just finished washin’ clothes, all clean and dry and folded nice, and thought you women was a tad exposed. Don’t mean to disrespect you none, but allow us to take you back to our house so’s you can wash and comb your hair. Them cotton skirts will dry right soon while we share a cup and a crust of bread. Gideon, you and your helper there, join us soon as your work be done. Glowin’ coals will be waitin’ on you’s.”

Ain’t no argument come from us. As the women climb the stone quay, I says to Gideon,
“You know them two?”
“I knows about everyone here in town. Them’s our neighbors. Our children play. Their place is just down the street from mine.”
And then he turns and gets to work.

“Git me a sledge and four long poles and a length of line for five or six loops.”
And he points to a shed high up on the shore. I runs to the shed. The smell of nets — fish and mud and algae and tar. Among the tools I find the sledge and some poles heaped at the far wall.

He takes a stake and snappity clap, slips it through loops in the net all around. Then heaves the stake into the silt and the net’s secure with its catch of fish. Then he wades in the water up to is chest and pushin’ a pole down in the muck, jumps and grabs and hangs on it, drivin’ it deeper til it’s firmly set. Now he does the same with two more poles. He calls me now and we drag the net to deeper waters beyond his poles. Again and again he jumps and loops the net on the further stakes he set.
“Now throw me the line.”
Into the net he weaves it, knots it, pulls it tight to close up the net like a giant’s purse. Then he stretches the line back to shore, yanks out the stake he originally set and pounds it in up the beach. And to this he ties the line secure.
“Done! Tomorrow we’ll sell them fish.”
“Won’t no one take them during the night?”
“This be Tiveria, not Athens or Rome.”
That’s all he says as he rushes up shore.

He’s almost runnin’ as the shadows stretch in long fingers, pointin’ at us, like to ask:
“Where’s your holy house? Happy is the one who dwells in it!”
Turns here, turns there, down a crooked lane and into what looks like a tavern door. There, a collection of rough-hewn men are gathered around a rough-hewn bench. One of them pounds the bench with is fist and growls, ‘Alright,’ when Gideon bursts in.

‘A gang of thugs plannin’ no good,’ I think, as they stand to greet Gideon. Then like a mellow and deep toned flute he bows and begins to sing a song. Hebrew it were, the Great Hallel* and followin’ that, as the gang all stands, with words I’ve heard manys the time, Isaiah or Ezra, I’m not sure which.
“*Stand up and bless the Lor our God, from everlasting to ever lasting. Blessed be Thy glorious Name above all*.”
And me, I’m rockin’ into the tropes of a Minkhah** such as I’ve never heard, by a band of brothers like I’ve never known.
* Ps 136; *-* Nekhemiah 9:5;
** afternoon prayers, correspondin’ to afternoon sacrifices in Temple times

In the next episode, a rude awakening.