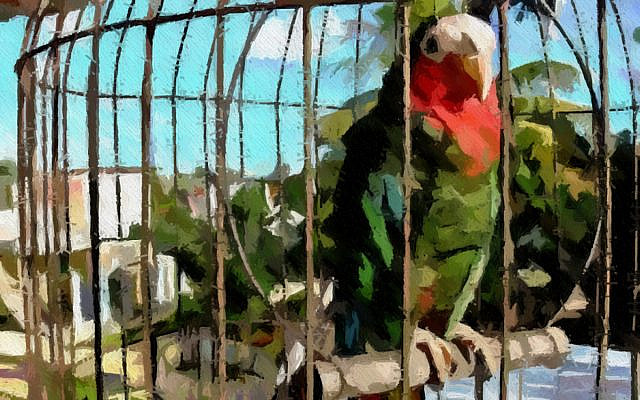 Ethop the Parrot, image colorized and modified by the author, from the public domain source Wikimedia.

In this episode we meet the real Aesop. Well, we don’t know who the real Aesop is, but research suggests that the “Aesop” character we know is very likely a composite, and one of his primary personas may have been Ethiopian (‘Aesop’ from ‘Ethop’). From there it’s not a far reach to imagine the following.

…I was speakin’ of times when the Lor come near to touch the world, to stir the soup, as you might say. And excitable us, we spill the pot as we ladle it up. You can just imagine God’s angel corps, exasperated and shakin’ their heads or suppressin’ a laugh and ‘whaddidya expect?’ or them sentimental ones holdin’ back tears. And the Lor corrects them in a simple Word,
“They live in time; they’ll slowly learn. Worry not. My gradients incline them towards a better way.”

Anyways, in a similar vein not so long after Yehudah the messiah come and gone, and here we are, still the same…

A chill spring day, drizzle and mist, the sun sometimes slicin’ through the clouds, me on the road along the coast where barley sprouts, a most tender green, a-glisten with beads of tender rain. I’m headed down to visit a friend, Rabbi Meir*. He has a fine home cut in a rock that juts from a hill. It’s a quiet place by a gurgly spring, not well known, so the rav ain’t disturbed by too many crackpots and too many woes. I come here often to talk to the rav and get his advise, though dim my hearing. ‘Course, his voice ain’t so clear, him long since dead and lookin’ down from the sapphire palace on the other side, where the truth is unfolded, future and past.
* pronounced ‘Mi-eer’

On such a day I approached his tomb. A wild dog sat there, bark and growl. But as I got near, not a dog at all, but a man with a wild frock of hair. Stories be flyin’ out of his mouth like bats from a cave in the thickening dusk, a dusk that had settled into his skin. Prob’ly a pilgrim from Ethiopia. But why is he a-squat at Meir’s grave and not at Bet Lekhem* or the Sepulcher?
* Hebrew name of Bethlehem

Polite-like I says,
“What’s the news from the higher worlds that the Rav conveys, workin’ you into such an animate state?”
“*It’s the same story the wolf told me; it’s the only one he knows…*” and sudden-like he clams up tight, lookin’ at me like I’m an evil sprite descendin’ out of the drizzly wind.
*-* Grateful Dead, “Uncle John’s Band”

We stands there poised like two wary dogs sniffin’ the air; is it fright* or friend?
“You puts the wrong mask on me,” says he. “I’m not a croc comes up the Nile from Ethiope to worship the sun that set behind Golgotha hill. I’m a parrot flyin’ from Libya on eagle’s wings to the eagle’s nest.”
* others say: fight

“You sail from Tripoli to here?”
“A madman’s question,” he replies. “Ain’t no ship that sail on land; even a country mouse know that. No. The Fatimid captures me, searchin’ for rebels in Tripoli. Wantin’ to make me a eunuch man so I could serve dainty in the woman court. But a Frankish embassy bought me whole, batter and beat, but with all my parts. They sails me up to Sacily and on to Venis to serve some prince. Well, a secret Jew holp me escape. A savior and knave. Mostly a knave.”
“Sounds like an upright man to me!”

“Well, what do you know of the like of him? He chaunt a spell and make me eat a nutty flavors ball of tar. And when I opens my eye again I’m a parrot cramped in a gildy cage in some dark and tiny stinky room. Aghast, I shouts a furious oath but squawk and screech is all that comes out. How slow I learnt to talk again.

“A fascination! Tell me more.”

“His name were Lev. In them dreary days he teached me Latin, the Lor’s prayer, then takes me churchin’. We stand outside and he feed me a seed to recite my verse. Then pass his hat and collect coin.

“But back in his room, mornin’ and night I hears him chaunt his strange talk, over and over. After awhile I learns this too, and I squawk it out.
‘A marvel! A Jewish parrot,’ he say.
“When I knows the Sh’ma* and can bless some foods he take me to a synagogue one weekday morn at the broke of day.
* the most basic and well known profession of faith

“Expectin’ seed to squawk my prayer and then him pleadin’ and passin’ hat. But no. He nary say a word and he’s hushin’ me,
‘Just wait, just wait.’
“A worrisome look is his eye.

“Ruckus and hubbub as each man pray. Now and then some harmony cut the pandemonians; and then a hush as a tiny man, stoopy and slow, with a snowy beard a-tangle to his chest make his way to the center of the room. Soft and croaky he talk awhile, with an amen here and an amen there, here an aah, there a moan, everywhere an amen. And now they gathers for wine and bread.

“And up steps Lev with me in hand, actin’ a little tipsy and loose.
‘Gentlemen, hold off kiddush* a touch. This here bird is really a Jew, and he knows the brakhot** as you or me. Ease his Soul. Let him say Kiddush, or Motzi.*** Increase his joy.’
* blessing over wine; ** Hebrew: blessings; *** blessing over bread

“Well, what a he-haw this stirn up, with ‘nary a way’ and ‘shaw and foo’ and much the hubbub as Lev stands firm, declarin’ the ways of the world are strange. He twist them and work them and finally say,
‘I’ll wager you all. Put your moneys down.’
“Well, a couple of small coin get thrown in his hat with whispery words like, ‘ya never knows,’ yet Lev can’t cajole out more than that. But a coin or two is better than none, so he put his matchin’ coin in the hat and declare at me,
‘Bless the bread.’
“I sits there and flutter my wings a bit but say nary word. He look at me and louder he say,
‘Bless the bread.’
“I turn my head this way as that, and a bit of a creak come out of my beak and nothin’ more.
‘Oh, I forgot,’
“he explain, and get his purse and throw a seed into my cage. Well, that make me sing! Squawk and caw just like any parrot is want to do. Chuckle and snigger and ‘whaddid I say’ from that *treacher of men*.
*-* group metaphor, as in ‘murder of crows’

“Now all red-face Lev shouts at me one more times,
‘Bless the bread you stinkin’ bird.’
“And me, I cocks my head a bit like I can’t imagine what he want from me.

“Empty hat, we walks away. He turn a corner to a quiet street and there he open the door of my cage and grab my neck, like to choke me dead, screamin’ words I shan’t repeat. Then he thrown me back in that stinky cage.

“Walkin’ home he begin to calm down. His pace slows. He start to talk with himself the way he often do. That’s when I say,
‘You don’t understand. Imagine tomorrow what they’ll put in the hat.’
“He look at me, eyes wide as bowls and burst out laughin’ and slap his knee, him chirpin’ and skippin’ all the ways home.”

Next episode: attending a conference.