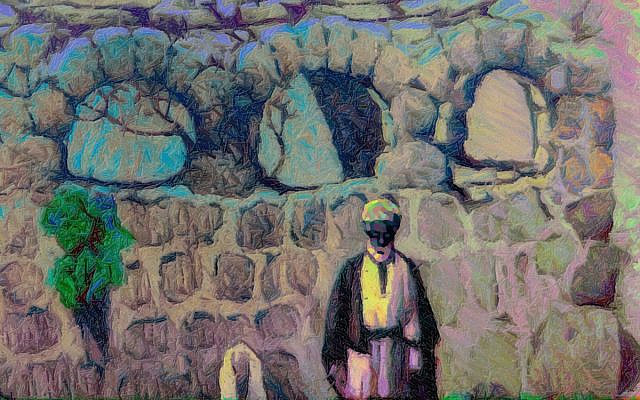 In this episode our parrot-friend learns how to fly again.

… “You don’t understand. Imagine tomorrow what they’ll put in the hat….”

And there this dark skin pilgrim stops and turns to Meir with many a bow and the strangest talk I can’t never describe, yippin’ and gurgles and growlin’ away, mad as a mystic in the spell of the moon. Then he stops and turns and sits there awhile with a grin on his chops and a far-away eye.

“Well, tell me the end!” I finally cries out. “What happened when you went back the next day?”
Without the slightest change on his face he slides back into his lunatic tale.

“Oh, so many pandemonians that night as I perched in the branches of dreamy sleep. A raven fluttert into our room and says,
‘Come. You are called to a conference*!’
“A-startle, I say, ‘And what of this cage?’
‘Lift your wings and be not afeared.’
“And he hops along a table top and onto the sill and into the night. So I grit me beak and flap me wing and here I am, lookin’ down on the dark city and its darker canals. Far we flies through the night and day to the River of Immortality.
* See Attar of Nishapur’s partial coverage of this event

“There gathers on the farther shore princes of all the nanimal clan. I dwells there many a long day and night seekin’ help to unbind the spell that knots me in a parrot shell.

“I dances me thanks and sings me farewells to friend and family, serpent and dov. Then, night as day I wings me way back to me body and me feathery cage.

“Mornin’ comes and here come Lev. Mambo jambo alakazzam. He’s in the cage and I’m on the lam!

“With a changeling body and a Jewish mind and a Kohen* spirit and a parrot soul, I make me way to Jerusalem. ‘*Ki meetzeyone taetsay Torah u’davar Adonai mi Yerushalayim.*’ Yea, the Lor is callin’ His people back but no one is hears without nanimal ears.”
* Hebrew: priest
*-* “Because Torah emerges from Zion and the word of the Lor from Jerusalem.”

Libyan sage, madman, or fool. I stands here, my mouth open wide, flabbergasted like a kid at a fair and amused like he’s some jester jugglin’ eggs, and annoyed at myself for bein’ so tranced and a tiny bit curious to test his claim that he knows the language of animals.

Oh, and I should make this editor’s note: he didn’t say this all in one spout. I put it together like broken shards, gathered it up and glued it all with missing chips and glopped in glue to fill the gaps and make it hold, and maybe make some sense to you’s.

Well, maybe he’s a parrot, or a holy man or a con man workin’ a strange act; maybe he’s inspired or maybe mad, but a stranger for sure, and probably a Jew, so its my duty to invite him home.

We walks through the door of our little hut and there’s Batkol, needle and thread, bindin’ signatures* and hummin’ a tune. He cocks his head like a puzzled dog, then with clickin’ clucks like a raven will do he sing along til she stops her hummin’ and looks him up with a squintin’ frown. He stops and pouts, and stares right back, like a dog again, juttin’ his head, sniffin’ the air, is it mount or bite, and her like a woman weary and annoyed.
“Another strange bird my man’s brung home.”
* bookbinding work

“Ah ha! That fox there, she know who I am, that I be a bird in the shell of a man. Wait now; wait now; can this be? Her eye can see; her heavenly voice. I recognize now. *She’s the one what stole me heart from me*, and there I lay, a soulless body, dead. And then she returns it back to me, raises the dead, and more than that. I weren’t a parrot no more but a guily wolf, prowlful by night and guilt-rid by day, a shifty eye and toothy wolf. Oh the world look so differnt then siftin’ through ancient wolf tales, tales of guile, tales of shame, tales of runnin’ like the gusty wind, and tales of slinkin’ from terrible men.
*-* She’s the One, Chartbusters

“And here she come; and again stole me heart, and oh, the grievyous pain of death in life, as if a giant stone is fell on me chest and crusht on me. And then again she restore me heart, and here I am a flap-wing crow full of clever shaman talks, me heart a-swirl in crowful tales of kidnap chicks, tricks and lies, and cawwin’ song to raise the moon, and messenger of the healin’ herb. The Book of Crow is writ in me and all the world conforms to it.

“And yet again me heart tore out, and yet again I’m flay by death, and re-incarnate yet again, again transmigratin’ back to life, this time a lightning thrashin’ crocodile, one eye above the water line, one below. I seen all things. Me tales are sharp and toothy ones, driftin’ down the languid Nile or meditatin’ in the reed.

“Your woman fox did that to me. Taught me how to shift me shape on me night journey to the farther shore.”
And there’s Bukoel, faint the smile; amused, or does she recognize him? She simply says,
“It’s time to eat.”

Dinner. Peckin’ at his fava and rice he seems distressed, groan and grunt, or hoarse and low, ‘what now , what now.’ What to say to a troubled soul? A word to dispel anxiety? I don’t know such spells and charms. But it seems my bride is a cloud-ridin’ geist, (mystery woman I thought I knew).

“We have all descended from the hearth of the Lor, that place within our burning selves, with a message coded in the blood of us, but most people just don’t know how to hear. Looks to me like you’re hearin’ a crowd of four or five orders of message streams. Can you translate for us what you’re hearin’ right now?”

He looks like a drownin’ child in the surf but his eyes seem to say, ‘Hold me hand.’ Batkol leads him, shaky, up to the roof.
“The evening breeze will cool the air.” And we sit with him while his storm passes through.

Some days he’s able to walk about so we make pilgrimage to Meir’s tomb and there he seems to find some peace. The rav knows how to calm the tides that drag him into the poundin’ surf.

One mornin’ sippin’ some rosemary tea and crunchin’ on pita, crispy fried, he sighs and wearily starts a tale.

And if you can wait a week, you’ll be among the first people in the world to be privy to it!