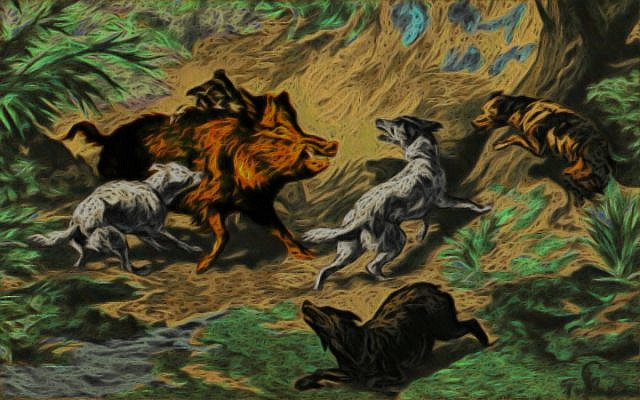 Dogs Attacking a Wild Boar; image colorized and modified by the author, from the public domain book Eine Orientreise vom Jahre 1881, published 1885 and digitized by Google, in the public domain.

In this episode our wanderers arrive in Homs.

The sun burns a rift thru the charcoal sky and shades of the spice bazaar tint the dawn, and it washes our feelings in joyous release. Freedom of the road for a moment. Unyoked from furrowed fields and clods of clay and the backsides of mangy goats.

From afar a horn sounds and resounds. Hunters emerge from a willowy copse, runners behind them with banners on poles, and behind them servants with drippin’ knives, for tearin’ out arrows and cuttin’ necks.

I turns to Batkol to assess her face, worried the throat-slittin’ hunters recall the slaughters we seen that might stir up her soul. She knows the intent of my look, and says,
“A moment ago the world seemed so light and our way so open, and goodness prevailed. Sudden, this way is an exile’s road. The hunter pursues, and Death, he’s amused. Tell me Saadia; maybe you know why men have a love of blood on their hands.”
And this our mood til we come to Homs, that city of refuge, a fortified place.

Tucked behind a tinners’ shuk we finds a Jewish house of prayer. They welcomes us like emissaries sent by King David himself. Songs, prayer, feastin’ and psalm, composin’ and recitin’ verses and tales, eatin’ sweets; more prayers and song, a quick doze and time for Shakhrit. As if this was Jerusalem restored, and we, the celebrants.
* mornin’ prayer

Such our redemption and our joys when exiled Israel returns as one to the Lor who dwells within and dwells with all, ignitin’ our souls. God sings the Song, and us the Voice — fusions, harmonies, tikkuns* ripple thru the broken worlds.
* Hebrew: world repairs

Someone just loaned me this strange Greek book, Odyssey it’s called, odyssey its theme. It says,
“Your tale is much like this: a-wander and a-wonder all about.”
So I sits down and reads; the verses lappin’ over my feet and on up to my ears. And the first thing I thinks, maybe its odd, how a soul is addressed by another soul, how a person is connected to the Lor:
‘Son of Laertes, seed of Zeus.’
And I’m thinkin’, ‘how might it be with me in days to come when I am recalled?’ But I am not such a son of man but a son of your soul seeded in the Lor, and if you ain’t hearin’ the Lor in you, maybe, at least, you’re hearin’ me. Yea, the Lor sleeps in the soul of us all, which we must awake to hear the call. But if you hear me, that’s somethin’, at least.

Shabbat and readin’ Devarim* today, and after prayers, at the festive meal the rabbi asks me to say a word, since he thinks me wise, a traveler of worlds. First impressions. But still I speak, and this the intention of what I say (tho I’ve modrenized the concepts some):
*Beginning of fifth book of Torah

How a mission been lain in the soul of us. (Us Jews I’m talkin’, but that don’t mean if you ain’t a Jew you’re missionless. Maybe your people have special hearin’, unique teachings, or a version of our Lor that’s true and good and yours to tell. I’m just tellin’ what’s lain in us Jews.) Call it a Voice or call it a Song, call it a gene, twisty and long. Now you modren folk, you’re shakin’ your head,
“Ain’t no Lor twistin’ in you; ain’t no gene as makes you a Jew.”

Fact-bound you are, and fact-bound right. I’m tolerably aware of fact-bound folks. But the facts you have are crooked and few, so don’t go judgin’ like you’re the sum of God. Atoms don’t have life in them; your genes ain’t the strands that create life. They’re just the portals for the soul to take on livin’ shapes in this world. Divine it is and as much of it as you reveal, that’s how much the Lor is *livin’ into you.*
*-* others say: flowin’ out of you

Mankine. Much of us is kine and yet when we express the Lor we be connectin’ heaven to earth, we be connectin’ Adam with God, we be the gene that expresses the Soul. And that’s the strand us Jews reveal, and we pray it into the womb of you. Our prayers wrinkle* and harrow your earth, like to plow and spread the divine seed; we tend your shoots to improve the yield, and our tithe: we give justice to the Lor. Anyone can do that if they want, but that’s what we Jews been chosen for.
* others say: rankle

We been drivin’ that plow a long time, tryin’ to hear that Song of the Lor lain* in the very ground of us! Aberham begun to hear it right, and Moshe, he picked up a quill to write it down, to spread it around, to teach us how to hear it too. Some say he heard it perfectly. I don’t think so. Seems to me, his was the first word, not the last. Brilliant it be, that’s for sure, but now its on us to reform and refine, to hear deeper and see beyond the narrow constraints and false beliefs that shaped his long-gone world of thought.
* others say: leined

Let one example suffice for now: it weren’t for us to eliminate the Canaanites and all them tribes. That’s God-work, not for us Jews. Moshe got that all wrong. And in the end it weren’t us Jews that brung on the end of the Canaanites. Iskender and his Hellenists washed away all them folk, not with their swords but with their ways, their clothes and foods, their arts and laws, without malice, without intent. That’s God-work, hidden, clean. A sword? That’s a tool for apes.

So here I be in your modren world writin’ this book, tryin’ to hear that deeper Word wove into our genes. Them as hears it better than me, pick up your pen and get to work! Don’t wait for me to get it right!

And them as serve them demon gods that still rebel against Adonai… angers and hatreds will eat you up til nothin’ be left, your hearts mauled. The creative life, the strength to build, the strength to respect, the strength to be kind has been eaten up, heart and soul. A vomit of hatred drools from your mouth. Your hands flail, your feet sink into ruins without and ruins within. You say,
“Our sword, for the glory of our god,”
Your god be molokh, dead and gone. Gripped by demons that frenzy your soul, you madly rush to destroy yourselves.

Them was my thoughts on that Shabbat, at that festive meal in that house of prayer in an alley in Homs. And twisted around it other thoughts, related thoughts on Divine Justice, the eleventh prayer of the Sh’moneh Esray that’s mappin’ our ways.

Guess I should add, I didn’t make no friends or admirers with that talk. It took another six hunnert years til clergy and kings might tolerate questionin’ the bible’s truth. (And in many a nation this still holds true: woe be to them who repudiate holy writ or a prophet’s name.)

In the next episode, talking idols and cut-throat guides.

About the Author
I am a writer, educator, artist, and artisan. My poetry is devoted to composing long narrative poems that explore the clash between the real and the ideal, in the lives of historical figures and people I have known. Some of the titles of my books are: The Song uv Elmallahz Kumming A Pilgimmage tu Jerusalem The Pardaes Dokkumen The Atternen Juez Talen You can listen to podcasts of my Eternal Jew posts on my personal blog, Textures and Shadows, which can be found on my website, or directly, at: http://steveberer.com/work-in-progress. I live with my bashert just outside Washington, DC, and have two remarkable sons, the three of whom light my life.
Related Topics
Related Posts
Stephen Berer