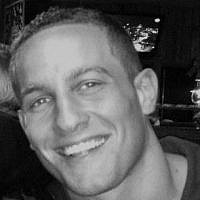 The Blogs
Ari Hoffman
Apply for a Blog
Please note that the posts on The Blogs are contributed by third parties. The opinions, facts and any media content in them are presented solely by the authors, and neither The Times of Israel nor its partners assume any responsibility for them. Please contact us in case of abuse. In case of abuse,
Report this post.

What is the solution to the Israeli/Palestinian issue? How is it that we can procure peace with the Palestinians? The current tide has rendered the dream of peace between the two sides virtually impossible. But the lack of peace is not the sole threat to Israel; a conflict less bloody but just as critical spreads across the world on Universities. Society blames Israel for the lack of progress in the peace process. Faulting her has promulgated hate towards the state, regardless of Palestinian culpability in its failure. This hatred perpetuated on college campuses, like a cancer spreading through the body, is direct result of the failure of this process.

Thus far, some of the most elite scholars and statesmen since political Zionism started have failed to solve this issue. Israel has offered peace to the Palestinians at every turn, and has made her fair share of concession since this issue commenced. Unfortunately, this has meant nothing to foreign bodies, and the international community as a whole.

As exhausting the disregard of such peace offerings have been, it is equally exhausting to witness the inundation of said ignorance by our community (due to the lack of any effect it has). Countless individuals show direct representation of this in their continued hate against Israel. Thus,It is time we shift focus from reactionary defense of Israel with stated facts, to pro-active measures aimed at garnering support for her.

It is apparent that nobody cares what we have done to promote peace. No matter the scenario, Palestinians always seem to be absolved of wrong doings when a conflict arises. Said scenarios are continuously followed by blame being disproportionately placed on Israel. This begs to question the effectiveness of current pro-Israel advocacy techniques.

We see the cultivation of such ignorance culminating on Universities all over the United States and in Europe as well. Just as the international foreign bodies ignore it, so does generation of students and potential future leaders of the world. Something needs to change. We must explore other options in defending Israel on campus and in the international community. Although refuting false statements and allegations are extremely important in our defense of Israel, it must no longer be our bread and butter to read off fact sheets. It is time we make Israel relevant to all students on campus and people of the world. Inspire love/relations with Israel by creating associations for the individual student with Israel itself. The essence of Zionism is not appealing to all students. The notion of the self-determination for the Jewish people in their historic homeland mantra may not be the “it”-Factor producing goose bumps for most individuals as it does for students such as myself.

As such, it is beyond truth that this mantra is the very heart of Zionism appealing to individuals like myself, but it is the arteries branching away from that heart that will bring the international community in support of Israel. The results (arteries) of Zionism are shown through the various advancements and innovations produced by Israel in all sectors of contemporary life. We should provide students opportunities to benefit from these advancements. Resist the urge to remind him or her that without Israel they would have no phone or computer (etc), but rather concrete and legitimate experiences that benefit them. Our society is selfish, almost always looking for their sole benefit in something. Providing society with just that may be the way to make Israel relevant to them.

Articulating a new approach to activism in which we should not just focus on providing facts to students. Curtail their interests and inspire them to learn those facts on their own should they be faced with questions or concerns. Bring these young minds to Silicone Wadi, to the beautiful and unforgettable nights in Tel Aviv, the aura of Jerusalem, the beauty of the Negev, and more. I am not just talking about a birthright trip; I am talking about producing convenient and easy exchange programs for students to learn in Israel, collaborate with Israeli companies to offer internships and different Israeli experiences for these students.

It is not just about feeding the same Zionist dream to the already won-over Zionist, but rather engulfing the minds of a regular college student to see the beauty of Israel, and the benefits of its establishment. Make it a reality to students, not just something they see from the pro-Israel group on their campus as they walk by their table. Allow the everyday students, who normally will not care much for Israel, to have an experience and a reason to stand up for her. Some will be inspired and get active, others may just take advantage of the opportunities, but all will have a positive association with Israel instilled in them. The association will be forever a part of their soul, spreading like wildfire the beauty and truths of Israel. This hope will overwhelm the anti-Israel groups and minimize their verbal attacks, reinforcing the support system for Israel. It is time for a change in pro-Israel activism, and the next generation of Zionists will ensure that change will come soon.

About the Author
Ari Hoffman is a senior at the University of Central Florida, set to graduate in May of 2014. Former Division I Collegiate football player with the UCF Knights, He is also the founder of the pro-Israel group on campus, called Knights for Israel, as well as the lead organizer for it. Additionally he is the Liaison to his group with CAMERA on campus.
Comments