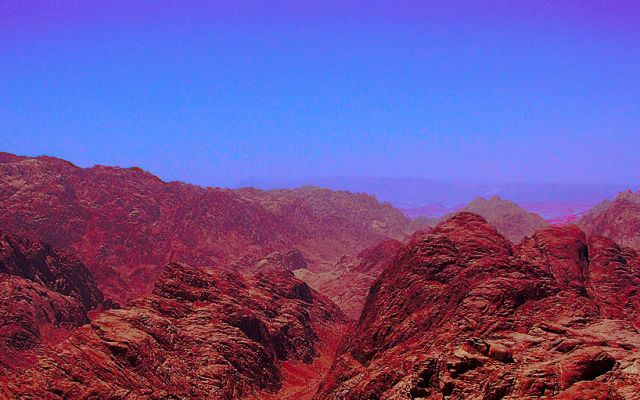 a view from Sinai, public domain, colorized by author

Poor Bil’am ben Be’or (aka Balaam), the prophet-for-hire who king Balak summons to curse the Israelites. Upbraided by his own donkey as he leaves home, then upbraided by Balak and sent home. Twice he seeks a prophecy from God through divination. Twice he “runs into” God and receives no curses, only words of blessing.

The third time, the Torah tells us that instead of going after divination (n’chashim, which can also mean “snakes”), he instead “set his face toward the wilderness, the midbar” (Numbers 24:1).

Bil’am is looking for real revelation this time, not manipulated speech, not any attempt to control divine forces, but an encounter with the divine. For the first time in his life, he understands that fully facing the midbar is the way to receive revelation.

That same lesson was derived by the rabbis from the fact that the Torah was given in the wilderness of Sinai, bemidbar Sinai.

Wilderness, unowned, unfarmed, unfenced, is the only place where the Torah could have been given, the midrash teaches, because true revelation likewise cannot be owned, nor can it be bought and sold. It can’t be given in a place that is anyone’s home, or any people’s home, because everyone must be able find a home in Torah. To be accessible to all humanity, Torah must be given in a place accessible to all humanity (Tanchuma, Bamidbar 6 and many other places).

Another word for this is “hefker”, which can refer to any ownerless or abandoned property. If something is hefker, anyone can take ownership of it by claiming it. However, wilderness is hefker in a more permanent way: though everyone can, from now til the end of time, lay claim to it in a spiritual sense, no one can ever really own it.

But even though we think there is land that we can “really” own (we even call it “real estate”)—land that’s settled, that’s not wilderness—that is also only a façon de parler, a quirk of speech. Not the truth, but a convenient fiction we delude ourselves with, in order to cover our eyes so we can denude the earth.

Undoing this delusion is a big reason why we have Shemitah, the Sabbatical year, and Yovel, the Jubilee year: they teach us that we can never own the land (Leviticus 25:23).

In the Shemitah year, there is no such thing as “No Trespassing”. On all the land we pretend to own, fences are taken down, wild animals allowed to roam through the fields, all people allowed to gather any fruit or vegetable they find, just as they could in any wilderness. Like the midbar — wilderness, every field must become accessible to everyone.

Midrash Tanchuma has a lovely, queer way of talking about this: “One who does not make themselves hefker like the wilderness will not be able ‘to own’ (or acquire, liknot) Torah” (Tanchuma, Bamidbar 6).

The midrash is dealing in paradox: to “own” something that can never really be owned, one must become like that thing. And I meant “queer” literally: the midrash and the Torah itself are queering Western ideas of property and ownership, unraveling them and showing that the binary opposition between “owned” and “owner” is NOT TRUTH.

Bil’am finally understood this: he does not own his own prophecy. Nor is he owned or beholden to anyone else, not to Balak, not even to himself and his own ideas about God. Now he “lifted his eyes” and saw: all Israel “dwelling (shokhein) by tribes” (Numbers 24:2). And though the text doesn’t say outright, it implies: dwelling in tents in the wilderness – the people has made itself like wilderness, or rather, God has led them to becoming like wilderness.

Wilderness is also paradoxical: even though the midbar is open to all people, and to all creatures, it remains a place that is inaccessible – because it lacks the necessities of civilized life. But God has provided those necessities during the forty years of delay, giving the Israelites a chance to fully embrace becoming hefker. God has similarly been a participant in the wandering, dwelling in a decidedly temporary shack, even if it be covered by the finest woven curtains.

Now Bil’am makes himself ready to enter that experience, to venture, even if only for a moment, into a realm where being a prophet will bring him no status, no reward, except the beauty and holiness of living in truth. Now Bil’am prepares himself to experience the transformation of midbar into its other, rare meaning: the mouth that speaks (Song of Songs 4:3).

At this point in the story, Bil’am describes himself paradoxically: he is “sh’tum ha’ayin” (Numbers 24:3), an odd phrase that may mean close-eyed or open-eyed, or perhaps, shutter-eyed, implying both (the word only appears in the Bible in this parshah, so its meaning is uncertain). Then he says that he “envisions, falling/fallen and revealed of eyes” yechezeh, nofel ug’lui eynayim (Numbers 24:4) – another phrase that’s hard to parse.

“Fallen but with open eyes” is the common interpretation – even though Bil’am is fallen, he is not looking down or away, but rather being present and seeing the divine reality, maybe for the first time. But gilui is itself another word for revelation. The “eyes of his eyes” are revealed, so to speak, so that they can receive revelation. I think of the e. e. cummings poem:

(i who have died am alive again today,
…this is the birth/ day of…the gay
great happening illimitably earth)

how should tasting touching hearing seeing
breathing any–lifted from the no
of all nothing–human merely being
doubt unimaginable You?

As for “falling”, we similarly say that God is the one who is “someikh hanoflim”, supporting those who are falling – commonly understood to mean the fallen, that is, downtrodden and oppressed. But learning from Bil’am and cummings, it can mean that all of us who are “human merely being” are always already falling. If not for the grace of YOU, we who are “tasting touching breathing” would return to the “no of all nothing”.l

It is one thing to be falling, another thing to see this, and another to know: those who know they are falling also know that the reason they are not yet fallen is because they are being lifted. Bil’am’s eyes are uncovered, opened, to this reality. Falling is not failing, it is, in a sense, all of being. Now he enters this reality, now he leaves behind society, now he starts “hearing God-speech and knowing the highest knowing” (Numbers 24:16).

Like Bil’am, like the Israelites, one who seeks revelation in wilderness must intentionally prepare themselves to leave society, at least for a time. But we were given a great gift through Shemitah: the very fields we think of as home become hefker, like a new Mt. Sinai, become a place where we can find revelation. We don’t have to leave society to experience divine reality if instead we can transform society.

To do this, we need to shift from “owning” to “homing” – to recognizing not just that the land is our home, but that it is the home of everyone, all species, all creeds, all “human merely beings” and all other beings. It is not place to withhold from others, but a place to return to. If we understand this, we can know what it means to make ourselves hefker, and thereby find our home in the Torah, and in the earth.

About the Author
Rabbi David Mevorach Seidenberg is the creator of neohasid.org, author of Kabbalah and Ecology (Cambridge U. Press, 2015), and a scholar of Jewish thought. David is also the Shmita scholar-in-residence at Abundance Farm in Northampton MA. He teaches around the world and also leads astronomy programs. As a liturgist, David is well-known for pieces like the prayer for voting and an acclaimed English translation of Eikhah ("Laments"). David also teaches nigunim and is a composer of Jewish music and an avid dancer.
Related Topics
Related Posts