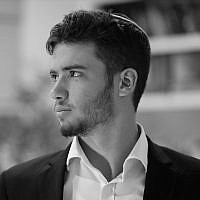 The Blogs
Jacob Malk
Apply for a Blog
Advertisement
Please note that the posts on The Blogs are contributed by third parties. The opinions, facts and any media content in them are presented solely by the authors, and neither The Times of Israel nor its partners assume any responsibility for them. Please contact us in case of abuse. In case of abuse,
Report this post.

As antisemitism once again rears its ugly head out on full display in recent weeks, it seems that the biggest enemy of these antisemites is also their biggest savior: the ADL. Once an organization created to help protect Jews, the ADL has long since abandoned this goal. Instead, the ADL chooses to be vocal about other common social and political issues such as voting rights, abortion, and LGBTQ rights. They masquerade as a Jewish organization for Jewish rights, yet use the Jewish donations they receive to fund their progressive agenda. To quote a friend of mine, “the ADL used to be a Jewish organization run by leftists, now it is a leftist organization run by Jews.” Now more than ever, the new head of the ADL, Jonathan Greenblatt, continues to funnel money intended for Jewish causes towards his own political agenda.

Most notably, 4.8 million elementary school students were exposed to an “anti bias” curriculum created by the ADL in 2021; a Fox News investigation discovered that the curriculum resembled critical race theory. In addition to teaching elementary school students about transgender surgery and recommending books like Julian The Mermaid and other books that educate children that “whiteness is the foundation of racial injustice,” this ADL curriculum also teaches that white people are inherently racist and privileged. Unfortunately, it has become evident that the ADL is nothing but a partisan organization being used to further liberal ideas.

The ADL disguises widespread political and social issues as “Jewish issues” in order to use its platform to promote these concerns. These issues rarely have implications for Jews, and it is dangerous for a Jewish organization to take a controversial stance on a political issue when it does not concern Jews or Jewish values. However, Mr. Greenblatt continues to use his platform to push for all kinds of far-left ideas. Unfortunately, many people mistakenly believe that Mr.Greenblatt speaks for all Jews. When hearing him represent controversial political beliefs, people begin to wrongly associate Mr.Greenblatt’s views with that of the entire Jewish people which further spreads antisemitism. While fighting for the rights of other minorities is certainly a good thing to do, it is important to remind ourselves of the purpose the ADL serves, to first and foremost protect Jews from the outstretched claws of Jew hatred from all sides of the political spectrum. There are other organizations determined to help other minorities, and it is not the ADL’s job to fight for them at the expense of helping Jews. The ADL is using vast sums of money acquired under the guise of a Jewish organization to fund modern political movements such as BLM and other similar organizations. Not only does this support for other anti-hate organizations come at a cost to the Jewish community, several of these groups supported by the ADL have had many anti-semitic instances linked to their organizations such as vandalism of synagogues and support for the anti-Semitic BDS movement.

The ADL has been profiting heavily due to Greenblatt’s presence since he joined in 2015 after leaving his post working in the Obama administration. Many billionaires, politicians and companies donate millions to the ADL yearly, including Jewish billionaire George Soros. Due to this, the ADL is being led around like a puppy dog on a leash in whichever direction one of their donors wishes. Although Soros also gives millions of dollars a year to some extremist organizations, such as anti-zionist organizations, any criticism of Soros will undoubtedly be met with accusations of “antisemitism” from Greenblatt and the ADL; as a result, these donations essentially give Soros immunity from legitimate criticism. Of course, much like a broken clock, the ADL is right twice a day, or twice a month. They still speak out against antisemitism, but unfortunately they focus their efforts on issues not concerning the Jewish community or on useless celebrity condemnations.

The reason why the ADL is the messiah to the celebrities drunken with Jew hatred is because the ADL immediately denounces celebrities who make anti-Semitic statements, but for a sizable sum of money and a feeble apology, these “charges of antisemitism” can be “dropped.” Mr. Greenblatt is the judge, jury and executioner, and only he can retract these accusations of antisemitism. However, as the ADL moves closer and closer to becoming a fully fledged partisan organization, the ADL has become increasingly more hesitant to call out antisemitism from the political left, while at the same time, doubling down on their efforts to attack any right wing politician they disagree with.

The ADL tried to block Mike Pompeo’s confirmation under the false guise of labeling Pompeo as an Islamophobe. Similar cases of the ADL abusing its power as a Jewish anti-hate organization include attacks on many other conservatives, including Fox News political commentator Tucker Carlson. Greenblatt personally attempted to get Carlson fired from Fox News after outlandish claims of antisemitism by the ADL. In response, a group of 1,500 orthodox rabbis wrote a letter slamming the ADL for trying to falsely portray  Mr. Carlson as an anti semite. The letter further bashes the ADL for remaining quiet on antisemitic hate from the left, but being adamantly vocal about right wing politics, even when not concerning antisemitism: “Alas, the ADL has become markedly partisan under your leadership,” the letter charged. “Your organization published the guide, Naming the Hate, which features obscure neo-Nazis of the ‘alt-right,’ yet says nothing regarding the far more dangerous, leftist adherents of radical Islam. Similarly, the ADL denounced Brett Kavanaugh, but not Linda Sarsour.”

By choosing to stay silent on left wing antisemitism, the ADL is complicit in their hate. And on the opposite end, when the ADL uses their platform to label republicans they don’t agree with as anti semites, it cheapens the impact of actual instances of antisemitism. The credibility of actual accusations of antisemitism may be damaged, and it becomes more difficult for people to take these accusations seriously when they are made on the basis of political orientation.

Since 2015, when Greenblatt took over the reins from former CEO Abe Foxman, the ADL’s revenue was around double that of the previous year. Because of this, it is likely we won’t  see a new head of the ADL anytime soon. However, one thing is clear: the ADL needs to change.

About the Author
Jacob Malk is 18 years old and a senior in high school in Los Angeles California. He is a history buff, a zionist, and a patriot. He intends to complete his Jewish education in a Yeshiva next year, and then, G-d willing, he hopes to join the Isreali army.
Related Topics
Related Posts
Jacob Malk