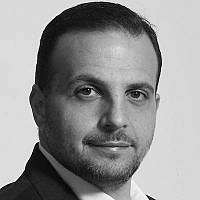 The Blogs
Royi Markowitz
Apply for a Blog
Please note that the posts on The Blogs are contributed by third parties. The opinions, facts and any media content in them are presented solely by the authors, and neither The Times of Israel nor its partners assume any responsibility for them. Please contact us in case of abuse. In case of abuse,
Report this post.

As a product of the private and public school systems of New York, I’ve studied the rights and freedoms the constitution of the United States grants us. One of these rights, the freedom of movement, has been essential to make the U.S. a thriving democracy and economy. Otherwise, how can you pursue happiness without being able to pursue it? Another example is the substantial economic impact the Schengen Agreement brought to Europe. Countries that have given their citizen this basic right and enhanced it with agreements between countries to provide their citizens with easy travel internationally have strengthened the local economy. 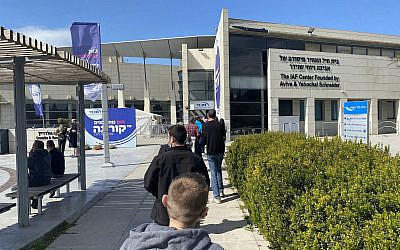 Israelis stand in line to get vaccinated in a Maccabi vaccination center in Herzliya, February 2021 (private photo).

The ability to expand your business reach, engage with companies and persons around the world has created wealth and opportunity. If you look at countries that have not granted this basic freedom, you will most probably also find them at the bottom of any list of economic ranking.

But then came the Covid-19 pandemic which has put the world on lockdown in fear of importing more cases of the virus and in hope of controlling the spread. According to the UN’s air transport agency, air travel fell around 60% to levels last seen in 2003. The freedom of movement has been put on hold and we are all stuck at home with fragmented ability to travel domestically, and even worse, internationally. Here in Israel, the situation is the same, we have gone through 3 major lockdowns and the number of tourists visiting Israel dropped by 81%.

Then came the world’s most successful Covid-19 vaccination campaign

This is where Israel’s opportunity comes in and improves its return on investment of the higher-than-average price it paid for the Pfizer vaccine. The world’s most successful Covid-19 vaccination campaign has fully vaccinated over 90% of those aged 50+ and over 50% of the total population have received at least one of two Pfizer shots. By quickly vaccinating its population, Israel has in turn returned to its citizens the freedom of movement. Cafes, restaurants, hotels, schools, concerts, and virtually all the things we have missed are coming back to normal.

However, more importantly, Israelis now hold the “Green Passport”, a document that today might be more valuable for your career than an MBA. The ability to start traveling is a unique opportunity that can bring in more economic opportunities than the discovery of the off-shore gas fields. The ability for business people to travel while most of the world has restrictions is a substantial advantage that I am sure wise entrepreneurs and business people in Israel will know how to take advantage of. However, in order to fully take advantage of this opportunity the government in Israel needs to take several steps:

1) Continue the vaccination campaign and make sure Israel has enough stockpile of vaccine for the yearly shot which seems more realistic today.

2) Export the “Green Passport”, the government must make sure that countries accept Israel’s Green Passport and recognize vaccinated persons to offer them open borders.

3) Substantially increase flight routes into and out of Israel while continuing to expand direct destinations.

4) Rapid Testing, finally put in place an efficient and safe process for all travelers in and out to get tested at the border.

If the government doesn’t fumble on this opportunity, not only can Israelis take advantage of new business opportunities better than most of the world, but vaccinated Israelis might become sought out by international firms to travel and represent them in locations they might have difficulties sending employees because of restrictions.

If the government really wants to put this opportunity on steroids, I would consider drastically reducing the cost of flights for business travel and do everything it can to make it cheap and easy for Israelis to travel internationally. A little bit like what the Chinese government did with the terminal dues pricing, when it negotiated with the Universal Postal Union, the international body that oversees mail exchanges. This made it cheaper to send a package from Beijing to New York than from New York City to Los Angeles. This gave a substantial boost to its local manufacturing and production. Make it cheap to send Israeli businesspeople anywhere in the world, add in the Green Passport, and in no time, Israel will earn back the cost of the vaccination campaign and create a new economic opportunity.

In conclusion, the start-up nation has an incredible opportunity in its hands, as a nation of entrepreneurs and believers. I hope the government, during a time of elections and political turmoil, will act properly to take advantage of a once in a lifetime opportunity.

About the Author
Royi is an entrepreneur and executive, raised in New York, moved to Israel in 2004. Served in the intelligence unit 8200 as a lone soldier. In 2008 founded Envision Ventures a corporate recovery and investment advisory firm. Sold the company in 2013 and began working in the Prime Minister’s Office. In 2019 returned to the investment and advisory world. Founder and partner in Up Capital a fintech company. Married to Keren and father of 3.
Related Topics
Related Posts
Comments