One of the tenets of United Hatzalah is that it is a community-based organization. That means that the organization works with the community and for the community, in whatever capacity is needed. Although the main focus of United Hatzalah’s work is life-saving and emergency medical care, its individual chapters all over the country generally have their finger on the pulse of the general needs of their communities as well. 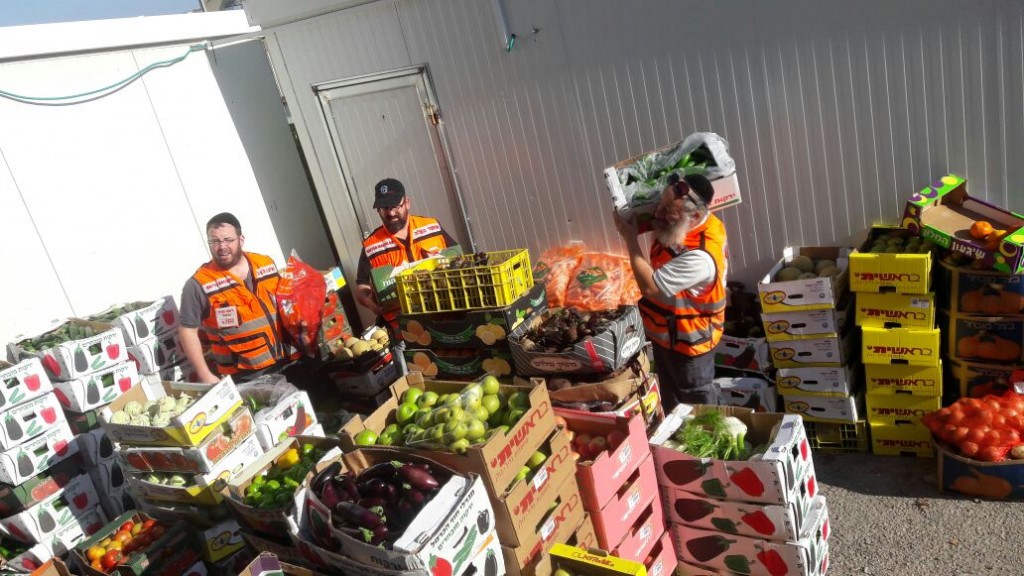 United Hatzalah of the Carmel Region collecting food to donate to families in need this holiday.

This past week, numerous United Hatzalah’s chapters decided to take their volunteering to a new level. Naftali Rotenberg, who heads the Carmel regional chapter, led and managed a Pesach project that provided local families in need of financial help with basic food staples before the holiday. Rotenberg and his co-volunteers spent the past week collecting funds from various local business owners and community residents and then immediately used the funds to purchase basic necessities for the Pesach holiday. The volunteers packaged the purchased Pesach staples (such as Matzah, wine, eggs, chicken, fruits and vegetables,) and delivered them to dozens of families in and around Haifa who are in dire need of financial help to prepare for the holidays. More than 10 tons of food were donated, purchased, and distributed. The chapter volunteers also collected leftover packaged food from the recent Purim holiday that families had not eaten and distributed the appropriate food to long-term hospitalized children.

Rotenberg said, “Since we see members of our community in the worst of situations and we are part of the security and medical forces that help them every day, we wanted to help them in ways that go beyond emergency medicine and reach out to make a difference for those who financially need it most as well. That is what we are about, saving lives and helping people. So that is what we did. In addition to having our EMTs save lives, we set out with both of these campaigns to help people by bringing them food before the holiday. While the holiday season can be a burden on any family, it shouldn’t be oppressive to anyone for a lack of proper resources.”

The Carmel wasn’t the only chapter of United Hatzalah collecting food for the needy in their community this holiday season. Effi Feldman, chapter head of Bnei Brak, ran a similar campaign to the one that took place in the Carmel. Feldman and volunteers from Bnei Brak collected food that would have otherwise been thrown away and also distributed it to sick people in hospitals. “Everyone wanted to get involved,” said Feldman, “it was a true community effort. One of our volunteers visited a local Kindergarten class where the children packaged bags of candies and snacks for sick kids in Mayanei HaYeshuah Hospital in Bnei Brak. It was really special to see how much people wanted to help one another. All we really had to do was get the ball rolling.”

Rotenberg said that “In United Hatzalah, our volunteers are more than simply EMS responders, we are members of our communities with the responsibility to help whoever we can.”

Other food drives were spearheaded by volunteers in other locations across the country. Another notable campaign took place in Jerusalem, where senior EMT Daniel Katzenstein, started a MyMitzvah project to collect food for local families in his neighborhood of Neve Yaakov. President and Founder Eli Beer is also running his own annual Pesach drive aimed at helping to raise funds that will be distributed to EMS volunteers who themselves are in financial stress, in order to give them some relief this Pesach holiday.